'Romani Bambino' statue brought back home to Gaziantep after 85 years 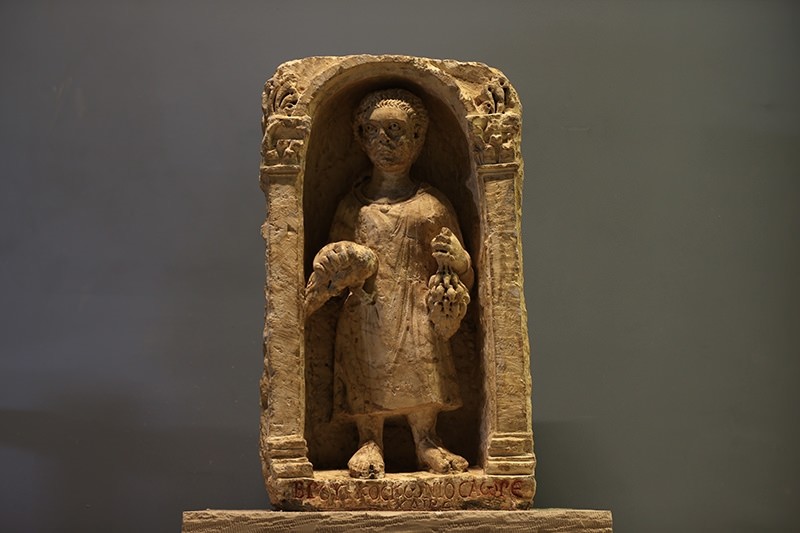 The ancient statue of "Romani Bambino," a Roman child holding a cluster of pistachios, was finally brought back home after 85 years.

"I am proud to announce that the Romani Bambino statue, found in the Ancient City of Zeugma in 1931, has been brought back to Gaziantep. I am thankful to the Minister of Culture. After 85 years of longing we got our statue back. The Romani Bambino statue will be the symbol of the city after the Gypsy Girl statue. We will also replicate the statue and exhibit it in Pistachio Park for the Pistachio Festival," Gaziantep Metropolitan Municipality Mayor Fatma Şahin said at a press conference organized to showcase the statue.

The statue, currently on display at Zeugma Mosaic Museum, was first unearthed in the Ancient City of Zeugma in 1931, but due to the lack of museums in southeastern Gaziantep province, the artifact was transferred to Adana Museum in southern Turkey.

The Zeugma Mosaic Museum, the biggest mosaic museum in the world, is also currently holding a mosaic exhibit called "Come lay a stone for the path of peace."

The ancient city of Zeugma, also known as the village of Belkıs, is located 45 kilometers away from Gaziantep close to the town of Nizip on the Euphrates.

Zeugma is one of Turkey's primary archaeological and historic sites, dating back to the times of Alexander the Great.

Zeugma is among the four most important historical settlement areas under the reign of the kingdom of Commagene. Originally named "Seleukeia of Euphrates," the city was renamed Zeugma, meaning bridge of boats, after being conquered by the Roman Empire.