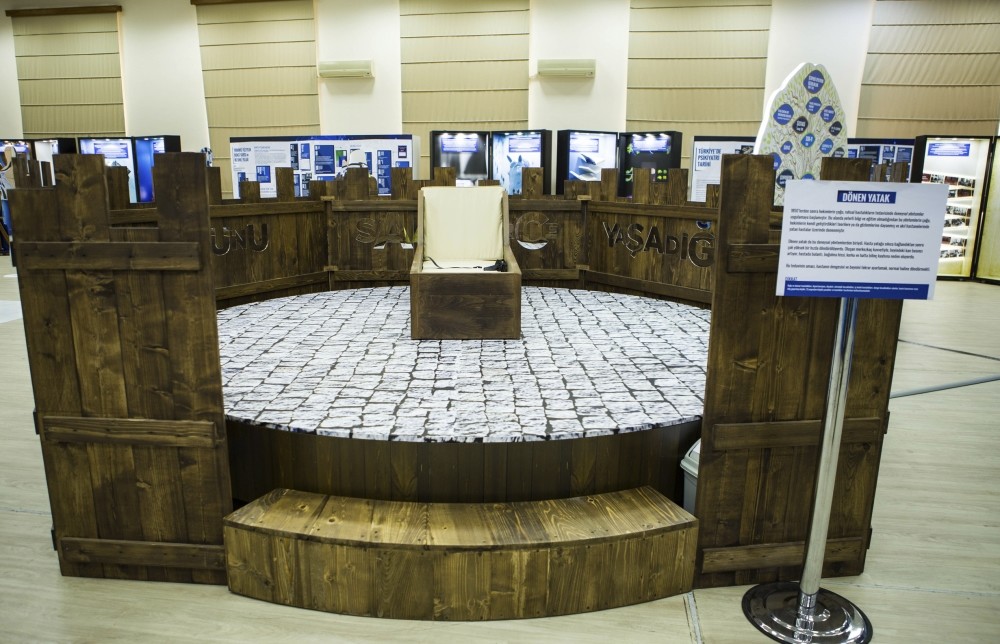 Kocaeli Science Center is currently hosting an exhibition titled ‘Do Not Ignore: The Adventure of Schizophrenia from the Early Ages to the Present,' displaying historical reflections and various treatment techniques applied around the world

The diagnosis and treatment of mental illnesses from early ages, people's approach to mental illnesses and scientific studies done by physicians and scientists for centuries are being displayed with interesting visuals and animations at the "Do Not Ignore: The Adventure of Schizophrenia From the Early Ages to the Present" exhibition in Kocaeli. Held at the Kocaeli Science Center, the exhibition is a first for Turkey with its rich content composed by experts and creative presentation using 3D boxes, visual and audio effects and animations. The exhibition not only promises to display what happens to schizophrenia patients but also to help them experience what they feel as well.

The "Do Not Ignore" exhibition, which opened its doors in Kocaeli on Dec. 3 following exhibitions in Istanbul, Ankara and İzmir, will remain open until Jan. 3, 2017.

Tuna Yavuz, the General Manager of Abdi İbrahim Otsuka, commented on the exhibition and said its aim is to raise awareness of schizophrenia. "There are nearly 51 million people suffering from schizophrenia while there are 600,000 people diagnosed with schizophrenia in Turkey. However, this number in Turkey rises when people who hide their illness due to social pressure are included. Schizophrenia patients and their families have to fight the illness as well as the prejudice of the public. Our company initiated a project - 'Do Not Ignore' - to raise awareness of patients with schizophrenia who want to continue their lives as normally as possible and support their existence in society. We plan to hold this exhibition around the world starting from Japan after it travels throughout Turkey. Holding this exhibition in Kocaeli is very important for us," Yavuz said.

"Do Not Ignore," which is a revolutionary exhibition in Turkey, offers its visitors a chance to experience what patients with schizophrenia feels in the height of their illness via the "Empathy Cabin." This cabin is dark and isolated from all outside noise and aims to help visitors empathize with schizophrenia patients by projecting visual and audio scenes representing what patients feel and go through.

The "Rotating Bed" and mirrors are also objects in the exhibition attracting the attention of the visitors. The "Rotating Bed" is one of the best examples of what patients with schizophrenia had to endure during a time when there was not enough scientific evidence on the illness and the doctors had limited treatment options. In the treatment, which was used on patients with schizophrenia in the 1850s, the patient was put to lay down in the center of the mechanism and tied down. The doctors aimed to increase blood pressure in the brain and help patient to regain his or her balance with the centrifugal force that was created with the rotation speed of the bed. However, the patient showed signs of nausea, zonesthesia, fear and loss of consciousness during the treatment. To demonstrate this treatment, a bed that rotates slower than the actual mechanism is installed in the exhibition venue.

Moreover, pieces of mirrors which are cut in shapes of people are dispersedly placed all around the exhibition venue to remind visitors schizophrenia is seen one in every 100 people regardless of sex or race as well as cultural, educational, social and economic background.

"Do Not Ignore: The Adventure of Schizophrenia From Early Ages to Present" exhibition can be seen every day between 9 a.m. and 6 p.m., except for Mondays, until January.
RELATED TOPICS