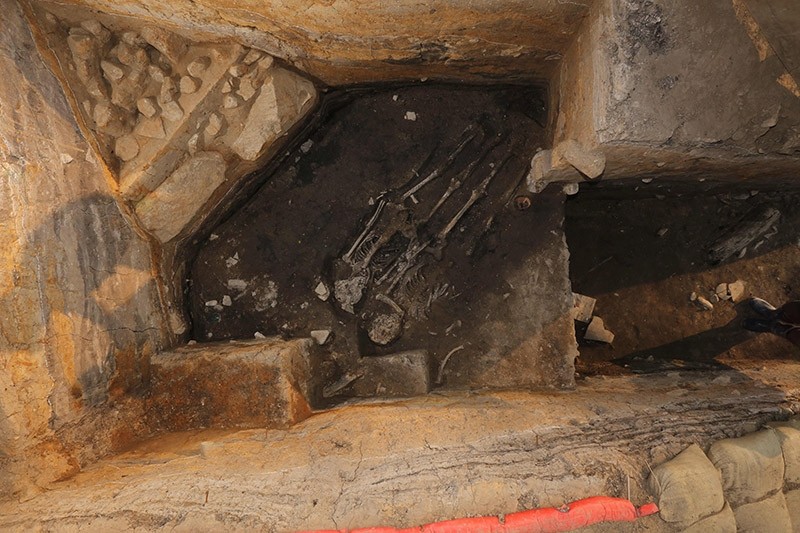 Archaeologists have discovered remains in South Korea indicating for the first time that human sacrifice was used before setting out on ancient construction projects to ensure the success and prosperity of buildings, dams, or walls, officials said Tuesday.

Two skeletons dating from the 5th century were found under the walls of the Wolseong, or Moon Castle, in Gyeongju in South Korea, the capital of the former Silla kingdom, Seoul's Cultural Heritage Administration said in a statement.

"This is the first archaeological evidence that folklore about humans being sacrificed for the foundations of buildings, dams or walls were true stories," spokeswoman Choi Moon-Jung of the Gyeongju National Research Institute of Cultural Heritage told AFP.

The burial of living victims with dead kings to serve them in the afterlife is well known in ancient Korean cultures.

How the Wolseong victims were put to death was not yet clear and further research was being carried out, but they did not appear to have been buried alive.

"Judging from the fact that there are no signs of resistance when they were buried, they must have been buried when they were unconscious or dead," said senior researcher Park Yoon-Jung.

"Folklore indicates humans were sacrificed to appease gods and plead with them to ensure the structures being built lasted a long time."

The two skeletons were found side by side under a western corner of the castle's earth and stone walls, with one facing upward, the other turning its face and arms slightly towards the first.

The Silla kingdom was one of three that emerged on the Korean peninsula in the first millennium, eventually conquering the other two to unify the territory in 668. It later split up and was finally overwhelmed in 935.

Artefacts from the period include some of Korea's most precious cultural treasures and the historic sites of Gyeongju are a major tourist attraction.

DNA and other tests were being carried out on the remains to determine their physical characteristics, health, diet and genetic attributes.

Other finds included wooden inscription tablets and 6th-century animal and human figurines, including one whose turban and clothing appeared similar to those worn in the ancient Central Asian civilization of Sogdiana.