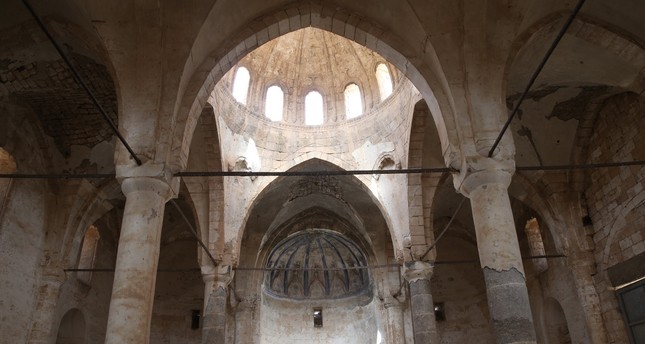 The historical Germuş Church in southeastern Turkey's Şanlıurfa, which is believed to be the birthplace of the Prophet Abraham, will soon be opened to tourism after some extensive renovation.

Located 10 kilometers northeast of the city center and on the edge of Germuş Mountain, the historical church has stood the test of time. The date of its construction date is not precisely known, as there are no inscriptions, but the church is estimated to be built at the beginning of the 19th century. The structure has a facade that rises on three pointed arches.

The historical church partly lost its original character due to alterations carried out at different times. It is only 5 kilometers away from Göbeklitepe, which is often described as "the cradle of human civilization." The area where the church is located stands out with various old buildings and tunnels.

The Haliliye District Governorship is carrying out a thorough restoration as part of its "Hidden History: Germuş" project, which falls under the "Tourism Routes and Smart Cities Financial Support Program" and is approved by Karacadağ Development Agency. 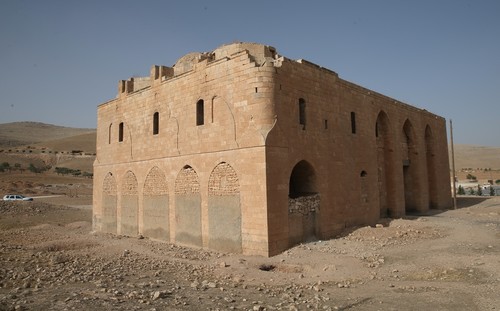 Haliliye District Governor Ali Yılmaz Told Anadolu Agency (AA) that they want to open Germuş Church for tourism and are working to that end.

Yılmaz added that they are working to give the church a beautiful appearance. "The renovation, cleaning, lighting and environmental management of the church will be carried out within the scope of the project. Hopefully, Germuş Church will gain a new look and make some contribution to the tourism sector. I congratulate those who worked for the success of this project," he said.

The Chairman of the Regional Tourist Guides Chamber, Müslüm Çoban noted that Armenians used to live in the surrounding area of the church. "The old houses and underground structures in the region should also be opened to tourism," he said.

Çoban said that they believe that Germuş Church will especially draw the attention of foreign tourists. "Unfortunately, the building, which has not undergone maintenance in years, is badly damaged. In this respect, the renovation of the church is very important. It is a very good decision to open the church to tourism after the renovation. This region and its churches are important for Christians.

"There are two churches in the village but the smaller one is almost completely destroyed. The Armenian Church is still standing. If there is more than one church in one place, this indicates its importance. The opening of the church to tourism will attract the attention of many foreign tourists. More foreign tourists started to come here after Göbeklitepe was included in the UNESCO list. They will also visit Germuş Church. This means that tourists spend more time in the city. The region close to Göbeklitepe on the Mardin route will contribute a great deal to tourism. The history of the Region will come forth with more excavations carried out in the future," he added.

Casım Acar, who is the guardian of historical sites and Germuş Church, noted that they have been fighting people who tried to carry out illegal excavations in the region.

The plan to open the region for tourism was great news according to Acar. "Legends have it that the church was built in seven years with stones from these mountains. Our elders tell us that this village had an important place in the past. There are underground bazaars, tunnels and various structures here. Tourists, mostly foreigners, who come to Göbeklitepe come here first, but its state of disrepair is unfortunate. Hopefully, the restoration will revive its historical and cultural value," he said.

Share on Facebook Share on Twitter
Previous in History Six statues dating back 2,000 years were discovered Saturday in the... Next in History An extraordinary museum in the Turkish capital Ankara takes visitors...
DAILY SABAH RECOMMENDS