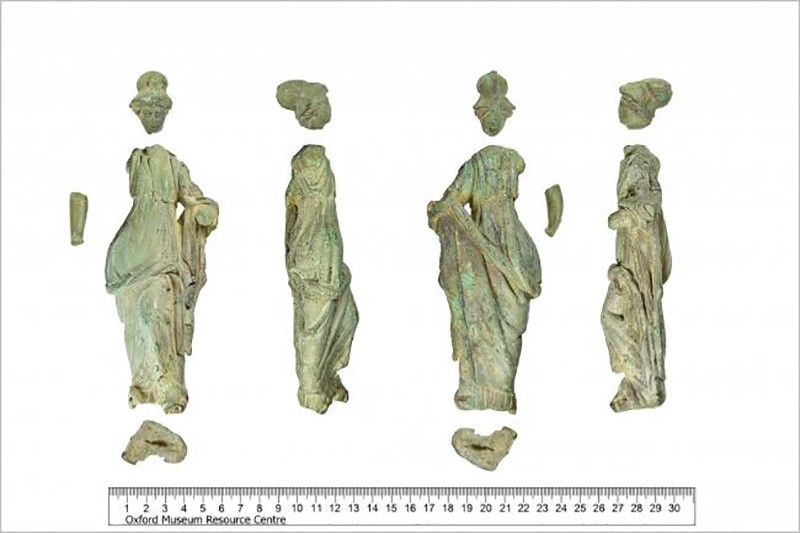 An ancient statue of the Roman goddess of wisdom Minerva was found in an old margarine tub along with some gold coins in the English countryside, as presented by the British Museum in London on Tuesday.

Len Jackman, a retired truck driver and amateur metal detectorist, discovered the statue on a local farmer's land in rural Oxfordshire in South East England, according to CNN.

The 66-year-old man told CNN that he was invited to detect on the land as the farmer said "he'd had other detectorists before."

"He then produced this statue out of an old margarine box, saying it was found on his land," Jackman said.

Jackman guessed the statue was Roman. He took it and other artifacts discovered on the land to the Museum Resource Center in Standlake, where they were dated and identified.

Last year, 78,000 archeological items have been unearthed by the British public and voluntarily recorded with the Portable Antiquities Scheme, managed by the British Museum. Like Jackman's find, 93 percent of these items were discovered by metal detectorists.

2017 was a record-breaking year for treasure – a category including coins or items made of gold or silver which are more than 300 years old. Some 1,267 of the last year's discoveries were categorized as treasure, and the statue is likely to fall into that category as well.

A spokesman for the British Museum told CNN: "When a potential treasure find is reported to the local Finds Liaison Officer, which they must do by law, it begins a process whereby the objects will be assessed by various experts including our curators here at the British Museum."

"At the end of the process, there is an inquest where a coroner will declare the find to be legally treasure," he said.

The Minerva statue is still in the process of being defined as treasure and hasn't been assigned a price tag, but "a number of museums are already interested in acquiring it," the spokesman said.

Minerva was known as the Goddess of Wisdom in ancient Roman belief, overseeing trade, arts, war strategy, medicine and poetry.

The Roman deity was highly influenced by Greek goddess Athena, sharing many of the same characteristics and duties. Minerva was of key importance for the Romans, and was part of the "Capitoline Triad" alongside Jupiter and Juno.

Britain was conquered by the Roman Empire following the order of Emperor Claudius in 43 A.D., although the famous Julius Caesar had paid earlier visits to the island in 55 and 54 B.C. The Romans first established control over the tribes of present-day southeastern England, where the Minerva statue was found.

During the 70s and 80s, the Romans, under the command of Gnaeus Julius Agricola, extended their control into northern and western England. During their occupation of Britain, the Romans expanded the civilization there, particularly by developing cities.