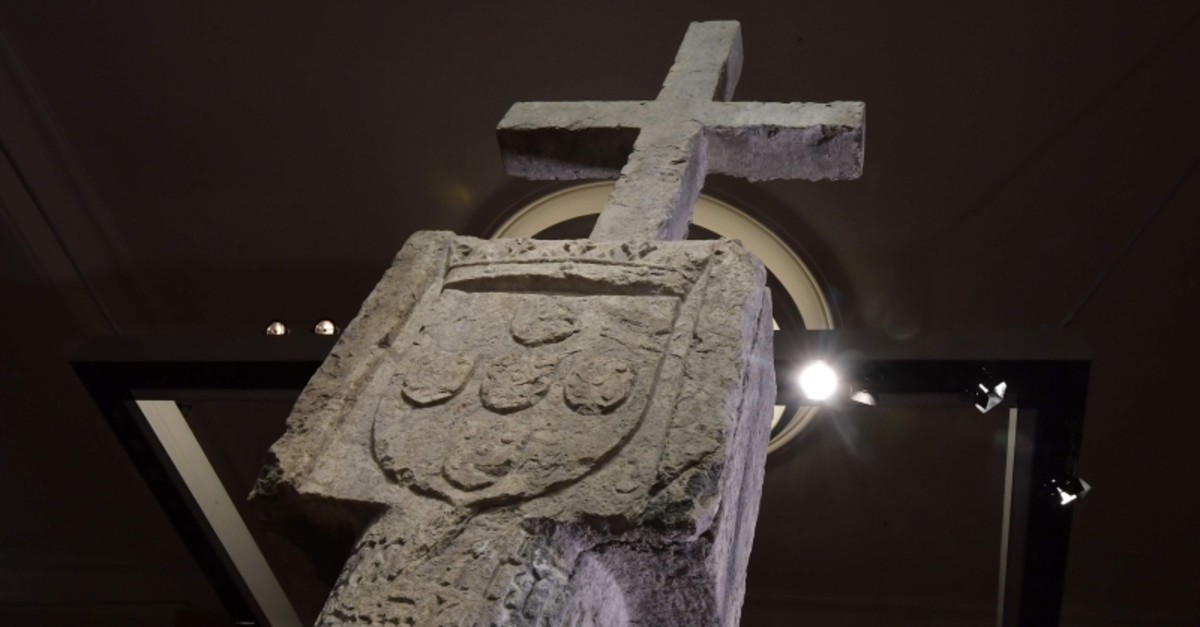 A picture taken on May 17, 2019 in Berlin shows a Stone Cross, a key 15th-century navigation landmark erected by Portuguese explorers, seen at the History Museum in Berlin (AFP Photo)
by May 17, 2019 10:01 pm

A German museum said Friday it would return to Namibia a 15th-century navigation landmark erected by Portuguese explorers as part of Berlin's efforts to face up to its colonial past.

"The restitution of the Stone Cross of Cape Cross is a clear signal that we are committed to coming to terms with our colonial past," said Culture Minister Monika Gruetters.

"For too many decades, the colonial time has been a blind spot in our remembrance culture."

Placed in 1486 on the western coast of what is today Namibia, the Stone Cross was once considered to be such an important navigation marker that it featured on old world maps.

In the 1890s, it was removed from its spot on Cape Cross and brought to Europe by the region's then German colonial masters.

Since 2006, it has been part of a permanent exhibition of the German Historical Museum in Berlin.

The return of the cross marks a concrete step to make good on Germany's pledge to accelerate the return of artifacts and human remains from former African colonies.

For Andreas Guibeb, Namibia's ambassador to Germany, the restitution is "important as a step for us to reconcile with our colonial past and the trail of humiliation and systematic injustice that it left behind".

"Only the confrontation and acceptance of that painful past will liberate us to consciously and confidently confront the future."

In a column in the Frankfurter Allgemeine Zeitung, the president of the museum's foundation, Raphael Gross, noted that the Cross "is one of the very few objects that documents the occupation of the country by the Portuguese".

Berlin ruled what was then called South West Africa as a colony from 1884 to 1915.

Germany has on several occasions repatriated human remains to Namibia, where it slaughtered tens of thousands of indigenous Herero and Nama people between 1904 and 1908.

The German government announced in 2016 that it planned to issue an official apology for the atrocities committed by German imperial troops.

But it has repeatedly refused to pay direct reparations, citing millions of euros in development aid given to the Namibian government.

Guibeb said "huge progress" had been made in recent years on finding a common language to describe the mass killings, even if he acknowledged that it would take more time than the public would wish.

But in Windhoek, some felt the process was taking longer than they hoped.

Former culture minister Kazenambo Kazenambo told AFP the latest return was welcomed, but that he was "however unhappy that Germany is returning colonial things one by one".

"We have had genocide negotiations for the past five years. Why can't they address all the issues holistically?"

For Cameroon's Prince Kum'a Ndumbe III, who had traveled to Berlin especially to witness Friday's announcement, "what has happened here is fundamental".

"This is the direction we have been seeking for the last 30 years, now we have to see how far we will go," he said, adding that he has been pressing a German museum for the return of a family object for years.

Beyond what is now modern-day Namibia, the German empire also held the colonies of Togoland, now Togo, Kamerun (Cameroon) and Tanganyika (Tanzania), as well as some Pacific islands, until World War I.