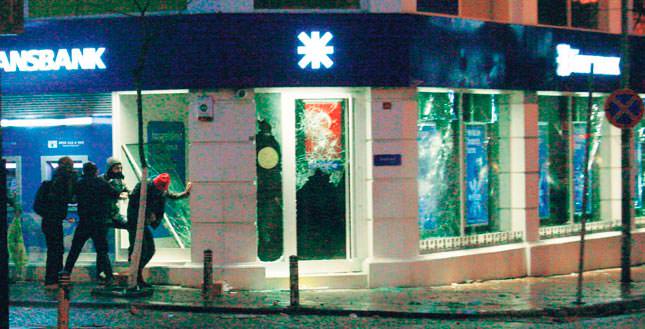 by Mar 03, 2014 12:00 am
Istanbul (Daily Sabah) - A group of people supporting the Kurdistan Workers' Party (PKK), a terrorist organization, threw firebombs at a bank branch in Istanbul's Aksaray district yesterday. Demonstrators carrying posters of jailed PKK leader Abdullah Öcalan, converged on a street in the district for an unauthorized rally and chanted slogans in favor of the PKK. As Turkish riot police moved to disperse the group with water cannons and teargas, the crowd hurled stones and firebombs in return. Hours after the police pushed back the demonstrators, the group returned to the area as the police eased security measures. They again tossed several firebombs at the same bank.

Turkish police detained some protesters while others fled the area. Security measures were increased in the district following the incidents. The violent demonstration came two weeks after PKK supporters took to the streets in cities across southeastern and eastern Turkey to mark the 15th anniversary of Abdullah Öcalan's capture in Kenya.

While Öcalan, who was sentenced to life imprisonment remains in prison, the government in 2012 announced a reconciliation process to end Turkey's decades-old Kurdish question.

The PKK, whose members are based in Northern Iraq, have significantly decreased their attacks on Turkish soil after the announcement of the reconciliation process, but the outlawed group maintains a large number of supporters across Turkey. In their latest attack, the PKK opened harassment fire on Turkish troops from the Iraqi side of the Turkish-Iraqi border last week, to prevent the construction of a new security post there. Also yesterday, three PKK members captured a village headman in the Çukurca district of the southeastern Turkish province of Hakkari.