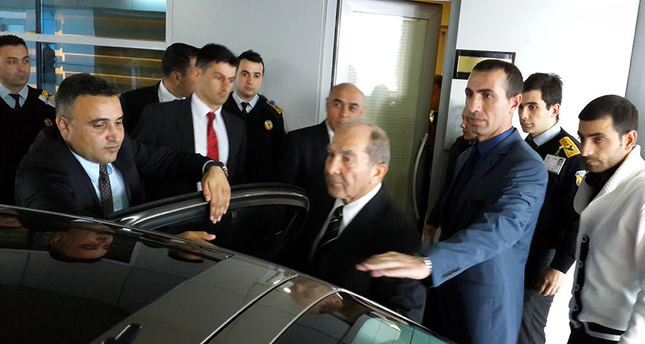 by daily sabah
Nov 03, 2014 12:00 am
An Istanbul court resumed the trial of 236 defendants in the "Sledgehammer" coup plot case five months after all defendants in detention were released.

Defendants including retired senior military officers are charged with plotting a coup to overthrow the Turkish government.

Families and friends of defendants swarmed the courthouse complex on Istanbul's Asian side as the hearing began.

Former Chief of General Staff Hilmi Özkök and former Land Forces Commander Aytaç Yalman also took the stand to testify as witnesses in the case. They told the court that they had never heard of a coup plan during their tenure and they were only aware of news reports regarding a coup plot.

A court had handed down prison terms ranging from six to 20 years for defendants in September 2012 for attempting the overthrow the regime. The Constitutional Court overruled the ruling in June, citing that the defendants' rights were violated and ordered their release.

The court said the ruling was based on the breach of the defendants' rights concerning "digital data" collection and wiretapping against them. It also cited that former Chief of General Staff Hilmi Özkök and former Land Force commander Aytaç Yalman were not summoned to the court as witnesses despite requests by the defense.

The case was nicknamed the "Sledgehammer of Balyoz" in Turkish after a controversial daily published a 2010 report on the Balyoz Operation Plan, an alleged coup plot by top military brass drafted in 2003. Soon after the daily published the report, the defendants were arrested in nationwide operations. The defendants had claimed that the plan was a theoretical exercise and part of a scenario for security measures in case of a deteriorating security situation. According to the alleged plan, the military would incite chaos through violence, including bombing mosques in Istanbul and deliberately downing a warplane over the Aegean Sea.

Defendants have long claimed that the case against them was based on fabricated evidence and aimed to cripple the armed forces by imprisoning top generals and military officers.

Dursun Çiçek, a prominent colonel who is among defendants, told reporters after his release that they were imprisoned by the "parallel structure," a name attributed to infiltrators of the controversial Gülen Movement in the judiciary and police. The Gülen Movement is accused of being a major force behind a series of trials targeting military officers through "forged" evidence according to their critics. The Constitutional Court itself said in its earlier ruling for the release of defendants that their rights were violated by "digital data collection" and wiretapping of defendants. Lawyers for defendants have earlier claimed that the evidence such as a hard drive allegedly including documents related to the coup plot were tampered with. A report by the Scientific and Technological Research Council of Turkey (TÜBİTAK), the top state authority on the issue, indicated that files were loaded to the hard drive with evidence after the arrest of defendants.