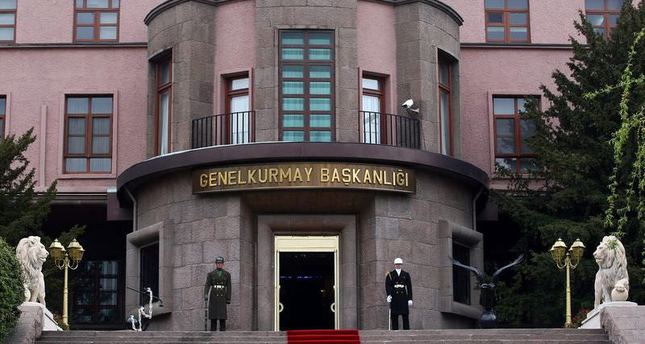 by daily sabah
Nov 22, 2014 12:00 am
The Turkish Armed Forces (TSK) published a press statement on their website Saturday in regard to allegations claiming the existence of a Gülenist structure within the institution.

The press release also said: "It should not be forgotten that the Turkish Armed Forces is the most determined organization that fights against those who abuse ethnic or religious structures that function outside the formal state structure."

The press statement, published on the TSK website, also said that the organization has started a highly detailed administrative and legal investigation in regard to allegations of a "parallel structure" and continues to intensify its efforts in the matter.

The Gülen Movement is seen as a national threat by the government since the movement is accused of wiretapping thousands of people including government officials, encrypting phones and allegedly infiltrating state institutions with the aim of overthrowing the government. The movement is led by retired imam Fethullah Gülen who lives in self-imposed exile in the U.S.

Government officials have continuously expressed their determination to continue to lawfully fight against the Gülen Movement whose followers are accused of illegal wiretapping, forgery of official documents and spying.

A recent report prepared by the Interior Ministry said that dozens of police officers with alleged links to the Gülen Movement illegally wiretapped thousands of people in a "systematic and organized" manner for purposes of espionage. According to the report, some officers were involved in irregularities like tracking people's conversations, wiretapping, recording conversations and tracing the location of phone calls through GPS signals. Erdoğan recently requested the extradition of Gülen both privately and publicly from the Barack Obama administration, and accused Gülen of plotting a judicial coup against the government prior to the local elections last March.