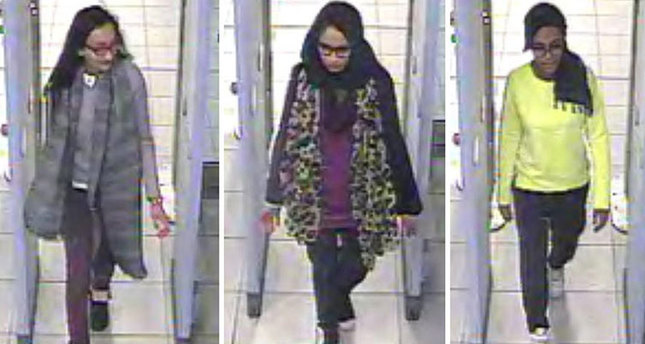 by Daily Sabah Mar 14, 2015 12:00 am
The Syrian national suspected of being a spy working for the Canadian intelligence agency, identified as Mohammed al-Rashed, who helped the three British girls cross into Syria through the Turkish border to join the Islamic State of Iraq and al-Sham (ISIS) also aided another eight Britons join the group, Turkish media reported on Friday.

According to Doğan News Agency's report, the suspect greeted 12 British people, including three teenage girls, at Ataturk International Airport in Istanbul and bought them bus tickets to Gaziantep, a Turkish province bordering Syria while allegedly handing the recruits to an ISIS commander.

On Friday, Foreign Minister Mevlüt Çavuşoğlu announced that the suspect has been caught in connection with smuggling the three British girls who left their London homes in early February, into Syria.

He went on to say that the person was working for the intelligence service of a country "that is a member of the international coalition" against ISIS, referring to U.S.-led forces carrying out air strikes against the armed group. He refrained from naming the country, other than stating that it is "not the United States, nor a European Union country." The coalition also includes several Arab countries as well as Australia and Canada.

A Haber, an Istanbul-based news network, released footage showing the man, identified as Mohammed al-Rashed, speaking to the girls in a Turkish town near the border before the trio board a vehicle to cross into Syria. The footage, captured by a hidden camera by Rashed, recorded in Gaziantep, shows Rashed welcoming the girls as they exit a taxicab. He tells them they will be in Syria "within an hour," as they carry their bags to another vehicle and adds that he will not go with them.

He was detained on February 28 in Şanlıurfa, another Turkish province on the border. Turkish newspaper Star reported that Rashed was arrested on March 4 by a court and confessed to smuggling the girls into Syria.

Star also reported Rashed entered and departed Turkey 33 times starting in 2013 through Istanbul and border crossings between Turkey and Syria. The article said photos of passports of 20 people, including the three British girls, were found on the hard drive of the computer in his possession, along with hidden camera footage showing potential ISIS recruits traveling to Syria.

A spokesperson for Canada's Ministry of Public Safety and Emergency Preparedness responded to the inquiry and said Canada was "aware" of the reports but "will not comment on operational matters of national security." The Canadian Embassy in Turkey had declined to comment on the matter on Thursday.