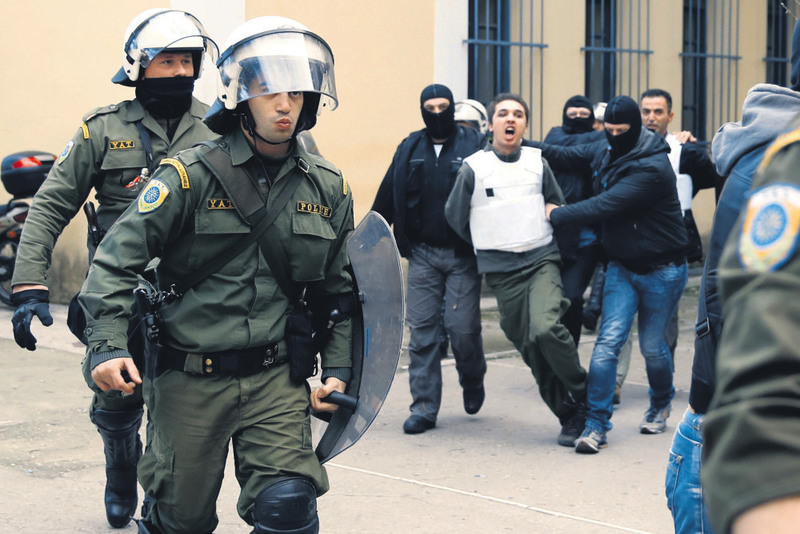 Police accompany DHKP-C members detained in a 2014 raid in Greece. Greek courts had ruled out the extradition of Hu00fcseyin Fevzi Tekin, a key figure of the terrorist organization detained in the raid, to Turkey.
by Daily Sabah with AA Apr 21, 2015 12:00 am

Figures supplied by the Turkish National Police show EU countries often refuse extradition requests by Turkey for terror suspects, exacerbating fears that terrorists find a safe haven in Europe while on the run from Turkish authorities

According to figures by the Turkish National Police, EU member countries approved extradition requests for only 56 terror suspects out of 657 wanted by Turkey. This number is extremely low compared to extradition requests fulfilled for people wanted for other charges. They also apparently serve as an indicator of how Europe is reluctant in terms of counter-terrorism cooperation, a grievance long held by critics of European countries who claim terrorists are deliberately provided with shelter.

European countries are more willing to extradite suspects involved in other crimes such as homicide and drug trafficking, as 85 percent of extradition requests have been accepted.

Blatant refusal of requests could be due to a loose definition of political asylum in European countries that allows alleged terrorists to exploit legal loopholes to take shelter in those countries citing political persecution in Turkey. Out of 657 extradition requests by Turkey, 227 were denied by European countries on the grounds that suspects were asylum seekers. But it still does not explain how members of the PKK, the Revolutionary People's Liberation Party-Front (DHKP-C) and other groups designated as terrorist organizations by the EU can find a safe harbor there. Moreover, by granting asylum to terror suspects, EU countries openly violate a binding U.N. resolution. Resolution 1373 orders U.N. member countries to take appropriate measures to ensure that asylum seekers had not planned, facilitated or participated in terrorist acts before they are granted refugee status.

Critics of the EU's counter-terrorism efforts claim EU countries even go as far as preventing extradition of terror suspects to Turkey, even when they were detained in a country outside the EU, citing that the suspect has refugee status in an EU country. A total of 118 extradition requests by Turkey were rejected on the grounds that the wanted suspects had EU citizenship in the country they resided in. Requests for extradition of some members the DHKP-C who were detained in Croatia, which was not a member of the EU at the time of their detention, and Moldova were reportedly blocked by EU countries.

Authorities in EU countries used to reject requests in the past on the grounds that Turkey had the death penalty. Turkey abolished capital punishment in 2004, and the heaviest sentence in force is an aggravated life sentence, though it is rarely handed down by Turkish courts, except for serious offences. Still, it provides an excuse, for instance, for Germany, to deny requests by Turkey. Germany has refused extradition of 27 terror suspects so far, citing the possibility of aggravated life sentence awaiting them in Turkey.

The DHKP-C is among the terrorist organizations whose members enjoyed a free life in European countries, particularly in Turkey's neighbor Greece. Greek courts denied the extraditions of 37 DHKP-C members to Turkey while they travel to Turkey to carry out terror attacks.
Last Update: Apr 21, 2015 11:48 pm
RELATED TOPICS