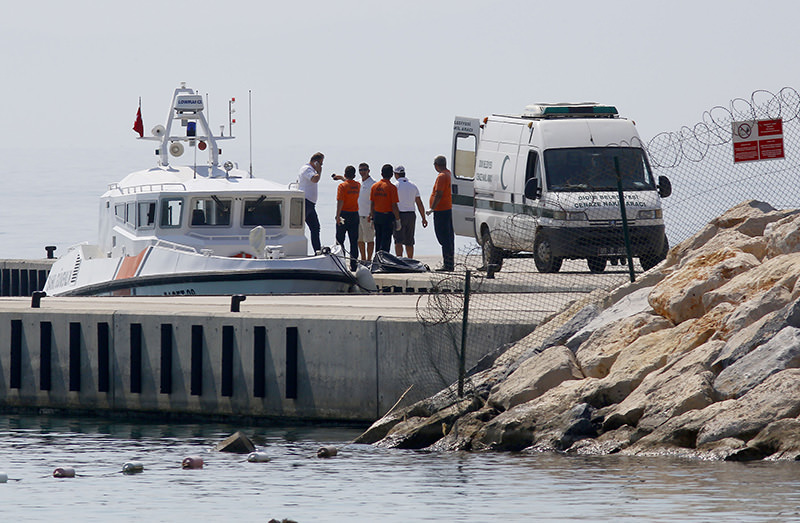 | AA Photo
by Daily Sabah Jul 08, 2015 12:00 am
A search is underway for at least 22 migrants who went missing when two boats carrying illegal migrants capsized near Didim, a town in the western province of Aydın on the Aegean coast. One body was discovered on Tuesday and two others were found on Wednesday morning as search and rescue crews from Turkey and Greece comb a vast area off the Turkish coast and near the Greek islands.

The nationalities of the migrants were not clear, but Turkish media reported most of them were Syrians who are captured almost on a daily basis off Turkey's Aegean coast trying to reach Greece. Turkey already has 1.8 million Syrian refugees and impoverished Syrians escaping the four-year-old conflict in their country increasingly turn to Europe in pursuit of a better life. According to Coast Guard figures, apart from Syrians, nationals from Afghanistan and Myanmar, two countries challenged by instability, are among the most intercepted migrants in Turkey.

Migrants were aboard a rubber boat and a larger boat, both crammed with the desperate crowd who gave all their savings to human smugglers. The cause of the sinking is linked to overcrowding in both boats.

Eighteen migrants were rescued by Turkish and Greek coast guard patrols after one of two boats sank and crews arriving at the scene found a rubber boat carrying nine that sank in the area, saving two people.

The Doğan News Agency reported a Syrian human smuggler was wanted in connection with the migrants who reportedly paid $2,500. It is not known whether the smuggler or his suspected accomplices were steering the boats or whether the migrants were on their own.
The boats were heading to Farmakosini island in Greece when they sank.

Another 60 migrants, all Syrians, were captured as they were attempting to set sail from Didim on Wednesday.

Turkish authorities intercepted more than 13,000 migrants on the Aegean Sea in the first six months of this year, already surpassing the total number of migrants captured last year.

More often than not, migrants perish in boat accidents, either when the boats capsize due to overloading or due to sailing in bad weather.

Despite the risky journey, migrants escaping conflict, persecution and economic instability in their countries risk their lives to reach any European country. Turkey, located between Asia and Europe, is their main gateway, as many migrants hail from Asian and Middle Eastern countries. With their proximity to the Turkish coast, the Greek islands in the Aegean Sea are a favorite destination of migrants. Over 60,000 refugees arrived on Greek islands from January to June 22 this year, according to Amnesty International.