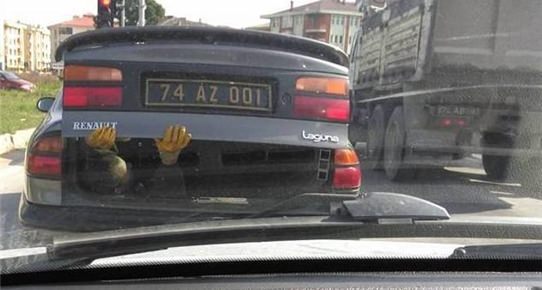 by daily sabah
Oct 21, 2015 12:00 am
A photo shared on social media on Tuesday has been brought to the attention of officials at the Municipality of Bartın, a province located at Turkey's northern region.

The photo showed a car belonging to the transportation services directorate, carrying a municipality worker. After the photo went viral on social media, it caught the attention of officials, as a result of which an investigation into the driver was launched.

The driver told the officials that the car's trunk was carrying iron bars and since the lid could not be closed properly, the worker "had to be put in the trunk" as well to help the bars stay in place.

The deputy mayor of the province, Hüseyin Taner Çetin, told the journalists that a certain amount from the driver's paycheck would be deducted within the scope of labor laws.
Last Update: Oct 21, 2015 11:48 am