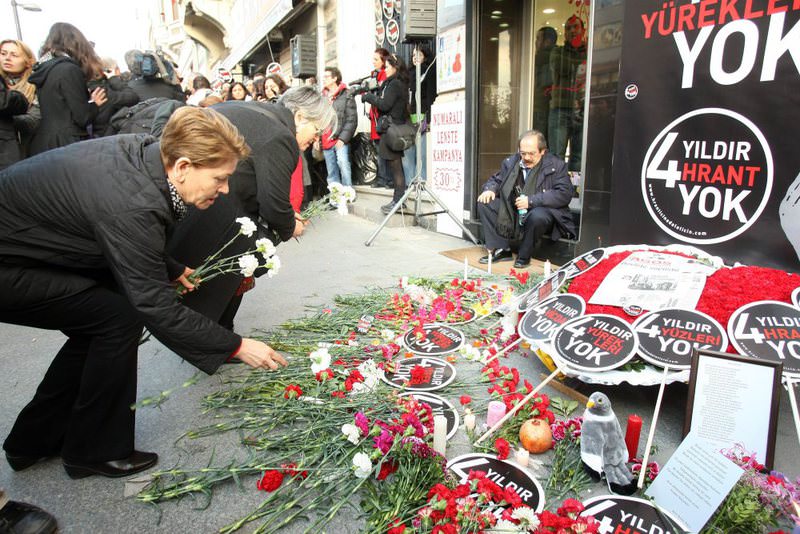 People leave flowers outside the offices of Agos newspaper where Hrant Dink was killed in 2007. Dink's family had long called for an investigation into the police's role in the murder.
by daily sabah Oct 27, 2015 12:00 am

Two police chiefs linked to the controversial Gülen Movement may face life sentences for their role in the murder of Armenian-Turkish journalist Hrant Dink, as a new indictment on police involvement in the murder case unfolds

Former police chiefs have been indicted by a prosecutor investigating the 2007 murder of Turkish-Armenian journalist Hrant Dink for their role in the plot to kill Dink, and face life sentences on charges of premeditated murder.

Ramazan Akyürek and Ali Fuat Yılmazer, affiliated with the shady Gülen Movement, are among 25 suspects including other top police officers accused of deliberately neglecting intelligence about the possible murder of Dink who was shot dead by a teenager in front of his Istanbul office. Akyürek was the chief of police in Trabzon - the hometown of Dink's assassin, Ogün Samast, who was convicted of murder - when Dink was assassinated, and later served as the head of the National Police's intelligence unit. Yılmazer was deputy director of the police's intelligence department, and allegedly thwarted an investigation into the police's role in the murder plot.

Akyürek, the former head of the Turkish National Police's intelligence unit, who is believed to have ties with the Gülen Movement, was arrested in February on the order of an Istanbul court one day after he was detained as part of an inquiry into Dink's murder.

Sabri Uzun, who was the head of the National Police's Intelligence Department, had claimed his subordinates hid tip-offs warning of Dink's murder. Questioned about the murder, Uzun said Yılmazer, his subordinate in the intelligence department, hid an intelligence report from him regarding the plot to kill Dink. Yılmazer was already imprisoned for nine months as part of another case involving alleged crimes committed by Gülenist infiltrators in the police, which was accused of illegal wiretapping activities. He was re-arrested earlier this month on charges of illegally wiretapping thousands of people in a new inquiry into alleged Gülenist infiltration of the police and judiciary.

The Gülen Movement has long been claimed to be behind the murder plot and was accused of trying to shift the blame for the murder to Ergenekon, an alleged gang of generals, journalists and several prominent figures imprisoned in a trial conducted by Gülenist prosecutors.

Followers of the movement - headed by the powerful, U.S.-based cleric, Fethullah Gülen - were found to have infiltrated key posts in the police and judiciary in an attempt to overthrow the government, according to several ongoing legal inquiries.

An indictment concerning the murder leaked to the press asks for prison terms of up to 25 years for several other senior police officers in Istanbul and Trabzon. Police officers in Trabzon are accused of not informing higher-ranking authorities about a plot to kill Dink in Istanbul. An earlier indictment had found key details in the plot, which were known by a police informant working for the Trabzon police, and was hidden from officers in Istanbul. Former police intelligence chiefs in Istanbul are also accused of not taking security measures to protect Dink despite intelligence reports, even though these reports were dubious, according to media outlets. Celalettin Cerrah, who was the head of the Turkish National Police's Istanbul department at the time of the murder, are among suspects indicted on charges of abuse of duty for not acting on intelligence reports.

The indictment is different than previous indictments on the case as both police chiefs linked to the Gülen Movement and those without any known ties to the movement are included.

Dink, then editor-in-chief of the Istanbul-based Agos newspaper, was shot dead by Samast on Jan. 19, 2007. Dink drew the ire of hardline Turkish nationalists in his lifetime, as he was one of the most outspoken voices calling for a debate to start on the controversial Armenian genocide issue. He received numerous death threats before his murder and faced several lawsuits for "denigrating Turkishness," an act punishable with prison terms, for his articles and editorials on the mass deaths of Armenians in 1915.

Muammer Akkaş, the first prosecutor assigned to the case, and his successors, all allegedly linked to the Gülen Movement, had not investigated the allegations that Akyürek deleted electronic and telephone logs at the National Police Department that could help shed light on the murder, according to media reports. Moreover, according to reports, security camera footage of the murder was not properly examined and the role of police intelligence officials and gendarmerie officers both in Istanbul and Trabzon, where the perpetrators allegedly planned the murder, were not investigated.
RELATED TOPICS