Ankara bomb was planned by ISIS in Syria, prosecutors say 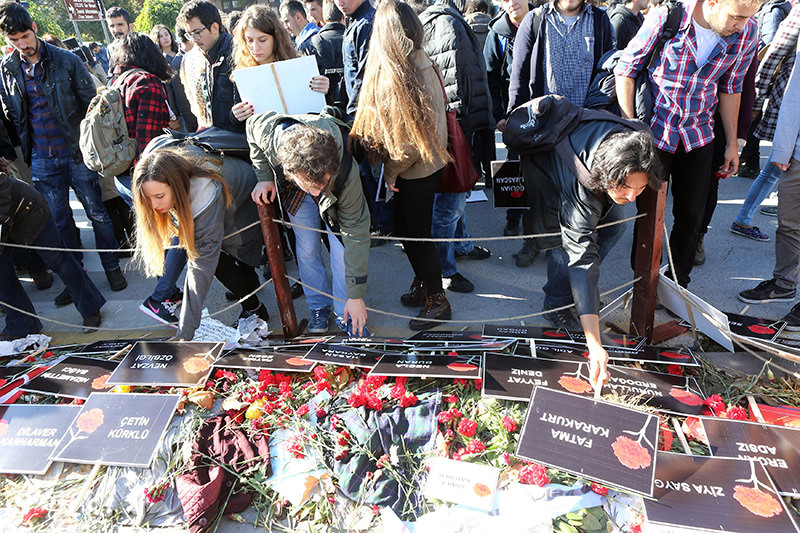 Members of youth organizations place posters with the names of victims of the double suicide bombing (AFP photo)
by daily sabah
Oct 28, 2015 12:00 am
Prosecutors on Wednesday said there was strong evidence that an Islamic State of Iraq and al-Sham (ISIS) cell in the southeastern city of Gaziantep orchestrated the twin suicide bombings in Ankara.

The number of suspects police are seeking in connection to the bombings has risen to 14, as the Ankara Court of Peace issued arrest warrants for four more suspects on Tuesday.

Later last week the court issued one more arrest warrant for another suspect, bringing the total number of those being sought to 10.

Police continue to work on identifying the second suicide bomber, who is believed to be a foreign ISIS militant, while the Ankara Public Prosecutor's Office confirmed on Oct. 20 in a statement that one of the suicide bombers was identified as an ISIS terrorist named Yunus Emre Alagöz, the brother of Şeyh Abdurrahman Alagöz, the suicide bomber who carried out the deadly Suruç bombing that killed 33 people and wounded more than 100 on July 20.

The office said that the suspect was identified by photographs, adding that hundreds of kilograms of explosives were found in five depots. In the depots, 10 suicide vests and 2.5 tons of ammonium nitrate were also found.

The prosecutors also implied that the bombers came from Syria, saying that they were from a "neighboring country in the south."

Experts involved in the investigation said the bombs used in Ankara show many similarities to the one used in Suruç. Deputy prime minister and Justice and Development Party (AK Party) spokesman, Numan Kurtulmuş, also confirmed that the way the attack was carried out and how the explosives were detonated resemble the Suruç bombing.

The suicide bombings in Ankara – the deadliest attack in modern Turkish history – were carried out by two suspected suicide attackers in a crowd of leftist, pro-Kurdish and union activists at a peace rally. The attack left 102 dead and hundreds more wounded.

Turkey has recently intensified its fight against ISIS, and as part of the new efforts, police have tightened security at transfer points such as airports, terminals, bus stations and rental car companies by employing a special risk analysis system and a team tasked with tracking suspicious foreigners who travel to Turkey for the first time and minors who have not made hotel reservations.

In May 2014 the counterterrorism unit of the Istanbul Police Department established "interview rooms" in airports and since has interrogated over 2,500 passengers suspected of having ties with terrorist organizations. Some 40 police teams, often dispatched to airports and bus terminals, have received special training in profiling, risk analysis, tracking and interrogation methods. It was reported that the police officers involved in these duties speak languages such as English, French, German and Arabic.

Twenty-three questions prepared by experts are asked in interrogations. More than 550 passengers confessed to having intentions to join ISIS and were then deported. An official reportedly said 20,000 people have been banned from crossing the Syrian border in an effort to prevent foreign fighters from entering Syria from Turkey. In late June the official number for those deported by Turkish authorities was 1,350.
Authorities have also urged citizens to cooperate with intelligence.

Late Friday, security and intelligence units said that four ISIS terrorists, one of whom was a German national, entered Turkey from the Syrian border to carry out attacks in the country.

According to security sources, the four ISIS-linked militants are planning either to hijack a plane or conduct a major terror attack at a rally. The sources added that three of the militants are linked to the ISIS-affiliated Turkish Dokumacılar (Weavers) group, whose two members carried out the Suruç and Ankara bombings.

The authorities said that the terrorists have fake Turkish ID cards in order to avoid arrest.

One of the suspects, Walentina Slobodjanjuk, is a German national and suspected of using a fake Turkish ID card under the name "Yıldız Bozkurt."