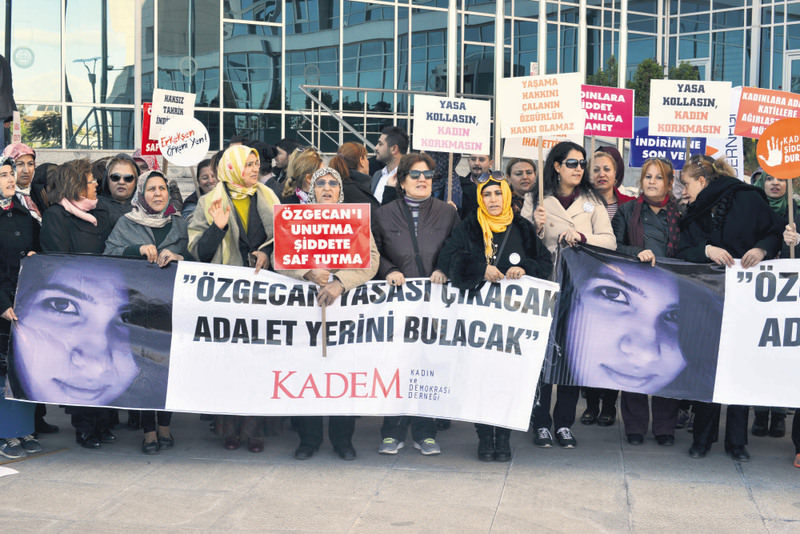 Activists from the Women and Democracy Association (KADEM) carrying banners and photos of u00d6zgecan Aslan outside the courthouse in Mersin on Thursday.
by Daily Sabah Dec 05, 2015 12:00 am

Women's rights activists expect an aggravated life sentence for the three convicts charged with killing, raping and mutilating a young female student in southern Turkey, and hope it will pave the way for similar rulings and act as a deterrence for violence targeting women in the country

A case that infuriated the public for its brutality came to a close on Thursday after a court handed down aggravated life sentences for three men for the rape, mutilation and murder of 20-year-old Özgecan Aslan. Aslan was only one of the victims of violence targeting innocent women in Turkey, which struggles to put an end to domestic violence-related murders. But the dramatic story instilled hope for many that the heaviest sentences will to be given to convicts in such cases who often got their sentences reduced due to controversial laws.

Women's rights activists believe the landmark ruling by a court in Aslan's hometown of Mersin will set the precedent for similar rulings in cases of infamous women's murders, mostly committed in espousal violence. They hope it will act as a major deterrent for would-be perpetrators.

Sare Aydın Yılmaz, head of the prominent women's nonprofit organization Women and Democracy Association (KADEM), which was among the activist groups monitoring the trial, told Sabah daily that judges have great power and they can use it in favor of victims.

The case caused public outrage throughout Turkey after the gruesome details of Aslan's murder in February were revealed, and protesters across the country have rallied for maximum sentence for the perpetrators.

A flexible interpretation of laws, which often works in favor of defendants, lead courts to hand down the softest sentences possible, even in serious crimes like Aslan's case. Yılmaz said courts' power is now at the service of victimized women, and convicts and would-be perpetrators are now aware that they would be sentenced with the heaviest prison terms if they commit such crimes. Yılmaz said they opposed the courts' reduction in sentences for defendant's "good appearance," "respectful attitude at hearings" and "good conduct," especially in cases involving murders of women. "You are already supposed to be respectful to the court but this is something judges see as 'a plus' on the defendant's part," she said, urging the authorities not to impose reductions.

Family and Social Policies Minister Sema Ramazanoğlu echoed Yılmaz's remarks on the ruling setting a precedent. "[The ruling] was something that relieved the public conscience," Ramazanoğlu told reporters on Friday. "Aggravated life sentence in such crimes is something our government wants to implement with Özgecan law," the minister stressed, highlighting a proposed bill named after the young woman. "This is probably the first instance of the application of laws in the strictest terms in such a case," she said. Ramazanoğlu said violence is a social phenomenon, and it was wrong to confine it to women only. "We need a social solution, and our ministry is working to achieve it. We are preparing a social risk map for adopting a special approach to the issue rather than a blanket approach. We have to determine what triggers violence, and this varies from city-to-city. We need tailor-made solutions for every different region or city," she said.

The aggravated life sentence is the maximum sentence in the legal system after the country abolished the death penalty in 2004. However, it is rarely applied except in extreme cases involving multiple homicides and other serious offenses. The legal system has long been under fire for the reduction of sentences, and there were widespread protests after the murder of Aslan in February, with some activists even calling for the reinstatement of the death penalty.

Reduced sentences by local courts is occasionally overturned by the Supreme Court of Appeals, the ultimate judicial authority, and sometimes commuted sentences in domestic violence cases are revoked due to legal complaints lodged by the Family and Social Policies Ministry. Yet, it does not stop judges bound by existing laws to implement reductions in several cases. For instance, a convict charged with the rape of a 70-year-old paralyzed and blind woman in the city of Diyarbakır got away with eight years in prison when the court ruled he was well-mannered during the hearings. A husband who ran over and killed the wife he divorced after stabbing her eight times had his sentence reduced to 18 years in prison from life as the murder was after the wife confessed she had conceived the couple's two children with another man. The justification was that the ex-wife "provoked" the man by confession. In one of the most outrageous trials in the recent memory, a man in Istanbul charged with murder of his girlfriend and her friend was sentenced to 50 years in prison for double homicide that normally carries a life sentence "for his good conduct and remorseful confession."
RELATED TOPICS