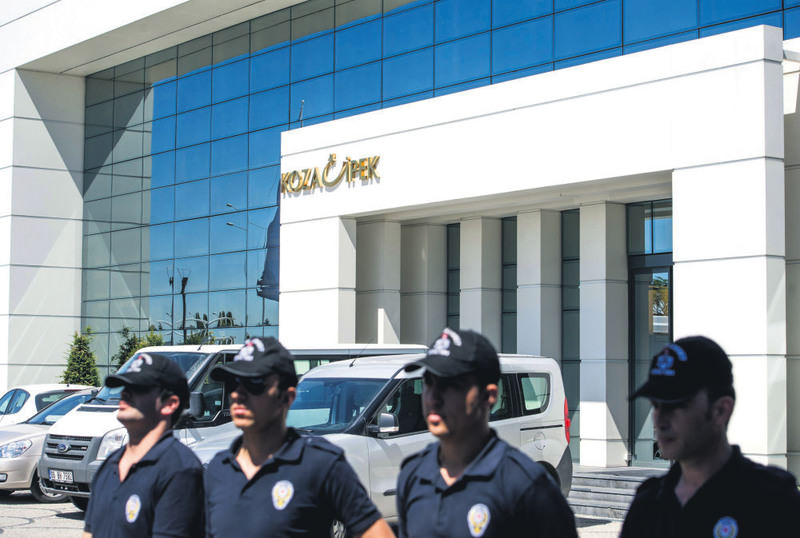 The Koza Holding companies were placed in trusteeship by a court order in September for illegal financial activities linked to FETu00d6.
by Hazal Ateş Dec 07, 2015 12:00 am

The Ankara Prosecutor's Office has uncovered evidence that points to Koza İpek Holding, which was placed in trusteeship due to having links to the Gülenist Terrorist Organization (FETÖ), being engaged in money laundering with close links to international criminal syndicates. FETÖ, led by U.S.-based imam Fethullah Gülen, is accused of trying to topple Turkey's elected government through its operatives in top state institutions. The FETÖ leadership is accused of laundering money collected by Gülen Movement members (called "himmet") through its links to certain private sector operatives. Koza Holding is seen as one of the principle intermediaries that were empowered by FETÖ to launder its money and transfer funds overseas.

The Ankara Court in October appointed trustees to companies belonging to the group. Experts' reports on the group's money transactions, fund transfers overseas and links to FETÖ have shown a deeper level of criminality, according to the prosecutor's office. The office, which already stated that Koza Holding acted in tandem with directives it received from FETÖ leadership, had accused the group of illegally channeling funds to terrorist group.

Officials, speaking on the condition of anonymity because of the continuing investigations, said Koza was part of an international criminal network to launder money with bogus gold production and is "just the tip of the iceberg." According to the report, Koza was channeling funds overseas, while also laundering money, amounting to billions of dollars, coming from abroad. One official said, "What we see is a group that has grown dramatically from a single printing press to a huge conglomerate based on gold production belonging to a single family with direct links to FETÖ."

The prosecutor's office is said to have requested information from its counterparts in several European countries and the U.S. Police investigations have shown that hundreds of computer hard disks were replaced in companies belonging to Koza to hide the illicit fund transfers. One official said: "They replaced the hard disks but did not replace the server linked to all these hard disks. The server has the records of all banking transactions, which will allow investigators to follow the evidence to foreign criminal groups." Once the comprehensive investigation of the server is complete, a report will be submitted to the prosecutor.

Police investigations have also shown that Koza Holding had certain documents showing that FETÖ was keeping records on people and groups it deemed as opponents. Documents seized from Koza Holding premises show that information was collected in all regions where the company was doing business. The group was especially interested in information about Peoples' Democratic Party (HDP) officials. Also in police raids, certain video recordings were found of local businessmen and HDP officials.

The prosecutor's office is also closely following the money collected by FETÖ, with those found to be involved investigated for aiding a terrorist group. The police are also keeping a close watch on money transactions to prevent its transfer abroad. The Gülen Movement's extensive network of educational, media and financial institutions are seen as the main channel through which FETÖ is feeding itself, and police investigations have hurt the network's ability to sustain the group, with many businessmen and groups trying to distance themselves from the shadowy organization.
RELATED TOPICS