Fethullah Gülen no-show at his first trial in Turkey 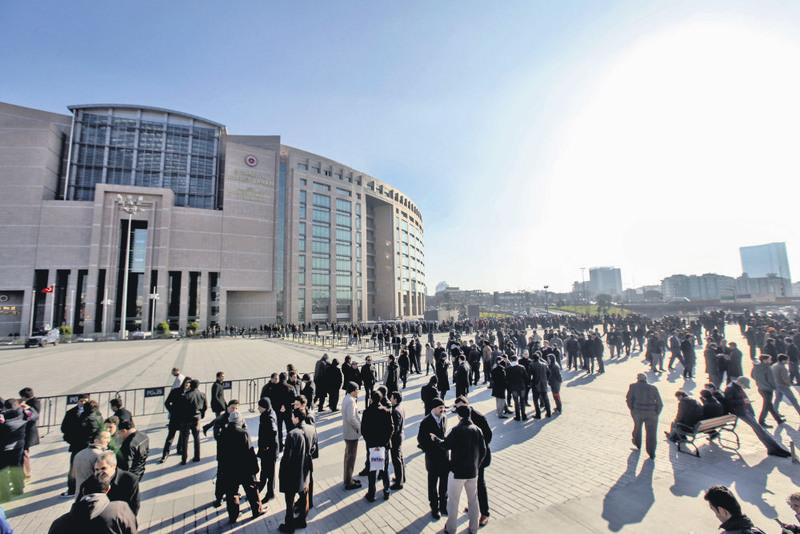 Supporters of Gu00fclenists gather outside the courthouse in Istanbul on the first day of the trial.
by Daily Sabah Dec 23, 2015 12:00 am

Retired U.S.-based fugitive imam Fethullah Gülen, who faces charges of terrorism in Turkey, unsurprisingly did not show up in court Tuesday for the first hearing of a trial in which he is accused of plotting to imprison his critics, despite his repeated claims of innocence

The first hearing in the trial for retired U.S.-based fugitive imam Fethullah Gülen, who is accused of imprisoning his critics through sham trials, began Tuesday in Istanbul. Gülen did not show up but four other suspects, including police chiefs linked to the Gülen Movement, attended the hearing. Gülen lives in a compound in Saylorsburg, Pennsylvania where a non-profit organization linked to his Movement is located. Gülen has lived in the U.S. since 1999 when he took up residence in the country in self-imposed exile. Turkey has already issued a "red notice" for his capture after the 74-year-old cleric was implicated in a string of criminal inquiries for attempting to overthrow the democratically elected government.

Tuesday's trial focused on the Tahşiye case, named after a small religious movement known for its firm opposition to Gülen's religious teachings. The leader of Tahşiye, Mehmet Doğan, and 122 others were detained in 2009 in what was later discovered to be a plot by police officers and prosecutors linked to the Gülen Movement. The defendants in the case were later acquitted and released after an investigation found they were detained on the basis of forged evidence used to portray them as a terrorist organization.

Karaca and the police chiefs, who were detained last year, attended the first hearing at Istanbul's 14th High Penal Court while the other defendants who were released pending trial were not present. Gülen was represented by his lawyer, Nurullah Albayrak, at the hearing.

Lawyers for defendants claimed the court is not authorized to hear the case and appealed for its transfer to the Constitutional Court, the highest legal authority, but the judges rejected the motion.

Gülen, already charged for being the leader of the Fethullahist Terrorist Organization (FETÖ) and "parallel structure," was not at the hearing as expected. Gülen openly declared war against the state in 2013 by conducting a criminal inquiry under the guise of an anti-graft probe which was carried out by Gülenist infiltrators of the police and the judiciary that resulted in the detention of several prominent figures. The probe caused outrage in Turkey and resulted in a massive purge of Gülenist infiltrators from law enforcement, the judiciary and bureaucracy.

As authorities continue to weed out Gülenists, the cleric has grown infuriated and repeatedly claims his innocence and condemns operations against his followers charged with terrorism.

Gülen is the "prime suspect" in the Tahşiye indictment, which asks that Gülen and Karaca serve prison time on terror charges that carry multiple life terms. They are also charged with forgery of official documents and defamation stemming from alleged planting false evidence to implicate Tahşiye members and using media propaganda against the Tahşiye group.

Gülenists were also implicated in another case yesterday. Authorities detained 14 suspects in eight cities acros western and eastern Turkey yesterday in operations against FETÖ and the "parallel structure." Twelve suspects; namely, police chiefs and officers who are accused of turning a blind eye to the criminal activities of Gülenists, according to media reports.

The Gülen Movement has evolved with clout from a small religious community into a widespread movement that extends beyond Turkey and has a network of businesses and schools all over the world. The movement is already entangled in a series of police operations and lawsuits for alleged fraud, illegal wiretapping, blackmail and plots to overthrow the government. Its high-ranking members have already fled overseas since police operations began last year. Most lawsuits are based in Istanbul, where Gülenist companies, various media outlets and nongovernmental organizations (NGOs) are based. The movement reportedly has a high number of infiltrators in law enforcement.

Istanbul will bring more Gülenists to trial in January and February, when Gülen will once again be listed as a defendant.

President Recep Tayyip Erdoğan denounced the FETÖ and "parallel structure" in a speech yesterday while the trial was underway. "They are now accountabe for what they did before justice. They were pawns of some circles that abandoned them after they saw how incompetent they were," he said. Erdoğan criticized the Gülenist campaign for trying to reclaim innocence and said: "They are involved in everything, from stealing questions and answers on exams to defrauding the people who donate to them," referring to an investigation into Gülenist connections to a cheating scandal involving a civil servant exam and an inquiry into the misuse of donation funds.

Erdoğan said that authorities have sped up the legal process against Gülenists and pointed to the recent legal action being taken against Gülenists in the U.S. "that disturbed them." A U.S.-based law firm had recently initiated a set of lawsuits against the Gülen Movement's activities in the U.S. where Gülen's charter schools are under investigation by the FBI on fraud allegations. Erdoğan said that Turkey is working to reveal the movement's international connections and is "closely monitoring the process of extradition for the gang leader in Pennsylvania," in reference to Gülen. "We hope the gang leaders and others will be brought to justice," he added.
RELATED TOPICS