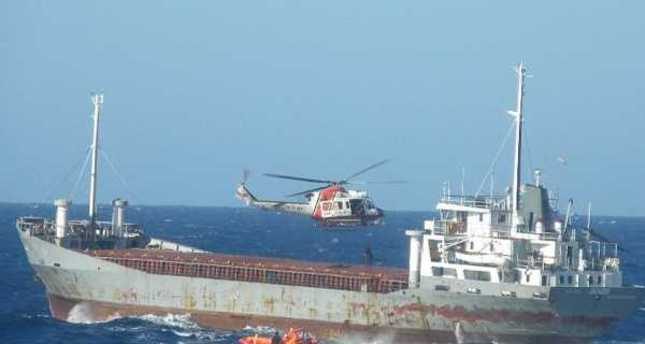 by Anadolu Agency Jan 10, 2016 12:00 am
Nine suspects who were arrested after a Jan. 6 seizure of a vessel carrying tons of illegal drugs have been remanded in custody on Sunday.

The suspects are accused of "drug production and trade," judicial sources in the Marmaris district of the Aegean province of Muğla said.

On Tuesday, security forces launched an anti-drug operation in international waters off the Libyan coast, seizing 13.6 tons of marijuana in powder form aboard the Joudi, a Bolivian-flagged cargo vessel.

This shipment was reportedly planned for European countries, police said.

The vessel docked Thursday in a Turkish port.

Four prosecutors took testimony from the nine arrested crewmembers, all of whom are Syrian nationals, police said.

The Coast Guard carried out the raid after getting special permission from the Foreign Ministry in cooperation with the Bolivian government.

The operation, code-named "Albatross," was carried out with the support of narcotics and special operations teams from the police.
Last Update: Jan 11, 2016 11:31 am
RELATED TOPICS