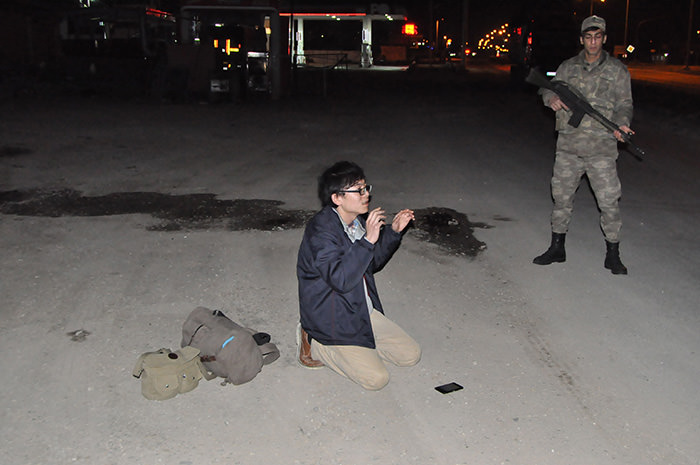 Security forces detained a Japanese citizen on suspicion of seeking to cross the border into Syria to join the Daesh terror organization, Turkish media outlets reported.

The 24-year-old man, whose name was given only as M.M., was detained late on Tuesday in the Nizip district of the southern city of Gaziantep, close to the Syrian border.

According to Doğan News Agency (DHA), he had admitted to wanting to travel to Syria after getting to know an unnamed contact by telephone and then agreeing to cross the frontier. He will be deported from Turkey back to Japan once the investigation is completed, DHA added. It said he was detained during a routine check by the gendarmerie while being driven toward the border settlement of Karkamış.

Anadolu Agency (AA) said police had confirmed his contacts with the group by examining messages on his cellphone. Images published by DHA showed the man kneeling in the middle of the road with his hands above his head, guarded by an armed soldier.

Officials from the Japanese Embassy in Ankara said they were "investigating" the reports on M.M.'s detention, and did not confirm whether the man was a Japanese national.

Turkish officials said security forces on Tuesday arrested 10 suspected Daesh members at the Syrian border in the Gaziantep region, including a would-be suicide bomber. Their nationalities were not disclosed.

During the raids conducted on three previously determined addresses by Istanbul Counter Terrorism and Intelligence Department units, in cooperation with German intelligence, two foreign and one Turkish national were arrested.

The alleged suspects were reportedly part of a possible terror attack plot against German schools and the German consulate in Istanbul.

Turkey is on high security alert after a Daesh suicide bomber blew himself up on Istanbul's most famous shopping street, İstiklal Avenue, on Saturday. Due to its proximity to Syria and Iraq where the terrorist group is active, Turkey is exposed to threats from Daesh, which classifies the country among its many enemies. The group's clashes with rebels occasionally spill over into Turkish territories, while Turkey struggles to keep its lengthy border with war-torn Syria well-protected with walls and firepower.

Turkey has listed Daesh as a terrorist organization since 2013. So far, more than 3,300 suspects have been investigated for links to Daesh and other extremist groups.

Turkey is also at risk from a flow of foreign recruits to the group in Syria. The latest figures show some 27,000 people from more than 100 countries were stopped as they attempted to travel to Syria to join the militants. Though Daesh recruits militants from all across the globe including East Asian countries, no figures are available indicating whether or not Daesh recruited any from Japan. In 2015, the terrorist organization killed two Japanese hostages, a freelance journalist and a contractor, after the duo was captured by Daesh in Syria.