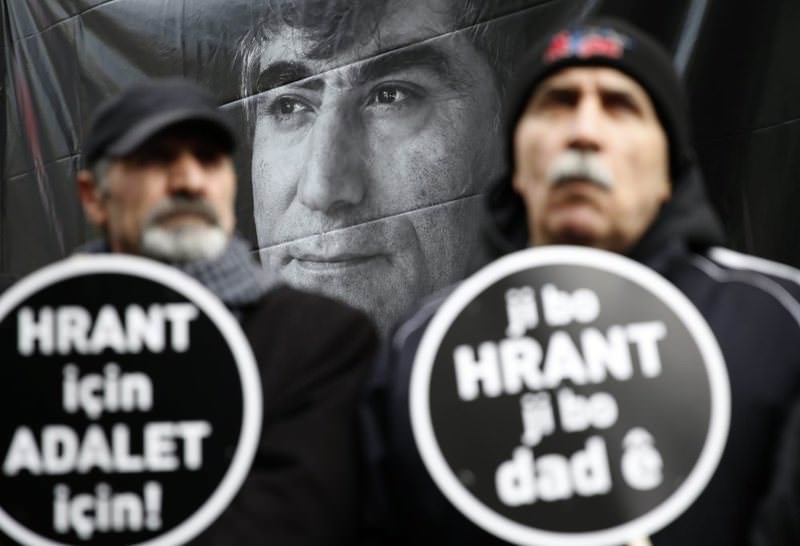 Following a court's approval to merge two cases, former police chiefs linked to the controversial Gülen Movement will stand side-by-side with the murder convicts of Armenian-Turkish journalist Hrant Dink for the first time. The police chiefs are accused of negligence and orchestrating a cover-up before and after the 2007 murder, which sparked public outrage.

Dink, the late editor-in-chief of Agos daily, was shot dead in front of his office in Istanbul by Ogün Samast, a 17-year-old teenager who claimed he shot Dink for his anti-Turkish views. The murder, initially considered to be committed by far-right nationalists, later turned out to be a larger plot, and several police intelligence officers were arrested for deliberately covering up intelligence on the murder plot. Moreover, several police chiefs indicted in the case are accused of links to the Gülen Movement, the umbrella term used to describe the Gülenist Terror Organization (FETÖ), which is behind two alleged coup attempts in 2013, according to prosecutors.

The suspects will appear before an Istanbul court tomorrow in the case mired with allegations of corruption after former prosecutors looking into the case claimed to cover the tracks of the Gülen-linked officers' role in the murder. The hearings will continue for three days.

The Gülen Movement is accused of trying to shift blame for the murder onto others, including the Ergenekon, an alleged gang of generals, journalists and several prominent figures who were imprisoned after a trial conducted by Gülenist prosecutors. All defendants in the Ergenekon case were released years later, after investigations revealed they were imprisoned by prosecutors and judges close to the movement based on forged and tampered evidence.

The court had earlier accepted the indictment of 26 suspects in the Dink case. Suspects include former Intelligence Department directors of the Turkish National Police, Engin Dinç and Ramazan Akyürek, former intelligence director of the Istanbul Police, Ali Fuat Yılmazer, and intelligence officers Muhittin Zenit, Ercan Demir and Özkan Mumcu. Akyürek, who was police chief in Trabzon - the hometown of Samast and his alleged accomplice, Yasin Hayal - faces aggravated life sentence. He is charged with running a terrorist organization, homicide, forgery of official documents, destroying official documents and abuse of duty. Yılmazer faces life in prison for similar charges while other officers are subject to lesser sentences for negligence and causing manslaughter by negligence as well as hiding evidence. Akyürek was arrested in February 2015 upon orders from an Istanbul court, just one day after he was detained for questioning regarding the Dink murder, while Yılmazer was arrested earlier in a separate case involving the Gülenists.

The Supreme Court of Appeals ordered the merger of two separate cases in January, marking a legal victory for Dink's family who sought to shed light on the officials' role in the murder. The murder took place after Dink was warned by Istanbul authorities over his work. A local official testified to the court after the murder and countered allegations that Dink was threatened with death after running a story claiming a prominent Turkish figure was in fact an Armenian woman. The official said Dink was warned against "stirring public outrage."

Dink, an outspoken critic of both the Turkish and Armenian stance toward the mass deaths of Armenians in 1915 - labeled as "genocide" by Armenia, a term rejected by Turkey - drew ire among hardline nationalists during his lifetime. His call for the resolution of the controversial issue led to numerous death threats before his murder. He also faced several lawsuits for "denigrating Turkishness," an act constitutionally punishable with prison time, for his articles and editorials regarding the issue.

The Gülen Movement, led by U.S.-based retired preacher Fethullah Gülen, is accused of having infiltrated Turkey's police departments and judiciaries as well as the higher echelons of the bureaucracy. Gülenists currently face a number of trials as the judiciary, which saw a purge of prosecutors and judges linked to the movement, stepped up efforts against FETÖ. A large number of the group's members were arrested or wanted in multiple cases ranging from illegal wiretapping to conspiring to imprison critics of the movement, money laundering and defrauding the state. Gülen is the prime suspect in all cases as head of the FETÖ and rejects returning to Turkey from Pennsylvania where he resides while Turkey seeks to speed up his extradition process.
RELATED TOPICS