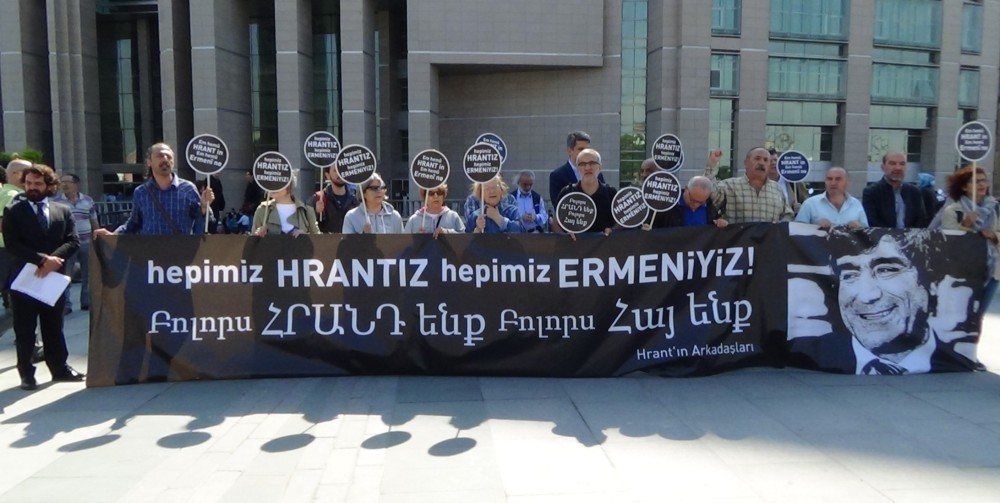 Activists hold a banner with a photo of Hrant Dink and a slogan: ,We are all Hrant,, outside the courthouse in Istanbul.
by Daily Sabah May 25, 2016 12:00 am

The trial of former police chiefs linked to Gülenists who stand accused of negligence and staging a cover-up in the case of murdered Turkish-Armenian journalist Hrant Dink resumed yesterday, with activists asking the court to convict anyone who turned a blind eye to the case

The second hearing in a resumed trial in the murder of Hrant Dink, a prominent Turkish-Armenian journalist, was held Tuesday in Istanbul. Though it has been nine years since Dink, the editor-in-chief of Agos daily was shot dead outside of his office, the courthouse was full of activists renewing their calls for justice in the case which has been marred with allegations of a cover-up and gross negligence, being blamed on the shady Gülen Movement.

Several former police chiefs who were arrested on charges of staging a cover-up and gross negligence were among those who appeared before the court while former Istanbul police chief Celalettin Cerrah sought exemption from the trial, claiming that the court was not authorized to hold him responsible for the charges since another court previously barred him from prosecution.

No verdict is expected in the second hearing of the trial after the cases of Ogün Samast -- the 17-year-old teenager who shot Dink -- and police officers linked to Gülenists were merged earlier this year in a promising step in the trial.

Ramazan Akyürek and Ali Fuat Yılmazer, two former police intelligence chiefs associated with the Gülen Movement were among the 34 defendants in the courthouse.

The suspects are accused of failing to stop the murder plot in a case which has already dragged on for years, with Ogün Samast and two others accused of having roles in the plot to kill Dink already imprisoned. There have been claims that the investigation was deliberately prolonged by two previous prosecutors linked to the Gülen Movement. They are wanted for separate crimes linked to the movement, which is structured based on its subsidiary FETÖ, designated "a national threat" by the government. Both men remain at large.

Yılmazer and Akyürek were detained last year as well as this year. Yılmazer has been arrested and is currently a suspect in a separate investigation into crimes committed by the Gülen Movement.

The Gülen Movement is accused of trying to shift blame for the murder onto others, including Ergenekon, an alleged gang of generals, journalists and several other prominent figures who were imprisoned after a trial conducted by Gülenist prosecutors. All the defendants in the Ergenekon case were released years later after investigations revealed that they were imprisoned by prosecutors and judges close to the movement based on forged and false evidence.

Dink, an outspoken critic of the Turkish and Armenian stance on the staggering number of Armenian deaths in 1915 - labeled as genocide by Armenia, a term rejected by Turkey - drew the ire of hardline nationalists during his lifetime. Dink's outspoken request for a resolution to the controversial issue resulted in numerous death threats prior to his murder. Dink was also facing several lawsuits for "denigrating Turkishness," an act constitutionally punishable with prison time, for articles and editorials he wrote on the issue.

Defendants including Ramazan Akyürek face manslaughter charges for deliberately hiding evidence regarding the shooter along with charges of forgery and abuse of duty in relation to the cover-up. of Another defendant accused of plotting the murder with Ogün Samast has turned out to be an informant for the police, while Gülenist police chiefs are accused of hiding tip-offs they received from their superiors regarding the murder.

A group of activists who call themselves "Friends of Hrant" have staged protests since the trial began, following the capture of Ogün Samast shortly after Dink's murder. The activists have repeatedly called on the state to find the "real culprits" in the case, pointing to police officers and other officials involved in an alleged cover-up. In a statement outside the courthouse ahead of yesterday's trial, the group said that "masterminds of the murder and those simply ignoring the murder plot should be held accountable regardless of what faction they are members of," referring to alleged Gülenist involvement in the plot. Activists praised the merging of the original case with the cases of negligence, saying, . "We want killers of Hrant Dink, those who incited them to carry out the murder and those who turned a blind eye to this plot to be held accountable and punished. We will continue our call for justice as long as all accomplices in this murder are revealed, no matter who they are," the activists said in a joint statement.

The trial may take a new turn soon, according to a news report. A Turkish daily recently published security camera footage of what they believe to be six gendarmerie intelligence officers recorded at the murder scene before and after Dink was killed. It was long claimed that gendarmerie intelligence, a powerful military intelligence agency, was tracking Samast, and Historical Traffic Search (HTS) records monitoring phone call records has revealed that six gendarmerie intelligence officers were in Şişli, the district where Dink was murdered, on the day of the crime. However, security camera footage on the busy street where Dink was killed was either deleted or shops' security cameras in the area malfunctioned at the time, adding to the mystery and raising suspicions of a cover-up. The Akşam newspaper reported on May 3 that all cameras in the area were examined again by the prosecutor's office and six officers were detected in separate footage that was recovered. The newspaper reported that some officers seen in the footage retired after the murder while others are still on duty.
RELATED TOPICS