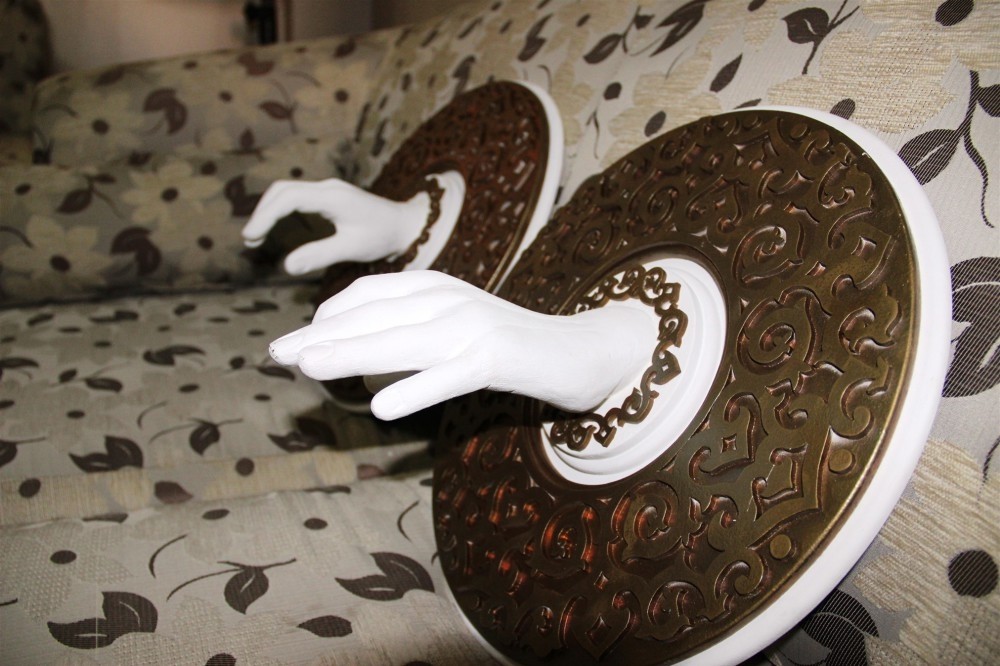 Hand sculptures were discovered at a Gu00fclenist-run school in u0130zmir.
by Daily Sabah Aug 11, 2016 12:00 am
A police investigation revealed a bizarre tradition of the Gülenist Terror Group (FETÖ), led by U.S.-based former cleric Fethullah Gülen. Two hands made of plaster were in a Gülenist-run school in western Turkey were "modeled after Gülen's hands and kissed by cult members in order to show their commitment to Gülen," Turkish media outlets have reported.

The sculptures were found during a search at Yamanlar College, a private school run by Gülenists in the city of İzmir. The school was shut down and seized by the state after the July 15 coup attempt that is alleged to have been perpetrated by FETÖ members. It was claimed the school in İzmir where Gülen worked as a preacher in the 1960s and garnered a significant following was a recruitment ground for "chosen" members of FETÖ placed in military schools. Gülenists are accused of cheating in military school exams thanks to high-ranking military officers linked to the cult helping would-be cadets.

Cult members, before cutting off any visible connections to Gülenists, kissed the hands and put their forehands on them as a traditional Turkish sign of respect, in order to pledge lifetime allegiance to Fethullah Gülen.

Gülen is viewed as a type of messiah by his followers according to former members of the organization, which is at the center of an investigation into a string of crimes, from the coup attempt to illegal wiretapping. According to Hüseyin Gülerce, a former member who spoke to Daily Sabah, Gülen is "like a prophet" to followers. Other insiders who spoke to Turkish media say the former cleric enjoys a sacred status and any criticism of his remarks by followers result in ostracism. Gülen claims to communicate with Prophet Muhammad in his dreams and is instructed by him in actions deemed illegal by authorities but viewed as part of a divine mission by Gülenists.

Along with hand sculptures, police found a mysterious tunnel at the school. The fact that the 200-meter tunnel is linked to a mosque is even more suspicious and police are now investigating why a school would need such a tunnel.

The hidden tunnel was discovered after an alumnus helping the investigation notified police about its existence. The mosque in question was in fact used as a library by the school administration even though the college had originally received a permit for the construction of a mosque.

The entrance to the tunnel was found to be located in the basement of the high school, which contained heating boilers.

The tunnel led to the ground floor of the mosque and the hatchway was covered with a red carpet in an attempt to hide its location.

The 2-meter-high and 1-meter-wide tunnel contained heating pipes and lighting, along with two doors for exit and entry.

The fifth and sixth floors of the school building contained secret meeting rooms, a kitchen and numbered rooms. These facilities could only be reached via special elevators that only stopped on those floors. The doors of the elevator were concealed by tall mirrors on other floors, police said.