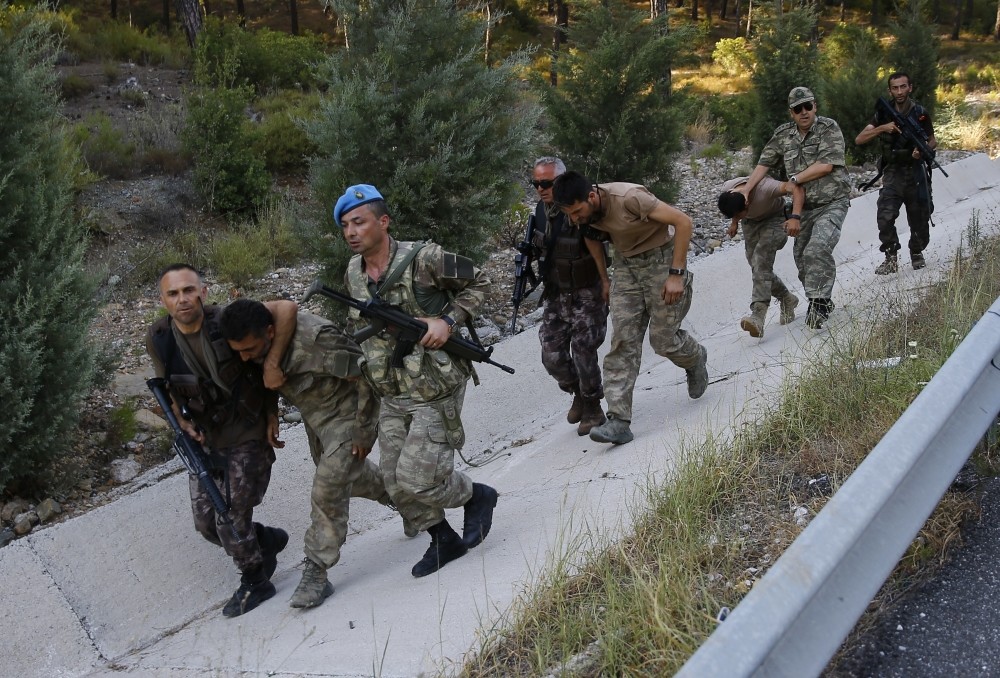 Soldiers and members of police's special forces unit accompany officers linked to the Gu00fclenist junta after their capture near the southwestern town of Marmaris last month.
by Daily Sabah Aug 13, 2016 12:00 am

Testifying after the foiled Gülenist coup attempt, officers involved in the putsch related details of the coup attempt and how they plotted to kill President Erdoğan

Testimony from three officers involved in the July 15coup attempt, which Ankara attributes to a military junta loyal to the Gülenist Terror Group (FETÖ), shed light on how they plotted to assassinate President Recep Tayyip Erdoğan and their intimate connections with Gülenist.

Erkan Kıvrak, a former aide to Erdoğan, admitted that he relayed information on the whereabouts of the president to another aide, Col. Ali Yazıcı. Yazıcı was among those detained for involvement in the coup attempt. Erdoğan was on vacation in southwestern Turkey with his family while the Gülenist junta attempted to seize power on July 15. According to Kıvrak's testimony published in the Habertürk daily, he told police that he learned the location of the hotel where Erdoğan was staying one day before the coup attempt and informed Yazıcı, who had asked him repeatedly for the information. Kıvrak was detained in Antalya, a city near Muğla where Erdoğan was vacationing, shortly after the coup attempt.

He initially denied membership in FETÖ, but failed to explain why he did not contact the president's entourage, despite being close to Erdoğan at all times. He pointed to Yazıcı's role in the coup attempt, and said it was "suspicious" that Yazıcı had visited a military base in western Turkey that housed the helicopters that fired on the hotel Erdoğan was staying in during the coup attempt.

Maj. Şükrü Seymen was the leader of a team of 11 soldiers who attacked the hotel where Erdoğan was staying. Erdoğan left the hotel about 15 minutes before the attack, and several police officers stationed at the hotel were killed by coup troops. Seymen and others managed to flee after their attempt to kill Erdoğan was repelled and hid in the countryside for two weeks before they were captured after a massive manhunt in the area around Muğla. In leaked testimony, Seymen blamed Brig. Gen. Gökhan Şahin Sönmezateş, a high-ranking coup plotter who was arrested after the putsch attempt. Seymen said he was carrying out Sönmezateş orders, who told them their mission at the hotel in Muğla was to retrieve the leader of a terrorist organization.

Avşar Zırh was a noncommissioned officer and a member of an elite marines unit. He was member of a team of soldiers assigned by the coup plotters to capture Adm. Bülent Bostanoğlu, the commander of Turkish Naval Forces, but their mission was aborted when Bostanoğlu succeeded in evading capture during the night of the coup attempt. Zırh was released following initial detention after the coup attempt, but according to testimony published in the Vatan daily, he turned himself in 10 days later "because of his guilty conscience." Zırh confessed membership in the FETÖ, saying how he was recruited by Gülenists before he was admitted to a military school. He said an elder brother, the name given to senior members who instruct low-ranking members like Zırh, called him one day before the putsch and asked for a meeting. Zırh met the him and a man he did not know in a house. "This person told me good things would happen tomorrow. Next evening, I met four other [Gülenist] officers at Serg. Cafer Saraç's house. Saraç made a few phone calls and said we were assigned to a mission to arrest the commander of the Navy, but the mission was aborted because the [coup plotters] failed to locate him."
RELATED TOPICS