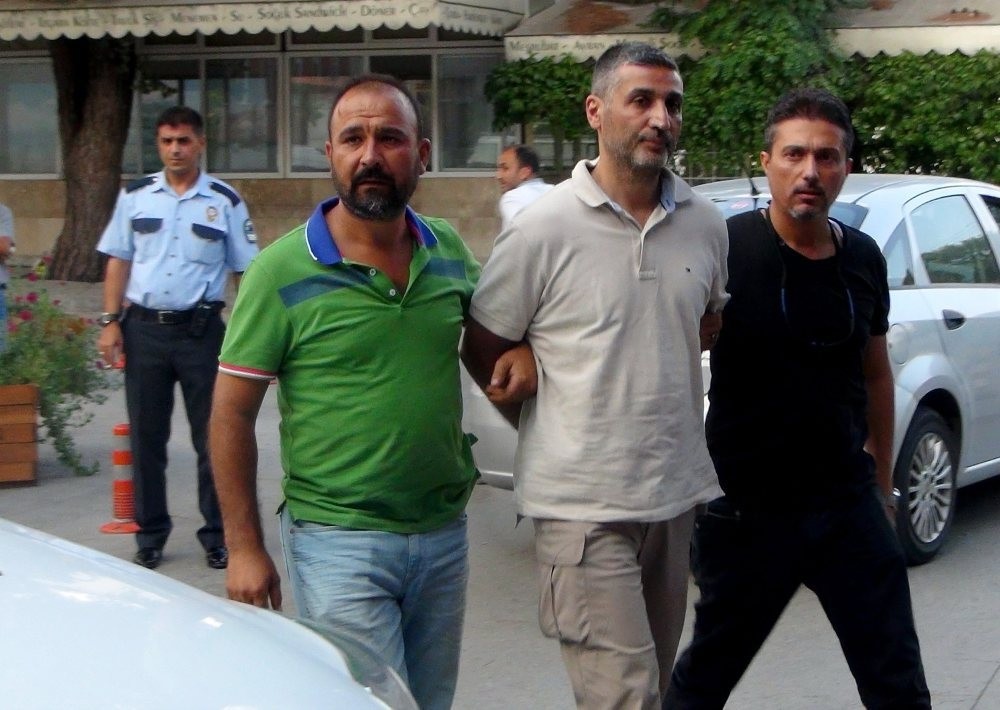 Police officers accompany Gu00f6khan Su00f6nmezateu015f to a courthouse in the southwestern city of Muu011fla where he was transferred after his capture in Ankara.
by Yüksel Temel Aug 17, 2016 12:00 am

Notes found in the possession of a general involved in the July 15 Gülenist junta coup attempt revealed how FETÖ planned their next steps if the coup succeeded, and the people they planned to install in key positions

Handwritten notes found in the office of Gökhan Sönmezateş, a general linked to the Gülenist Terror Group (FETÖ) arrested after the July 15 coup attempt, disclosed coup plotters' contacts and how they planned for people in the cult to work after the putsch attempt.

Sönmezateş was the mastermind of an assassination attempt targeting President Recep Tayyip Erdoğan, who was staying in a vacation resort in southwestern Turkey during the coup attempt. Erdoğan escaped the assassination attempt by a team of elite soldiers linked to FETÖ. Sönmezateş, who commandeered the raid on Erdoğan's hotel on the night of the coup attempt, was captured in Ankara three days after the attempt.

A police search of Sönmezateş's office at the military base he worked at exposed FETÖ's scheme on how to act if the coup succeeds. Sönmezateş denied links to FETÖ after his arrest.

One of the notes contains the names of 22 generals who were arrested during the coup attempt and which duties they would be assigned to if the coup succeeded, from key posts in the bureaucracy to positions in the Turkish Armed Forces. Dozens of other names set for key positions were also found among Sönmezateş' notes.

Notes show Sönmezateş classified military officers as well as civilians in line with their support for FETÖ. Some names in the notes are marked as "sympathizers" while others are classified as"reliable." Şerif Ali Tekalan, an "imam" for the terror cult who remains at large, is also included in the notes with an annotation reading "he extended greetings."

The general chaired a meeting with a group of generals involved in the coup attempt the day before the attempt at a military school in Istanbul, apparently to discuss how to act during the putsch, according to the Turkish media.

Turkey was rocked by the coup attempt, the third major attempt by the military to seize power in its history, on July 15. Coup plotters linked to FETÖ tried to overthrow the government and assassinate Erdoğan. Troops loyal to the state along with police units and thousands of unarmed civilians who simply stood in front of tanks and tried to convince soldiers to lay down their arms succeeded in quelling the coup attempt. In the process, more than 230 people, the majority of them civilians, were killed and more than 1,440 people were injured. At least 2,800 officers linked to the coup were detained or arrested after July 15, while Gülenists in all state institutions have been dismissed. Massive purges are still underway to weed out suspected sympathizers of Gülen within the bureaucracy, military, police, judiciary and politics.

FETÖ, which openly declared a war against the government in 2013 with two coup attempts by its infiltrators within the police and judiciary, has been under the spotlight since then. In a string of lawsuits, they are also accused of illegally wiretapping thousands of people and imprisoning their critics in sham trials thanks to their members in the judiciary and police. Victims of the Gülenist plots who were acquitted in trials after the cult was designated as a terror group have stated that they were blacklisted by Gülenists in state institutions and faced false allegations and eventual imprisonment when they opposed Gülenist influence in those institutions.

Gülenists have been infiltrating the army since the 1980s, according to former members of the cult. Military schools have been under the influence of the terror cult and those opposing their presence were dismissed from the schools, while sympathizers of Fethullah Gülen were granted admission to schools, according to media reports.
RELATED TOPICS