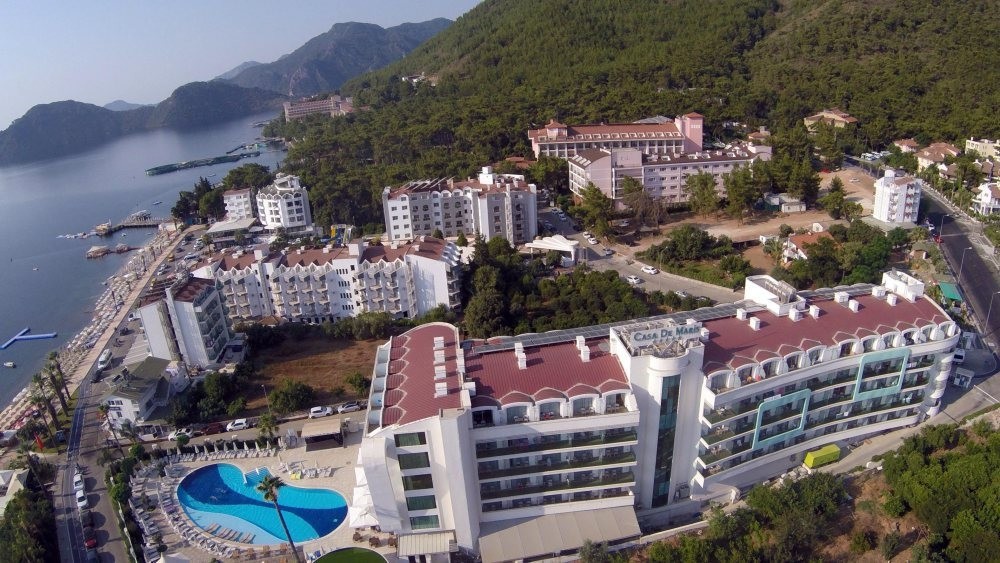 Aerial view of the hotel where Erdou011fan was staying when the coup attempt unfolded. Coup troops attacked the hotel to kill Erdou011fan. (Photo by Kenan Gu00fcrbu00fcz)
by Abdurrahman Şimşek Aug 18, 2016 12:00 am

Prosecutors have revealed how two days before the July 15 putsch attempt, coup plotters from the Gülenist Terror Group (FETÖ), intent on killing or capturing President Recep Tayyip Erdoğan, used F-16 fighter jets to pinpoint his location and inform troops who would be sent for the mission.

Erdoğan was together with his family at a hotel in the resort town of Marmaris in southwestern Turkey when the putsch attempt by the Gülenist junta unfolded. The president managed to dodge a team of elite assassins sent by the coup plotters to capture or kill him, and later mobilized the public to stand against the coup attempt.

Investigators in Ankara, where the coup plotters attacked the parliament, army headquarters and commanded the attempted coup from a military base, have revealed the reconnaissance mission. The prosecutor's office in Ankara have asked prosecutors in Muğla, where Marmaris is located, to arrest the Turkish Air Force (THK) personnel who were involved in the mission. According to the letter sent to the Muğla prosecutors, fighter jets took off from bases in the southeastern city of Diyarbakır and from Ankara and flew over the hotel on July 12 and 13. They took photos of the hotel, and passed these on to the coup-supporting troops dispatched to the hotel on the night of the attempted coup.

The reconnaissance mission was uncovered due to testimony from officers involved in the coup attempt, who were arrested after it was foiled. The coup-supporting pilots, besides the reconnaissance of Erdoğan's hotel, also flew took photos of Okluk Cove in Marmaris, where a guesthouse allocated for the president is located, on the assumption that Erdoğan might head there after leaving the hotel.

Upon hearing a coup attempt was underway, Erdoğan boarded a helicopter and was flown to an airport in nearby Antalya with a plan to board the presidential plane, but decided to wait a while before landing. Fifteen minutes before the helicopter landed in Dalaman, coup-supporting officers stormed the presidential plane hoping to find the president, and left the airport when they found it empty. After the coup-supporting officers left, Erdoğan boarded the plane and flew to Istanbul, where he was welcomed by a huge crowd. Over the following hours, public resistance, together with intervention by police and those soldiers who were not involved in the coup attempt managed to quell the attempted coup.

Yakup Özcan, a non-commissioned officer at an air base in the western city of İzmir where the attack on Erdoğan's hotel was planned, testified how the assault on the hotel was planned by Brigadier General Gökhan Sönmezateş. "Before the operation, we met with Sönmezateş and some officers from the Special Forces. The Special Forces officers had photos of the hotel and the beach. They told us the target was in the hotel and to shoot anyone resisting the raid." Gökhan Sönmezateş, one of thousands of officers arrested for the coup attempt, earlier told prosecutors the plan to capture or kill Erdoğan was ordered by General Semih Terzi, who was shot dead by an anti-coup officer on the night of the putsch attempt.

The team of assassins was captured hiding near Marmaris, following the quashing of the coup attempt. Captain Burkay Karatepe remains at large.

The coup attempt on July 15 was the third major attempt by the military to seize power in the history of the Turkish Republic. The coup plotters, which Ankara has linked to FETÖ, tried to overthrow the government and assassinate Erdoğan. Troops loyal to the state, along with loyal police units and thousands of unarmed civilians who simply stood in front of tanks and tried to convince soldiers to lay down their arms, ultimately succeeded in quelling the coup attempt. Sadly the coup attempt killed more than 230 people, the majority civilians, and more than 1,440 people were injured. At least 2,800 officers linked to the coup have been detained or arrested, while Gülenists have been dismissed from all state institutions. Massive purges remain underway to find Gülenist sympathizers within the bureaucracy, military, police, judiciary and political parties.
RELATED TOPICS