Gülenist-linked engineers wanted for their role in attempted coup 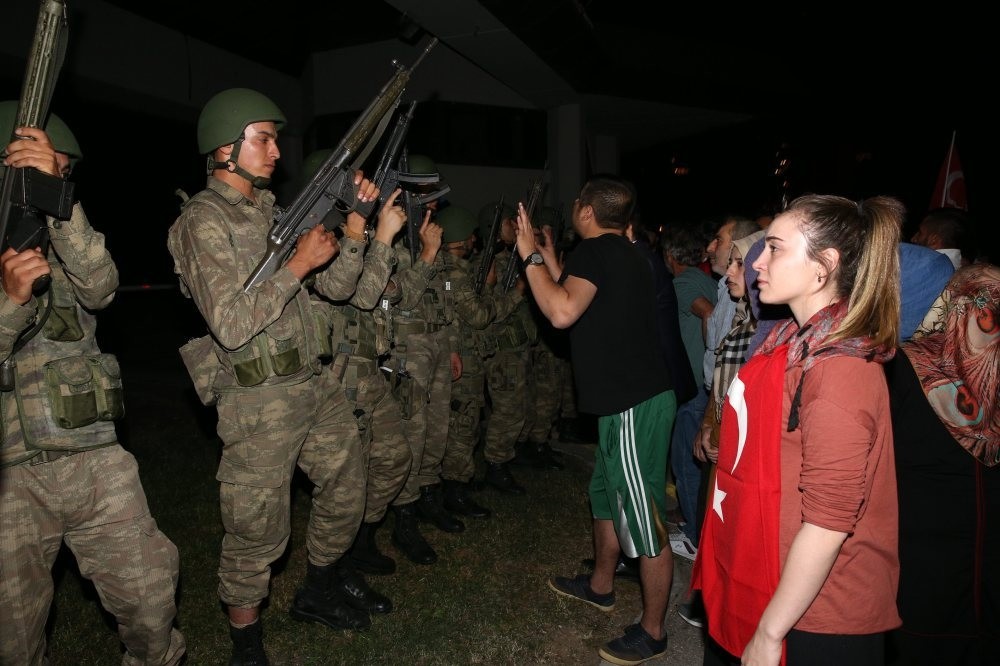 Police are searching for four Gülenist-linked engineers who assisted the troops that plotted the coup attempt on July 15, as new findings indicate they were brought in to cut state-run television-radio TRT's broadcasts in Ankara

Criminal investigations revealed two engineers from a state-run defense company provided technical expertise to the coup plotters on July 15 to take over the headquarters of the public broadcaster TRT in Ankara. They and two other engineers from a private company, all four believed to be operatives working for Gülenist Terror Group (FETÖ), are wanted on charges of supporting the coup. Reports indicate that the fugitive technicians are hiding in Turkey as well as in the United States.

The four suspects were brought in by the plotters of the coup, which Ankara believes was masterminded by the Gülenist Terror Group (FETÖ), and include three men who helped the pro-coup troops to seize control of the TRT's Istanbul headquarters.

A report in the Yeni Şafak daily says coup-supporting troops, led by Tanju Poshor, a former commander of the Presidential Guard, was helped by Onur Demircan, an engineer in state-run defense company HAVELSAN, another unidentified HAVELSAN employee and two other engineers, including one working at a Gülenist-linked software company, and attempted to cut off TRT's broadcast. The suspects are seen in civilian clothes in TRT security camera footage on the coup night, accompanying the troops that perpetrated the coup.

Demircan fled to the United States only hours after the coup attempt was quelled, Yeni Şafak reported, while the other three suspects are believed to be hiding in Turkey.

Gülenists have attempted to distance themselves from the foiled coup, despite testimonies by coup plotters who claim that they were carrying out orders given by senior figures.

In Istanbul, five men employed by Gülenist-run companies were arrested while they were trying to flee from TRT offices, after they were brought in to help the coup troops. These include the general managers of two IT companies known for Gülenist links, former employees of Samanyolu TV and Kaynak Holding, both of which have links to FETÖ. Both organizations were administered by government trustees following a previous investigation into FETÖ, the name given to the cult by prosecutors, under investigation following two previous coup attempts in 2013.

The July 15 coup attempt was foiled by forces loyal to the government, together with police units and public resistance. TRT buildings were retaken from the coup troops after unarmed citizens and police confronted the soldiers outside of the building in Istanbul's Ulus district, as well as in Ankara.

In another investigation into the role of Gülenists in the coup attempt, a court in northwestern Turkey ordered the arrest of Professor Muhittin Akgül, a Gülenist suspect and close friend of Adil Öksüz, a senior Gülenist sought for his role in the attempted coup. Öksüz, a point man for the terrorist cult's leader Fethullah Gülen, remains at large after a controversial court ruling ordered his release following the coup attempt. Testimony from one of the generals apprehended after the attempted coup pointed to Adil Öksüz as the man who organized the coup, together with the generals. The unidentified general told prosecutors that Öksüz first met fellow "imams" - Gülen's point men who relay his orders - and later the generals involved in the coup attempt, days before July 15, and arranged plans to seize power. The same general said Öksüz traveled to the United States to meet Gülen, and after Gülen greenlit the plans on July 13, the coup plot was executed. Hakan Evrim, another general arrested in the coup attempt, told investigators after his arrest that Öksüz planned a phone call between Gülen and Chief of General Staff Gen. Hulusi Akar, who was held hostage by coup plotters after he refused to join the attempted coup.

The National Police Department has set up a special task force to find Öksüz, probably the most wanted man after Fethullah Gülen himself, as part of the investigations into the coup attempt, in which thousands of officers have been detained or arrested. A task force composed of anti-terror police, intelligence and organized crime unit officers have sought Öksüz, while media outlets have reported he might have fled to Georgia, Turkey's eastern neighbor. Georgia is where Zekeriya Öz, a prominent prosecutor linked to FETÖ, fled earlier this year following an arrest warrant. Some social media users claimed to have seen Öksüz and Öz together at a restaurant in Georgia, although authorities did not confirm the reports. Adil's brother Ahmet Öksüz, a literature lecturer at Karabük university, was also arrested for membership in FETÖ, following an investigation after the coup attempt. Authorities have already canceled Öksüz's passport and are seeking an international arrest warrant. The search for him is focusing on Sakarya, the city where he worked and had several residences.

Like Öksüz, Muhittin Akgül was also released by a judge, but he was re-arrested following an objection by the Sakarya prosecutor's office. Akgül was a favorite TV personality of Gülenists, and appeared on religion-themed TV shows on now-defunct Gülen-linked TV stations together with Davut Aydüz, another professor from Sakarya University. Aydüz was previously arrested for FETÖ membership. Police arrested 27 academics in total from Sakarya University, amid a mass purge of Gülenist suspects in the wake of the putsch attempt.
Last Update: Aug 24, 2016 1:13 pm
RELATED TOPICS