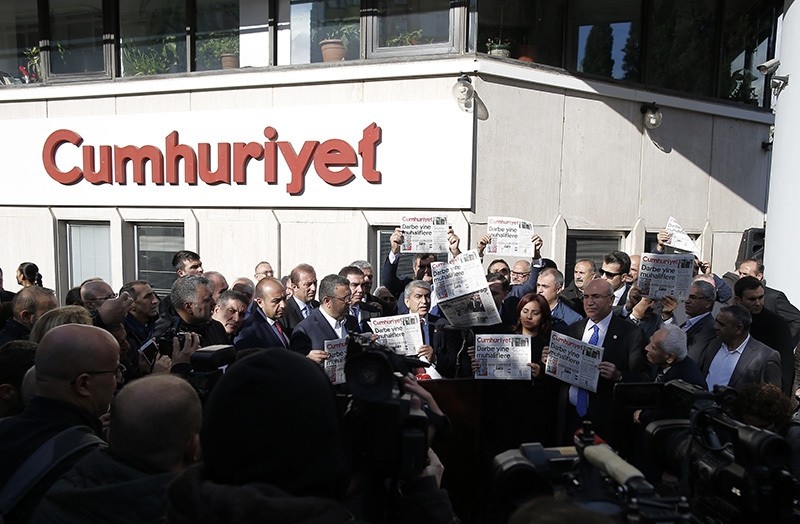 Journalists and lawmakers from the main opposition CHP hold copies of the latest Cumhuriyet newspaper outside its Istanbul headquarters on Oct. 31, 2016. (AP Photo)
by Daily Sabah with Agencies
Oct 31, 2016 12:00 am

Turkish police launched an operation on the Cumhuriyet newspaper over terror support charges on Monday as the paper's editor-in-chief Murat Sabuncu was detained.

Arrest warrants were issued for 17 other executives and journalists from the daily, including executive board chairman Akın Atalay, and authorities said he left for Germany one day before the operation. The paper's head of accounting Günseli Özaltay is also being sought.

Twelve people, including board members Bülent Utku, Eser Sevinç, Mustafa Kemal Güngör, Önder Çelik and former board member Bülent Yener, columnists and journalists Hikmet Çetinkaya, Aydın Engin, Güray Tekin Öz, Turhan Günay, Hikmet Aslan, Hakan Karasinir and caricaturist Musa Kart were detained. Police are conducting searches at the homes of the suspects. Board member and journalist Orhan Erinç was not detained due to his age, and his testimony will be taken in his home. Journalist Kadri Gürsel is also being sought by the police.

A statement by the Istanbul Chief Public Prosecutor's Office said that an investigation was launched on the executives of Cumhuriyet on August 18 for committing crimes on behalf of the Gülenist Terror Group (FETÖ) and PKK terror organization.

The statement added that irregularities in board member election to the Cumhuriyet Foundation on April 2, 2013 and articles legitimizing a coup attempt prior to FETÖ's July 15 coup attempt were among the charges.

Cumhuriyet's former editor-in-chief Can Dündar, who was sentenced in May by a court to five years and 10 months in prison for revealing state secrets, is among the suspects. An arrest warrant was previously issued for Dündar, who was freed when the Constitutional Court ruled against his arrest during trial, is now believed to be in Germany.

The operation was protested by the paper's staff and several lawmakers from the main opposition Republican People's Party (CHP), including Vice Chairman Erdoğan Toprak and Istanbul deputies Barış Yarkadaş, Mahmut Tanal, Selina Doğan and Sezgin Tanrıkulu, in front of Cumhuriyet's headquarters. A group from the Peoples' Democratic Party (HDP) also arrived to the paper's headquarters located in Şişli district.

Founded in 1924, Cumhuriyet is the oldest newspaper in Turkey that is still in business, and is considered among the flagships of Turkish press.

The paper had long followed a secular and left-wing republican editorial policy with a nationalistic tone in various periods. However, in latest years, the paper drew reactions from its usual reader base for adopting a more pro-Kurdish tone, often supporting the pro-PKK HDP.

Cumhuriyet has been among the leading opposition papers since the Justice and Development Party (AK Party) came to power in 2002.

The relations between the government and the paper soured when the paper published on May 2015 secret footage and documents about the case publicly known as National Intelligence Organization (MİT) trucks, in which several trucks of MİT carrying aid to Turkmen groups in Syria were illegally raided and seized by gendarmerie and judiciary officials allegedly linked to the FETÖ. The government stated the raid was illegal and it aimed to deteriorate Turkey's image in the world by accusing government with providing arms for Daesh in Syria.

Along with Dündar, the paper's Ankara representative Erdem Gül was also sentenced to five years in prison for the MİT trucks article.

The government accuses the FETÖ leader, Fetullah Gülen, of being the mastermind behind the coup attempt and a long-running campaign to overthrow the state through the infiltration of Turkish institutions, particularly the military, police, and judiciary, forming what is commonly known as the "parallel state."

Gülen has been living in the U.S. state of Pennsylvania since 1999.

Turkey is currently under a state of emergency following the defeated coup and had the order extended for three more months from Oct. 19 on. The post-coup probes saw thousands of public employees discharged and dozens of businesses and media instutions linked to the FETÖ were shut down or appointed with state administrators.