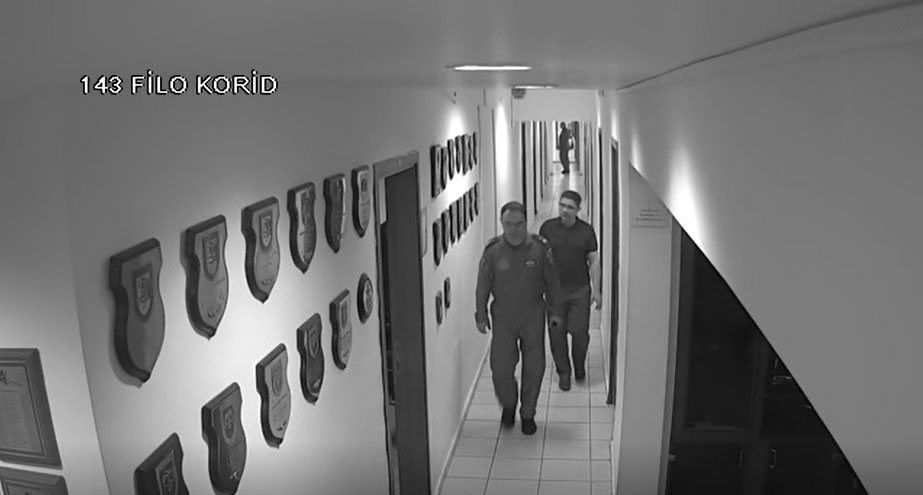 Kemal Batmaz was an unknown figure in Turkey until Wednesday. A criminal investigation and a series of security camerage footage surfaced that day and changed everything. Now the most talked-about man in the country, this former executive of a paper company, has shocked people with the revelation that he was allegedly one of the men commanding the brutal coup attempt on July 15 blamed on the Gülenist Terror Group (FETÖ). Prosecutors think he might be a figure with a higher rank than Adil Öksüz, the prime suspect accused of masterminding the coup plot.


Batmaz confidently walked in the halls of a military base in casual clothes while high-ranking officers wearing military fatigues pass by him and give him a military salute, security camera footage shows.

Prosecutors believe he might be the real commander of decorated officers loyal to the terror cult who moved to seize power from the elected government at the cost of 246 lives.

Batmaz, who is currently in prison after his capture at Akıncı Air Base in the capital Ankara hours after the putsch was quelled, was not the only man in civilian clothes at the base where fighter jets scrambled to strike strategic locations including the Presidential Palace. Indeed, he was with Öksüz, the second most wanted man in Turkey after FETÖ's leader Fetullah Gülen, for masterminding the coup. Harun Biniş, a ponytailed man seen shuffling through rooms at the command floor of the base in the company of pro-coup officers at one point in the security camera footage where Batmaz was seen, was also at the base. Ties between the three men who were not photographed together inside the base were discovered by prosecutors in Ankara. Only Öksüz, from the trio, remains at large, but prosecutors believe Öksüz, a theology lecturer by profession who is accused of drafting the plot for the junta's takeover, may be a subordinate of Batmaz.

Speaking to Anadolu Agency, Ankara Chief Prosecutor Harun Kodalak, which is conducting the investigation, said Batmaz was one of the critical figures in the coup attempt and as important as Öksüz. "He might even have a higher rank than Öksüz in (FETÖ)," Kodalak said. The chief prosecutor said the discovery of Batmaz's involvement that came months after he was detained around Akıncı Air Base, shed light on angles of the coup that remained in the dark.

Kemal Batmaz, who once worked as manager of Kaynak Kağıt, a company belonging to FETÖ-run business conglomerate Kaynak Holding is seen accompanying Adil Öksüz at Atatürk Airport in Istanbul in security camera footage made public on Wednesday as the two returned from the United States two days before the coup attempt. The duo's trip is viewed as confirmation of allegations that Öksüz traveled to Pennsylvania where Fetullah Gülen resides to get the cult leader's approval for the coup.

Harun Kodalak said Adil Öksüz was the most significant figure in the coup but he was "unfortunately" released, referring to a controversial verdict by an Ankara court to release him pending trial after Öksüz claimed he was simply near the base "to look for a land plot he planned to purchase," which was also the exact testimony of Harun Biniş after his capture.

The chief prosecutor said they sifted through the daily routine of Adil Öksüz before the coup and decided to focus on his travels to the United States. Öksüz was seen kneeling before Fetullah Gülen in his Pennsylvania retreat in a photo circulated after the coup attempt and the United States was the only country he frequently traveled to, often without his family and on personal expenses, since 1999. "We checked the passenger list of every flight he took and probed more than 4,000 passengers. Finally, we found the name Batmaz," Kodalak said, adding that they found Batmaz was already detained on the coup night. "We didn't know at first that he was a critical figure but our investigation showed he is as important as Öksüz and indeed, may be his superior [in FETÖ]," Kodalak adds. He also revealed Batmaz's initial testimony and unsurprisingly, he told in his initial testimony after his capture that he was "looking for a land plot to purchase."

"They apparently agreed before the coup that they would give the same testimony in case of capture," the chief prosecutor says.

He says officers giving a military salute to Batmaz was already sufficient to show his role in the coup attempt. "A civilian cannot enter [the command floor] of a military base and even if he does so, no military officer would give him a military salute," Kodalak emphasized. Although his face is obscure, the man giving the military salute to Batmaz is thought to be Brigadier General Hakan Evrim, a commander at the base who was involved in the coup attempt. Evrim was the commander who told Chief of Staff Gen. Hulusi Akar he can arrange a meeting between him and Fetullah Gülen when Akar was held hostage by coup plotters. Harun Biniş, who is accused of attending the meetings where Öksüz and military officers plotted the coup, would allegedly arrange the meeting by phone or videocall, Turkish media outlets reported. Biniş, an electronics engineer, was implicated in an earlier case of illegal wiretapping the offices of President Recep Tayyip Erdoğan during Erdoğan's tenure as prime minister.

Although not as prominent in the coup attempt as Batmaz, Öksüz and Biniş, a fourth man in civilian clothes was detained at the base after the coup attempt was foiled. He was Hakan Çiçek, owner of a school chain linked to FETÖ. Kodalak said Çiçek claimed he was at the base upon invitation of a pro-coup colonel who was also the parent of a child enrolled at his school but he failed to answer the questions about the social activity Özçetin asked from him to organize for the children at the base.