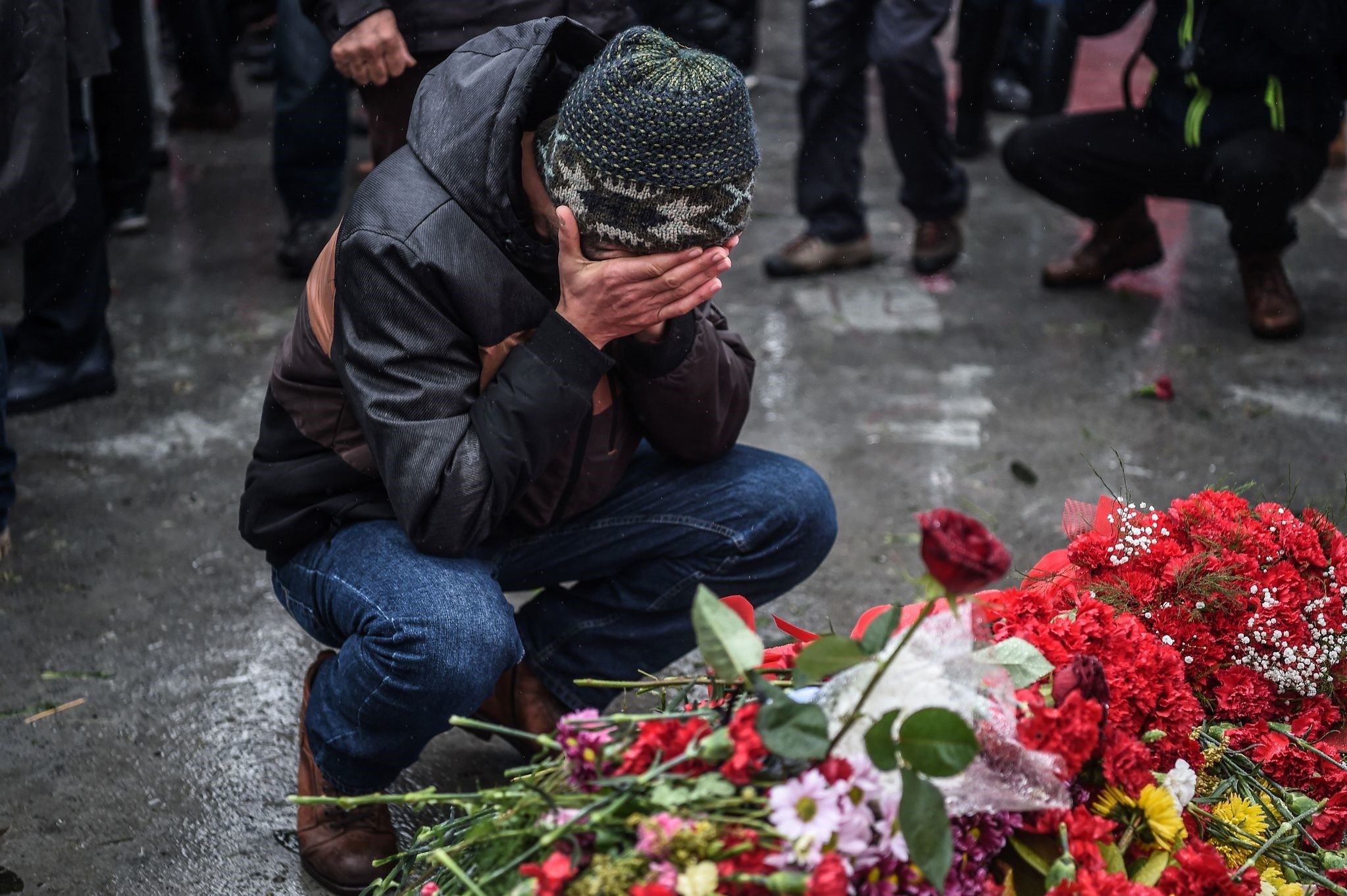 A grieving man reacts before the flowers laid for victims at the site of blasts.
by Daily Sabah Dec 14, 2016 12:00 am

Protests against Saturday's PKK/TAK attacks in Istanbul and vigils for the 44 victims, most of whom were police officers, continue while new details surfaced in the suspects' inquiry showing that they examined other sites as potential targets, with nearly half a ton of explosives in the trunk of their car before the attacks

The official one-day mourning is over but the Turkish public, though accustomed to acts of terror, is still trying to come to grips with the aftermath of Saturday's double attacks by the PKK's suicide team, the Kurdistan Freedom Falcons (TAK) terrorist group. A total of 44 people, mostly police officers deployed to provide security for a football match, were killed when two suicide bombers blew themselves up 45 seconds apart near the Vodafone Arena stadium overlooking the Bosporus. Since Sunday, anti-terror protests have been underway across the country and everyday people flock to the blast site for vigils in memory of the victims.

Meanwhile, a criminal investigation is underway into the attacks. The Interior Ministry yesterday said that 568 people with suspected links to the PKK have been detained as part of a terror probe. According to a written statement released by the Interior Ministry, 568 suspected PKK terrorists were detained in country-wide operations on Dec. 12-13. The ministry said that the operations were carried out in 28 provinces. 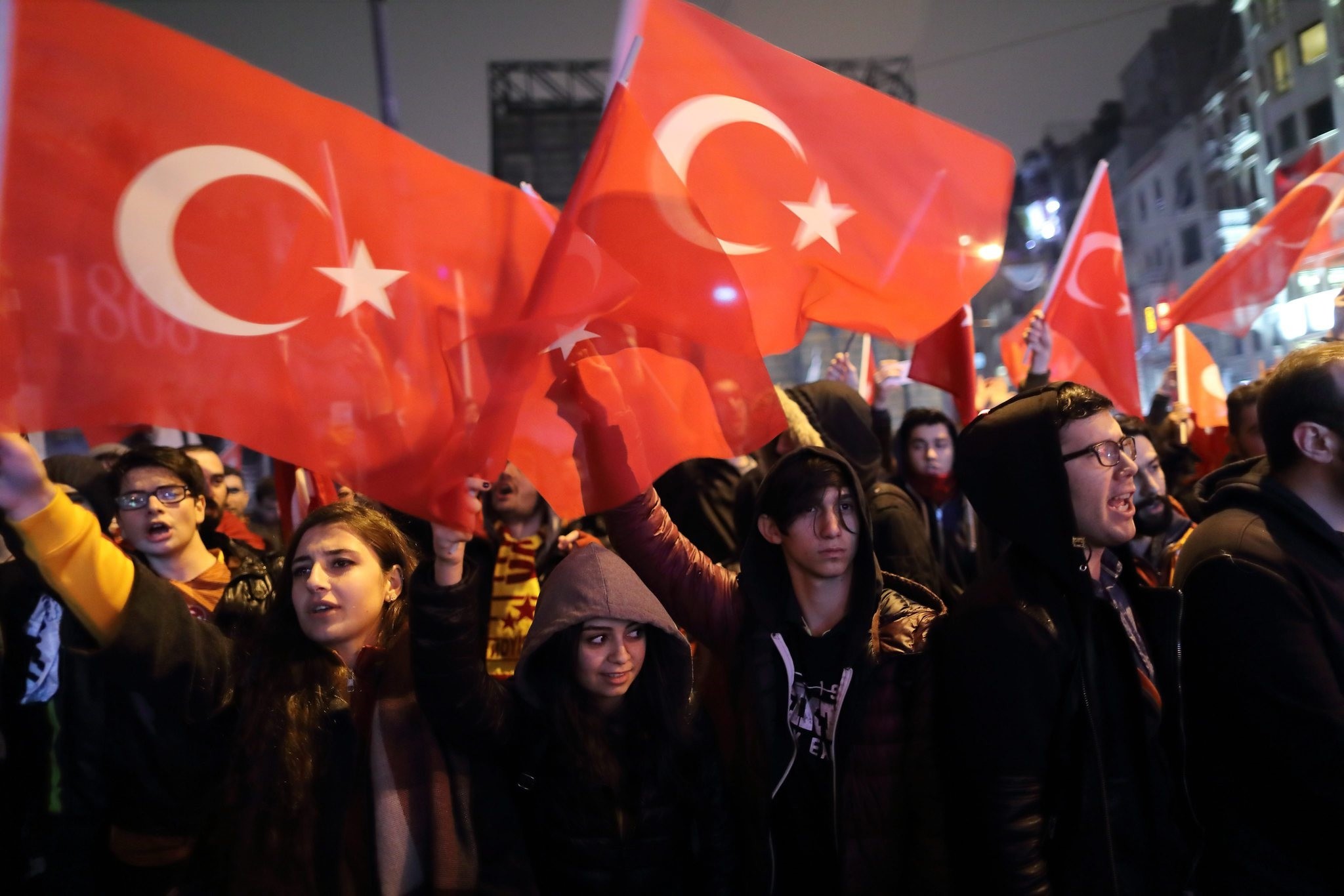 Supporters of soccer clubs marched to the blast site on Monday evening, denouncing the attacks.

Media reports on the investigation show the riot police deployed at the stadium were only one of the many targets terrorists sought to attack with about 400 kilos of explosives stashed in their Chevrolet Aveo.

A report in the Habertürk newspaper said two suspects, one woman and one man, passed by the headquarters of the Turkish National Police on Istanbul's Vatan Street twice, in addition to a military officers' club located near the headquarters, apparently scouting the sites as potential targets. The female suicide bomber was in the car detonated at the assembly point for riot police officers outside the Vodafone Arena while the male suspect triggered explosives strapped to his body in Maçka Park, adjacent to the stadium, when five police officers stopped him as he was walking toward a police bus parked near the park. The investigation shows the female suspect, captured in security camera footage, wore a headscarf to disguise herself.

The investigators discovered that the trigger mechanism found in the car had both manual and remote control, pointing to accomplices of the two assailants. Habertürk's report says the car was purchased days before the attack by a young man in his twenties and was handed to the suicide bomber in Maçka Park who was code named "Murat." The Kurdistan Freedom Falcons (TAK), a militant group affiliated with the PKK, which carries out terror attacks with high civilian casualties, claimed responsibility for the two attacks, according to a website linked to the group. The TAK last claimed responsibility for a November attack targeting the governorate of Adana province in southern Turkey that left two dead. The terrorist group, which has risen to prominence in the past two years, is viewed by security experts as a convenient way for the PKK, which struggles to legitimize its campaign of terrorism, to deflate blame for civilian casualties in its attacks. The group was also behind a car bombing in Istanbul that killed 12 in June, a March bombing in the capital Ankara that claimed 37 lives and a February bombing targeting a military convoy in Ankara that killed 29 people. 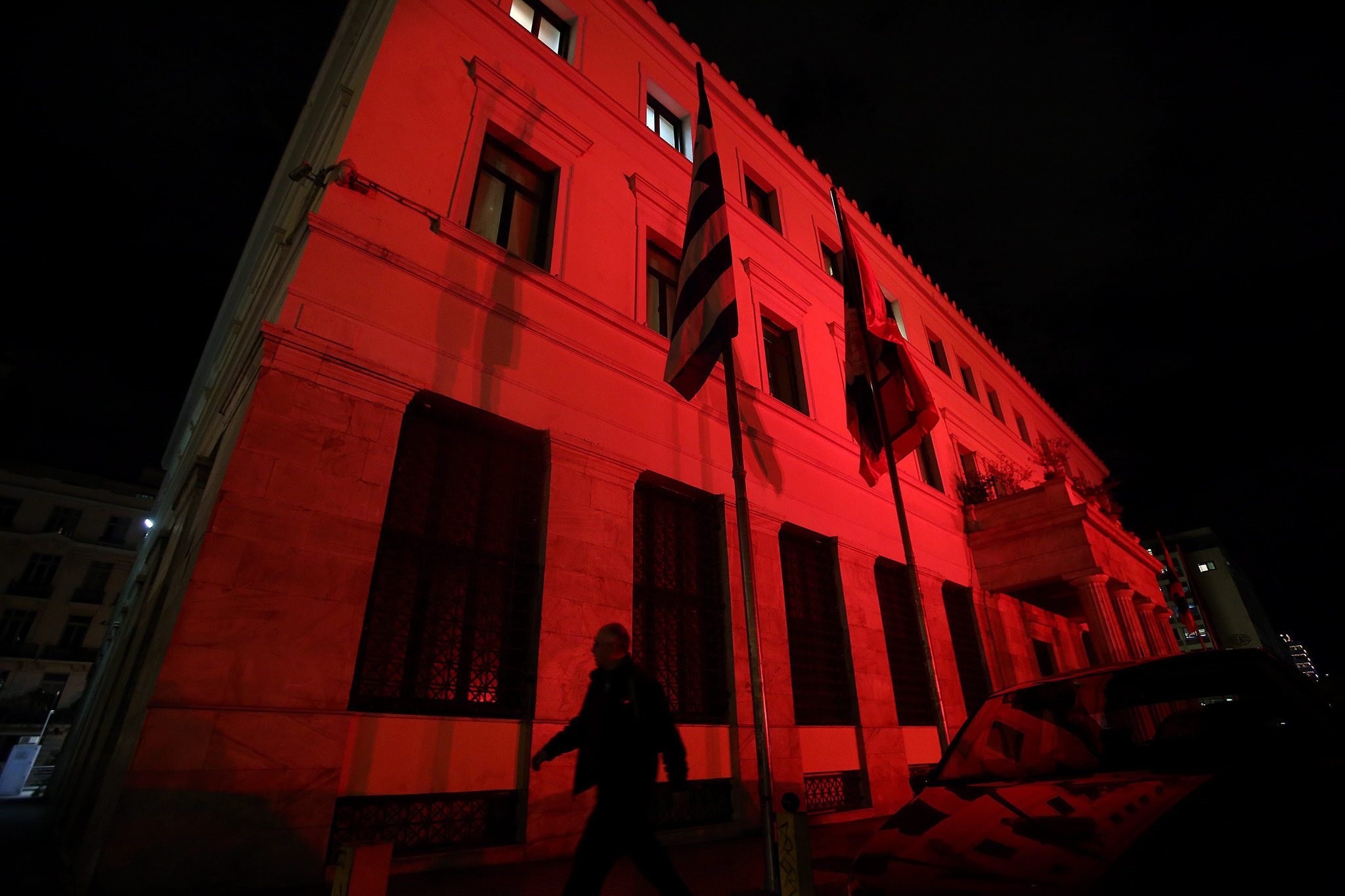 Athens City Hall was illuminated with red lights, the color of the Turkish flag on Monday night, in a display of solidarity with Turkey after the terror attacks.

Police are now trying to identify the suspects believed not to have a criminal history as terrorist groups increasingly turn to new recruits with no criminal records or convictions to avoid suspicion and for them to freely move within the country without detection. Some media outlets reported one of the attackers infiltrated Turkey from a Syrian region controlled by a group linked to the PKK.

On Monday evening and yesterday, people took to the streets in several cities to denounce terrorism. Waving Turkish flags, they condemned the attacks and remembered the victims.

The site of the blasts also remains crowded with visitors from all walks of life paying tribute to the victims. Fans of Beşiktaş sports club were among the visitors yesterday. They joined fans of other sports clubs at Martyrs' Hill, a slope next to the stadium that took its name after the attacks.

Elsewhere, funerals were held for the victims of the attacks. Selin Çelik, a young executive who was in a bus passing by the blast site when shrapnel pieces hit and injured her as she was heading to nearby Taksim Square to meet friends, was buried after funeral prayers in Istanbul's Kadıköy district. Deputy Prime Minister Mehmet Şimşek was among those attending the funeral for the 28-year-old woman. Twenty-five friends of Çelik penned a letter addressed to the victim titled "Wake Up" and distributed it to funeral-goers. Another funeral was in the Sarıyer district where 22-year-old Görkem Yazıcı was remembered. Yazıcı was in his senior year at Koç University in the city and was a player for the university American football team. His jersey draped the coffin while teammates bade farewell to the young victim who was returning from a birthday party for a friend when the explosion claimed his life.
RELATED TOPICS