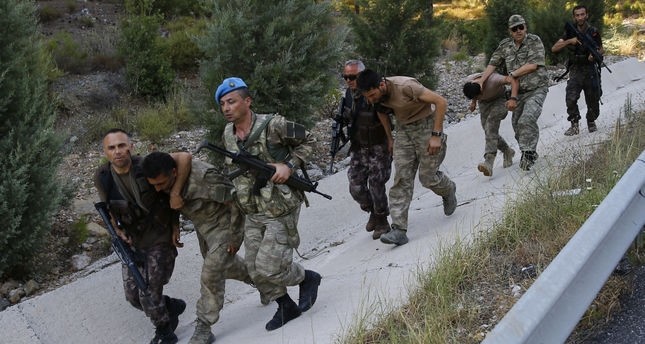 Soldiers and members of police's special forces unit accompany officers linked to the Gu00fclenist junta after their capture near the southwestern town of Marmaris. (AA Photo)
by Anadolu Agency Dec 20, 2016 12:00 am

A court will hear the case of 47 suspects who attempted to assassinate President Recep Tayyip Erdoğan on the night of the July 15 coup attempt.

The Chief Public Prosecutor of Marmaris, Mehmet Demirel said Tuesday that the suspects would appear at the Muğla Second Heavy Penal Court on Feb. 20.

President Erdoğan filed a complaint on Oct. 17 against the alleged members of a squad who attempted to assassinate him on the night of the July 15 coup attempt.

The president, who was on vacation in southwestern Muğla province at the time, had departed for Istanbul after being alerted about the coup bid and narrowly escaped an armed attack on the hotel he was staying at in Marmaris. The hotel was bombed 15 minutes after his departure.

"As part of the July 15 coup attempt by Gülenist Terror Group members, the suspects organized a military operation against our President on the same night when he was in Marmaris," said the petition filed by Erdoğan's lawyer.

The suspects attempted to assassinate Erdoğan in accordance with the orders of the terror group's leader residing in the U.S., the petition said, referring to Fetullah Gülen.

"It is obvious that the suspects not only aimed to assassinate the President and violate the Constitution, but they also attempted to undermine the state's independence and unity by creating chaos across Turkey," it added.

The suspects are charged with attempting to assassinate the President, violating the Constitution, undermining the unity and integrity of the state, and being members of a terrorist organization.

FETÖ is accused of organizing the defeated coup, as well as a long-running campaign to overthrow the state through the infiltration of Turkish institutions, particularly the military, police, and judiciary.