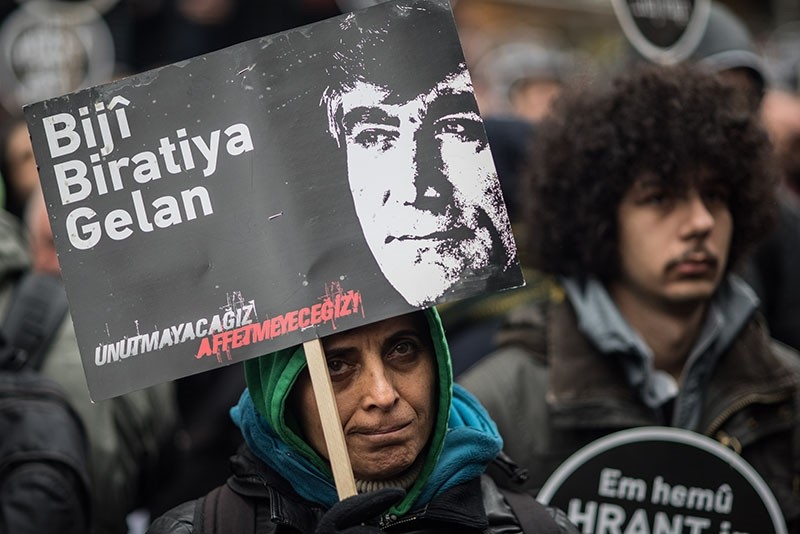 Thursday marked the 10th anniversary of the shocking murder of Hrant Dink, editor-in-chief of the Turkish-Armenian weekly Agos and a proponent of the resumption of ties between Turkey and Armenia. The outspoken journalist was gunned down outside his offices by a young ultranationalist in a murder that sparked public outrage and brought together people from all walks of life and different ideologies in a rare display of unity. Since 2007, it has been the same scene outside the Agos offices in Şişli district where Armenians accompany Turks to denounce the murder and commemorate the late journalist with banners reading "Buradayız Ahparig" (We Are Here, Brother).

Little changed in Turkish-Armenian relations but the trial on the murder shed light on something else: a terror cult that tried to use the murder for its own nefarious purposes. Several high-ranking police officers arrested for negligence and cover-up regarding the case are linked to the Gülenist Terror Group (FETÖ), which had a large number of infiltrators within the law enforcement and judiciary. FETÖ allegedly tried to use the murder plot to incite chaos in Turkey and more sinisterly, blame "a gang" of its critics in the plot so they could be imprisoned in sham trials schemed by their prosecutors. To achieve this, FETÖ-linked officials turned a blind eye to the murder although the gunman was an acquaintance of a police informant. Still, a slow legal process and the discovery of several Gülenist judges and prosecutors among those handling the trial brought the trial to its 10th year and activists keep calling for "justice to be served."

Amid tight security measures, a crowd carrying photos of the 53-year-old journalist laid flowers at the spot where he was shot dead. Dink's wife Rakel, who now heads a foundation bearing her husband's name promoting Turkish-Armenian dialogue, was among those commemorating the late journalist. People formed a human chain as Sarı Gelin, a folk song associated with the Armenian community was played from loudspeakers in Turkish and Armenian. At 15:05, the minute Dink was shot dead, the crowd observed a minute of silence and it was followed by a story Hrant Dink told in a video recorded before his death.

The group again called for the punishment of the true culprits in the case, referring to the former officials that turned a blind eye to the murder despite a string of death threats targeting Dink.

In her speech to the crowd, Rakel Dink said she was still mourning her loss after 10 years. "Hrant, it has not been an easy 10 years. It is painful that you died and it is more painful that you were killed as the result of a heinous plot," she said. Dink's widow also touched upon the trial process and said the family was "insulted" by perpetrators during the trials and the process has been dragged down. "The court first told us the murder was not tied to a gang and then, they blamed 'a few ultranationalist youths'. Then it was revealed that FETÖ was behind it. We are still waiting for this trial to conclude. Apparently, the state was responsible for this murder and if it is not, it is its responsibility to find the perpetrators and punish them," she said. Rakel Dink said the murder trial is a key part of Turkey's democratization process and the only thing that gave her hope despite the wide condemnation from the general public.

Dink was known for his criticism of both sides of the debate over Armenia's claim of "genocide" by the Ottomans in 1915 and Turkey's formal stance rejecting the genocide claims but he ultimately drew the ire of ultranationalists. Though he complained of death threats before his murder, it was later claimed that Ogün Samast was "brainwashed" by a police informant to commit the murder, according to media reports.

A verdict still seems distant in the trial for now as all defendants are engaged in a blame game, from Ali Fuat Yılmazer, a prominent police intelligence chief linked to FETÖ to Celalettin Cerrah, former police chief of Istanbul.