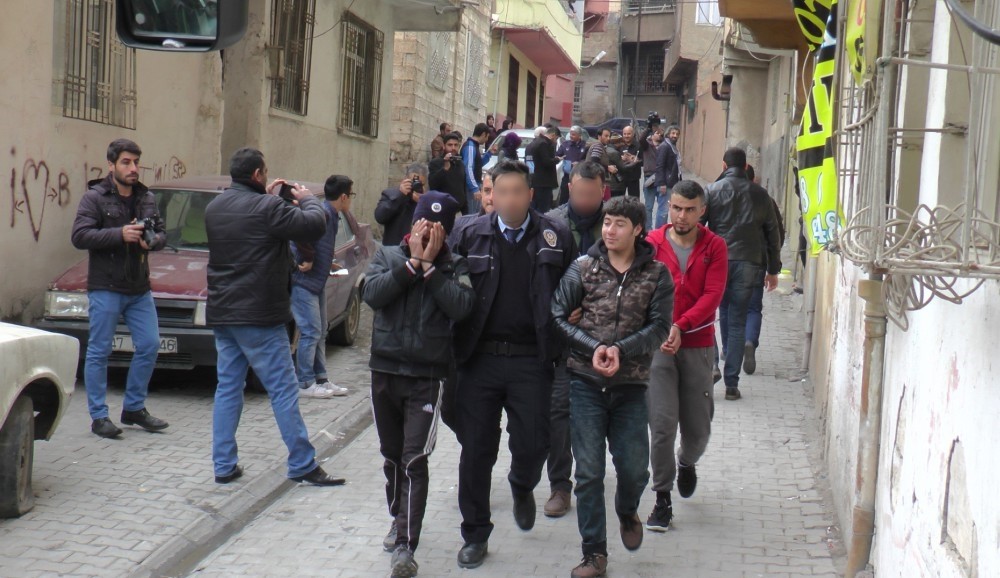 Police officers escort handcuffed Daesh suspects after their detention in the southeastern city of u015eanlu0131urfa on Sunday.
by Daily Sabah Feb 07, 2017 12:00 am

As the Daesh terrorist group keeps its threats against Turkey afresh, the country responded with a nationwide crackdown swooping on sleeper cells. The number of suspects nabbed in Sunday's operations surpassed 700 while officials pledged for more counterterror raids

In one of the biggest crackdowns targeting the terrorist group, Turkish security forces detained 763 Daesh suspects on Sunday in operations across the country, as the latest figures released yesterday showed a considerable rise from the original 400 suspects. The Interior Ministry, meanwhile, announced the total number of detainees in operations against the terrorist group last week was 820 with Sunday's detentions included. Starting from the early hours on Sunday, anti-terror police raided locations in 29 cities and detained 763 people according to media outlets. Anadolu Agency (AA) reported that police also found documents, digital material related to Daesh propaganda and a small number of small firearms, along with ammunition, during the raids. The Turkish National Police said in a statement that the terrorist group was planning attacks in the country and escalated its propaganda to recruit new militants, noting that online publications linked to the group openly called for its sympathizers to attack targets in Turkey.

Daesh, responsible for a string of attacks in Turkey that killed dozens last year, was last accused of carrying out an armed attack at a popular nightclub in Istanbul which claimed 39 lives during New Year's Eve celebrations. The group recently released a video where a hooded man carrying a backpack passes by police patrol cars and Istanbul's famous landmarks, vowing to hit the city again.

Sunday's raids targeting the terrorist group come a few weeks after the gunman at the Istanbul nightclub, identified as Uzbek-born Abdulgadir Masharipov, was captured. He was part of the terrorist group's sleeper cells in the country and media outlets speculated that the nationwide operations might be the result of his testimony.

Since Daesh has emerged as a terrorist group in war-torn Syria, Turkey has detained over 5,000 Daesh suspects and deported over 3,290 foreign terrorist fighters from 95 countries and refused more than 38,269 individuals' entry to Turkey. Frustrated over the rise of Daesh in war-torn Syria, Turkey launched Operation Euphrates Shield last year in a bid to help Syrian opposition forces recapture towns from the terrorist group and prevent a spillover of violence from Daesh-controlled towns near the Syrian-Turkish border.

Turkish media outlets reported that anti-terror police and the intelligence unit of the Turkish National Police established a special unit to hunt down Daesh sleeper cells and more operations are planned for further clampdown on the group.

The Sabah newspaper reported that the crackdown came after intelligence revealed that the terrorist group was planning to carry out attacks during the heated campaign process for the upcoming referendum on changes to the Turkish Constitution that will give more powers to the administration for a more efficient anti-terror fight. The raids were the culmination of information derived from online correspondence between the terror suspects and phone calls between militants under surveillance. Sabah also reported that the militants were in close contact and sneaked into Syria recently to fight for the terrorist group that controls vast swathes of land in Syria as well as in Iraq. During the operations, police also discovered the routes that the militants used to enter Syria and return to Turkey and it was found out that the militants first traveled to Iraq and infiltrated Syria through its porous border with Iraq. The suspects reportedly underwent training in Raqqa, a stronghold of Daesh in Syria, for bomb making. The majority of the suspects nabbed in cities from Istanbul to Şanlıurfa near the border were foreigners from Iraq, Russia, Turkmenistan and Syria.

Answering reporters' questions at a press conference yesterday on Daesh operations, Deputy Prime Minister Numan Kurtulmuş said, "Our rhetoric to defeat terrorist groups is not an empty promise. Turkey is engaged in a struggle against terrorist groups from the PKK to Daesh and eventually, we will gain the upper hand. Every necessary operation to that extent will be conducted. We will both stop threats from abroad and find and bring those supporting these terrorist groups to justice. This latest operation against Daesh is part of those efforts. It aimed to round up those acting as 'human resources' for Daesh, to cut off their links with the terrorist group and neutralize threats to Turkey."

Kurtulmuş also acknowledged "multiple threats" against Turkey while answering a question on threats against Muslim clerics in Turkey in a pro-Daesh publication. "We have additional security measures in place against such threats," Kurtulmuş said, without further elaboration.
RELATED TOPICS