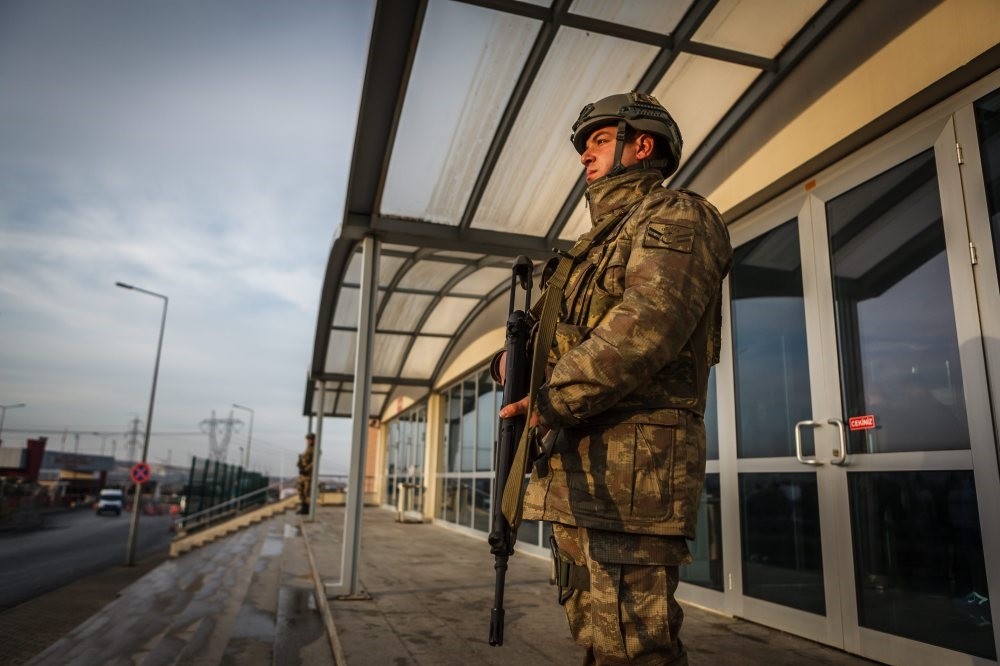 A soldier stands guard outside the courthouse in Silivri where 74 defendants stand trial on coup charges.
by Daily Sabah Feb 08, 2017 12:00 am

Defendants face life sentences in two new trials in Istanbul and Ankara over the July 15 coup attempt blamed on FETÖ. In their first testimonies, military officers accused their superiors in a petty blame game, claiming they simply ‘followed orders'

As Turkey awaits the fate of the top military brass involved in the July 15 coup attempt, the trials of lower ranking officers are continuing with defendants claiming in their testimonies that confusion and a military mindset was why they had followed orders without questioning them. The coup attempt, being largely blamed on the Gülenist Terror Group (FETÖ), killed 248 people including civilians opposing the attempt. It was quelled by a strong public resistance with the assistance of police and anti-coup soldiers. Hundreds of defendants face aggravated lifetime prison sentences for joining the coup but so far, none have pleaded guilty despite being caught in the act and/or immediately after the putsch attempt.

İzzet Henek, a helicopter pilot at the headquarters of the Turkish army's elite Special Forces, was one of those claiming innocence for his role in the coup attempt.

"Subordinates never question the orders of their superiors as long as the order is not illegal," Henek told a court in the capital Ankara where his military base is located.

Henek transported the commander of the base, Col. Ümit Tatan, to a military base controlled by coup plotters when Tatan opposed to join the pro-coup officers. The defendant was among 26 others who stand trial in the first case in the capital against the coup attempt.

Henek went on to tell the court that his brigade commander told him to take the base commander to the Akıncı Air Base and though he did not want to do it, he complied with the order anyway. He claimed he was not aware that all military flights were banned by the Office of General Staff that night after the coup attempt surfaced. He also claimed he did not know that a coup was underway, though he was in a crowded base where he and others were summoned to by their pro-coup superiors. He also denied links to FETÖ.

"I cannot question an order that is not illegal," Henek said, claiming he was not aware that Tatan was forcibly taken to the helicopter he was piloting.

Özalp Yeşil, a helicopter pilot who was part of the squad that took Gen. Semih Terzi to another military base of the Special Forces, said he was "confused about who was a friend and who was an enemy" that night. Terzi arrived at the Special Forces base from the southeastern city of Diyarbakır to take over the base in the name of coup plotters but he was shot dead by Ömer Halisdemir, a sergeant who became a symbol of anti-coup resistance for his heroic act that ultimately prevented a key location from falling into the hands of pro-coup troops.

Yeşil said his commander told him "a coup was happening" and summoned him to the base on July 15 but he thought he would join those resisting the coup. He said he was tasked with taking Terzi to a military hospital after he was injured and heard over the radio that other military helicopters were ordered to shoot police vehicles.

"I didn't know who was a friend and who was an enemy. I was confused. Then, the coup was halted," he told the court.

Like Henek, he said military personnel would never question orders.

In Istanbul, 74 defendants are on trial for attempting to capture the Istanbul offices of the ruling Justice and Development Party (AK Party). The defendants, who testified at yesterday's hearing, mostly low-ranking sergeants, gave an account on the coup night and how they thought it would be an anti-terror drill when they were ordered to take to the streets. They also explained how their superiors ordered them to fire on the public resisting the putsch.

Fahrettin Kemal, a specialist sergeant, said he realized they were at the AK Party offices only when he saw the sign outside. He said Capt. Gökhan Güney commanded them to order the troops to fire on the public gathered outside the party offices to protect it but he refused to comply with the orders. He said the civilians then helped them separate from pro-coup troops.

Arif Emre Esen, another sergeant said he only followed orders, he also added that, he and other troops were "commanded" by two high-ranking officers they had never seen before.

The main office of the AK Party in Istanbul was the target of the junta, which also tried to seize the governorate, city hall and other strategic sites to quash any opposition to their coup. The occupation attempt came shortly after the public noticed that the presence of soldiers on the streets and on a major bridge in the city was the start of a coup attempt rather than an anti-terror drill as many were first led to believe.

A total of 1,235 lawsuits were filed against FETÖ after the attempted putsch. Out of those, 78 of them are directly related to the coup, which was allegedly carried out by military officers loyal to the U.S.-based preacher Fetullah Gülen and his sprawling empire of companies and schools. The coup trials alone have 1,986 defendants, with 1,232 of them currently being held in custody in 21 provinces.

Following the coup attempt, prosecutors across the country launched 10,165 criminal inquiries into FETÖ and the coup attempt. The coup trials started last year, although senior military brass involved in the putsch are still waiting for their first hearings. Moreover, the first trial was in the western city of Denizli, where a general and 59 others face multiple aggravated life sentences. Likewise, the first verdict was in the eastern city of Erzurum, where a colonel and a major were sentenced to life for their involvement in the coup attempt.
RELATED TOPICS