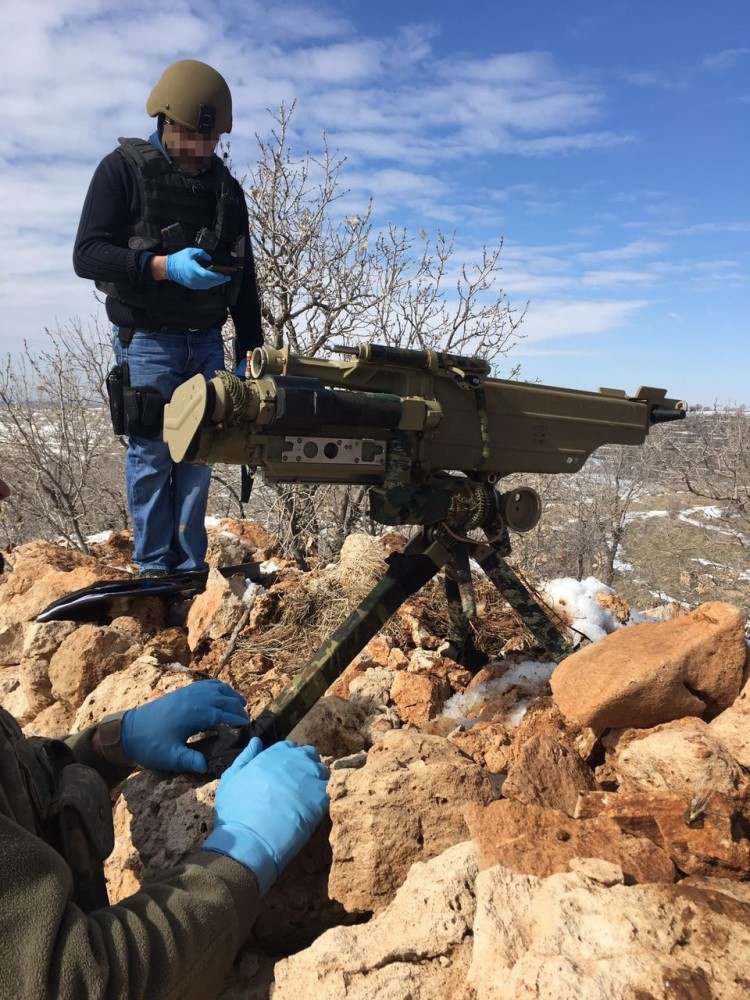 Security officials examine the missile launcher.
by Daily Sabah Feb 09, 2017 12:00 am
Security forces seized a surface-to-air missile launcher in possession of the PKK for the first time, pointing to the expanding arsenal of the group that has been targeting the country since the 1980s.

METIS M1, used for firing anti-tank missiles and surface-to-air missiles, was found in operations against the PKK in southeastern Turkey on Monday and Tuesday and was shown to the press yesterday, along with anti-tank missiles and a large number of munitions. Authorities said they also found 500 kilos of homemade explosives in the same operations, which spanned two rural districts of Nusaybin, a southeastern town. The PKK, which claims to fight for Kurdish self-rule in the southeast, often targets security forces and civilians in the region.

The weapon, in use since 1992, was recently upgraded and used in recent conflicts, recently, in Turkey's southern neighbor Syria. It is believed the terrorist groups in Syria had access to the weapon after they looted Syrian army depots. The PKK is linked to the Democratic Union Party (PYD) and its armed wing the People's Protection Units (YPG), a militant group active in Syria that has been tied to several terror attacks in Turkey.

President Recep Tayyip Erdoğan said last year that weapons delivered to Syria by an international anti-Daesh coalition ended up in the hands of the PKK, most likely through its Syrian affiliate. Turkish media outlets had reported that the militants had obtained long-range missiles.

The PKK claimed the downing a Turkish military helicopter last year, though it was not confirmed. The terrorist group has killed thousands since it was established in the early 80s and security experts say they might plan new attacks this month, which will mark the anniversary of capture of its leader Abdullah Öcalan in 1999. Öcalan has remained jailed since then on an island prison.

The plans for the new terrorist attacks were found in possession of a terrorist recently captured in Diyarbakır's Bağlar district showing that the PKK was preparing to stage a comeback after a series of successful anti-terror operations last year that almost wiped out its presence in the southeast. According to Turkish media reports, the memory cards found in possession of the terrorist included orders, instructions and plans prepared by the YPG in Syria to be transferred to PKK terrorists in Diyarbakır.

Ankara considers the YPG a terror group and the Syrian offshoot of the outlawed PKK, which itself is listed as a terrorist organization by the U.S., Turkey and the EU.

Turkey argues that there was no difference between the YPG and the PKK, as they share the same leadership, ideology and organic organizational links. Consequently, Ankara has repeatedly said any military support given to the PYD/YPG would eventually be transferred to the PKK and ultimately be used against Turkey.
RELATED TOPICS