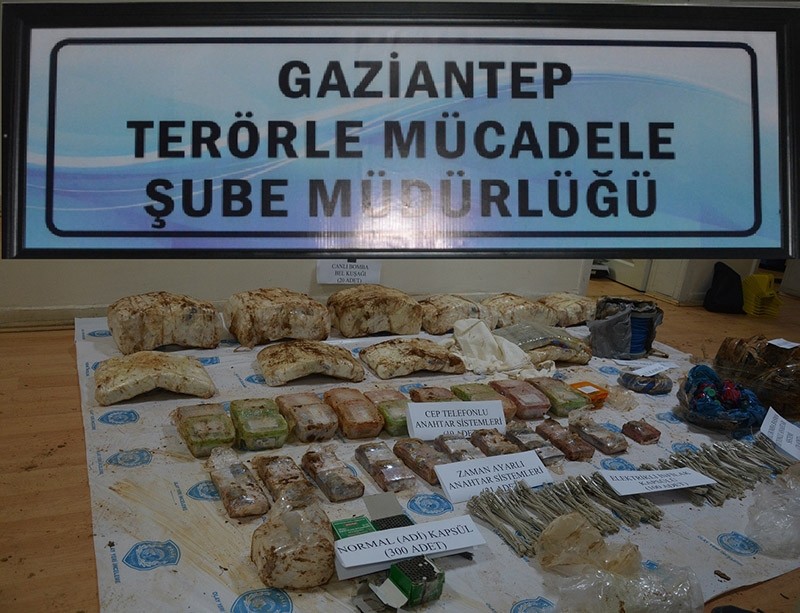 Police units in Turkey's southern Gaziantep province captured four Daesh terrorists on Thursday who were assessed to have been plotting sensational attacks in the country in the latest blow to the terrorist group that has carried out multiple attacks throughout the country.

Acting upon a tipoff, Turkish counter-terror and intelligence units identified the terrorists and detected their hideout. One of the suspects was already wanted by police for "membership of a terrorist organization." Police did not reveal the identity or nationalities of the suspects.

The terrorists were captured alive in an operation, while bomb-sniffing dogs found explosives, weapons and ammunition buried in an empty slot.

Gaziantep, as Turkey's largest city in the southeast bordering Syria, is among the cities where Daesh terrorists are most active.

Police in Gaziantep have been crucial in cracking down on the terrorist group's recruitment, financing and attacking activities in Turkey, while significantly severing its ties with the rest of the world.

Daesh was subject to one of the biggest crackdowns last Sunday when more than 700 suspects were detained in nationwide operations. The operations came about one month after a Daesh gunman killed 39 people at an Istanbul nightclub on New Year's Eve.

Turkish media outlets recently reported that the terrorist group was planning to carry out attacks during the heated campaign process for the upcoming referendum on changes to the Turkish Constitution that will give more powers to the administration for a more efficient anti-terror fight.

Since the emergence of Daesh as a terrorist group in war-torn Syria, Turkey has detained over 5,000 Daesh suspects and deported over 3,290 foreign terrorist fighters from 95 countries and refused more than 38,269 individuals' entry to Turkey.

Frustrated over the rise of Daesh in war-torn Syria, Turkey launched Operation Euphrates Shield last year in a bid to help Syrian opposition forces recapture towns from the terrorist group and prevent a spillover of violence from Daesh-controlled towns near the Syrian-Turkish border.

Daesh was behind a string of attacks last year across Turkey and the terrorist group has issued a new threat, vowing to strike Istanbul with new attacks in a video released by Daesh-linked social media accounts.