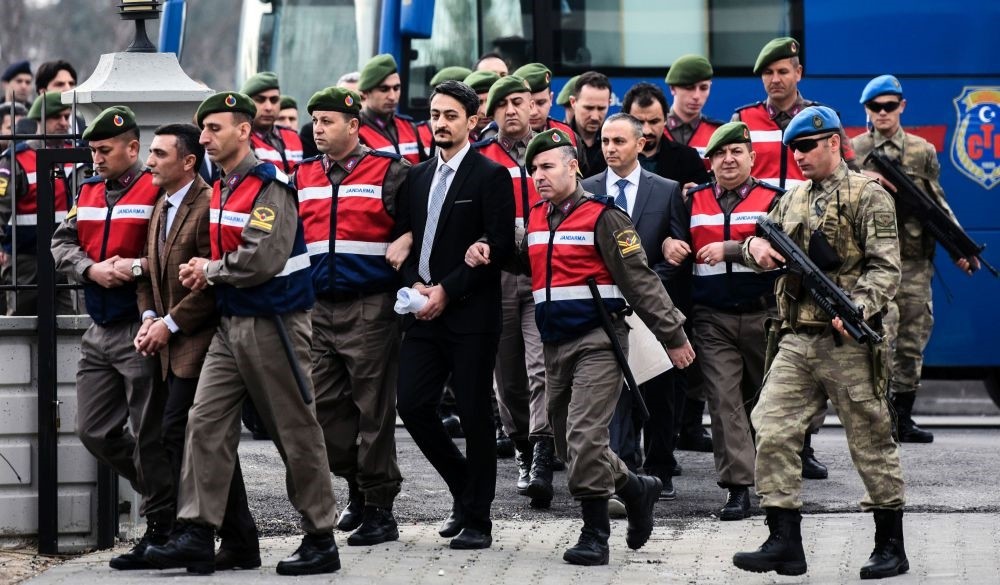 Troops escorted the defendants to the courtroom in Monday's hearing.
by Yusuf Ziya Durmuş Feb 20, 2017 12:00 am

Soldiers accused of the attempted assassination of President Erdoğan during the July 15 coup attempt blamed on FETÖ appeared before a court for the first time Monday in the city of Muğla. A pro-coup officer, who led the team of assassins, said he took orders from Semih Terzi, a pro-coup general killed during the putsch bid

The first hearing of one of the most anticipated trials since the failed July 15 coup attempt started Monday in the southwestern city of Muğla. Forty-four defendants accused of attempting to kill President Recep Tayyip Erdoğan during his stay in the city at the time of the coup appeared before the court where they are being tried for links to the Gülenist Terror Group (FETÖ), which is charged with masterminding the putsch bid.

Brig. Gen. Gökhan Şahin Sönmezateş, who led the team of assassins which was entirely comprised of military officers, said he was instructed to "take" Erdoğan by Semih Terzi, another brigadier general, who was killed in the capital of Ankara as he tried to take over a military base.

Amid tight security measures and against the backdrop of a rallying call for the reinstatement of the death penalty, 44 defendants were taken into the conference hall of a local chamber of commerce, as the existing courtroom in the city was unable to accommodate all defendants and plaintiffs.

Sönmezateş was in command of 28 officers from different military units gathered for the purpose of assassinating or capturing President Erdoğan while he and his family were staying in a hotel in the district of Marmaris in the Muğla province for a vacation.

He managed to flee after the mission failed due to Erdoğan and others vacating the hotel after learning of the unfolding coup attempt. Sönmezateş was captured in the capital of Ankara days after the coup attempt.

Repeating his initial testimony, Sönmezateş told the court he had no ties to FETÖ. "I would invoke the remorse law if I had been a member of FETÖ," he told the court yesterday — referring to a law that allows defendants to have reduced sentences in exchange to pleading guilty to FETÖ membership and testifying about their links to the terrorist group.

He said Terzi was "someone I worked with closely" though he did not elaborate and did not say why he would carry out an order from someone in the same rank as him in the military. "We had two phone calls, on July 11 and July 13. He told me to carry out the mission," he said, claiming it was "sanctioned" by the Office of the Chief of General Staff, the highest rank in the army. He also said he did not attend a meeting of pro-coup generals in Ankara a few days before the putsch bid.

Sönmezateş also shifted the blame to others, claiming he did not pick the team of assassins himself and expressed his "condolences" for the "martyrs" in reference to those killed by pro-coup troops. It is not clear whether Sönmezateş fired the shots that killed two security personnel outside the hotel where Erdoğan was staying.

Sönmezateş claimed to work for Semih Terzi, who was shot dead in a heroic act by Ömer Halisdemir, a non-commissioned officer, as Terzi and other pro-coup troops flew to Ankara from a southeastern city and tried to take over the headquarters of the Special Forces, an elite branch of the army. Halisdemir, hailed as a hero for his effort to stop the takeover of a military unit critical in preventing the coup, was killed by Terzi's men immediately after shooting him.

Sönmezateş would have been appointed the "head of national intelligence" if the Gülenist junta succeeded in seizing power. He said everyone "blamed" him for the coup efforts, but that he was not a member of FETÖ and only carried out orders by the "junta" to "get" Erdoğan. "When we went [to the Marmaris hotel where Erdoğan was staying], we were not aware that Erdoğan had already left for Istanbul. I didn't plan this mission. It would have succeeded if I had," Sönmezateş bragged at the hearing. "I only acted in line with the chain of command," he claimed.

Other defendants were scheduled to testify when Daily Sabah went to print. Hearings will continue until Friday and will resume next Tuesday while the court expects to wrap up what it calls the "first stage" on March 15 to start the next stage in April.

The indictment against the soldiers says Fetullah Gülen, the elusive FETÖ leader, personally approved the plan to capture or assassinate Erdoğan during the putsch attempt, like he did for other coup plans. He is also believed to have ordered the captures of strategic locations, from the presidential palace to the army's headquarters.

Outside the conference hall where the defendants were taken, a group of protesters chanted slogans against Gülen and his terror cult calling on the U.S. to extradite him. Some chanted slogans calling for the reinstatement of the death penalty, which Turkey scrapped years ago during its European Union membership bid. Following the putsch attempt, the government has pledged to reinstate it if public appeal grows.

"For the first time in the history of Turkey, the nation stood against a coup and won, and today we have had its first trial in Muğla," Salim Yılmaz, a teacher amid the crowd carrying banners in English condemning Gülen, told Anadolu Agency (AA).

A total of 248 people were killed and hundreds were injured when pro-coup troops opened fire on unarmed civilians who had confronted them in an effort to stop the troops in Istanbul, Ankara and other cities. "We are here to see for ourselves that those traitors are properly punished. By God's will, they will have the heaviest punishment," Gökhan Çakır, another protester, told AA. Under the current laws, the heaviest punishment is aggravated life imprisonment, a sentence sought for most officers involved in the coup attempt.

Speaking to reporters outside the courtroom, Hüseyin Aydın, lawyer for President Erdoğan, the main plaintiff in the case, said the trial was "of high importance" among the other trials on the coup attempt. "It is the first time that military officers have tried to assassinate the president, who also serves as their commander-in-chief. In this sense, it is a landmark trial," he said.

Aydın dismissed the statement by defendants given in their pre-trial testimony that they only sought to capture Erdoğan alive, something repeated by Sönmezateş at yesterday's hearing. "The evidence and their preparations [for the attack], show this was not the case. It is absolutely certain that they were at the scene with the intent of murdering the president," Aydın said. Also sharing his observations of the defendants, as few journalists were allowed in the courtroom, Aydın said they were extraordinarily calm and showed no sign of remorse. "We know that they believed that what they had done was something 'sacred,'" he said, referring to the defendants' links to FETÖ, which uses religion as a pretext for their illegal actions. "These people are members of elite military units and as we have seen in the indictment, they were among the most devout members of [FETÖ] within the army," he said.

Zekeriya Kuzu, a sergeant who was a member of the team of assassins, said in his initial testimony that all the soldiers involved in the assassination attempt were members of "Hizmet," the name Gülenists gave their movement.

In the aftermath of the coup attempt, FETÖ faces a new wave of trials. A total of 1,235 lawsuits have been filed against FETÖ since the attempted putsch. Out of those, 78 of the lawsuits are directly related to the coup.

The coup trials alone have 1,986 defendants, with 1,232 of them currently being held in custody in 21 provinces. The first trials opened last year in Denizli and Erzurum, and more followed in Ankara and Istanbul.
Last Update: Feb 20, 2017 7:16 pm
RELATED TOPICS