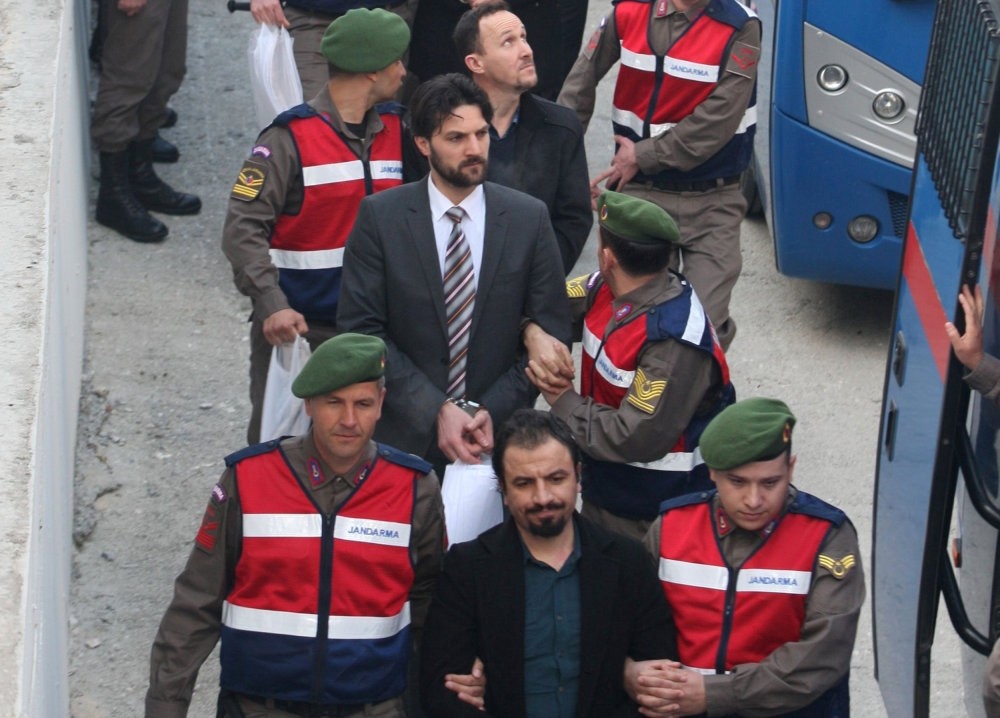 They are 'patriots' and soldiers who 'followed orders.' The testimonies of pro-coup troops who attempted to assassinate President Erdoğan during the July 15 putsch bid blamed on FETÖ claim they were 'patriotic' while betraying their country or simply following the highly questionable order to take out the president

With th alleged non-military masterminds of the July 15 coup plot at large, the officers who tried to murder President Recep Tayyip Erdoğan during the foiled putsch are blaming their superiors, claiming that they only followed orders when they stormed Erdoğan's hotel. Their superiors, meanwhile, admitted that they indeed volunteered to topple the elected government and said they tried to kill Erdoğan, who also serves as their commander-in-chief, out of "patriotic fervor which triggered earlier coups." As the trial of the military officers accused of the assassination attempt on President Erdoğan entered its second day yesterday, a blame game is afoot.

Taner Berber, who led one of two teams of assassins comprised of army officers, claimed he was not aware that they were there to kill the president when they were dispatched to Marmaris, a resort town in southwest Turkey, on July 15.

His statement came a day after Gökhan Şahin Sönmezateş, the general who oversaw the team of assassins, admitted he joined the coup attempt upon order of another general, Semih Terzi. Sönmezateş said he did it with the motives of leaders from previous coups. They were "patriotic officers trying to defend their country," the general jailed on coup charges said.

Maj. Şükrü Seymen, another suspect in the case which 41 defendants are being tried for attempting to assassinate President Erdoğan, also said in the first day of the trial that he volunteered to join the coup attempt and he would accept the "death sentence" for it.

Taner Berber told the court in Muğla, the city where Marmaris is located, that he only noticed there was a coup attempt when they were sent to take out President Erdoğan. Erdoğan and his entourage, who were on vacation at a hotel in Marmaris on July 15, escaped the likely massacre when they were alerted about the coup at the last minute. Erdoğan's narrow escape helped him rally the nation against the coup plotters and eventually, at the cost of 248 lives, the putsch was quelled.

Although he claimed he acted upon the orders of his superiors and in line with the military rules of obeying orders without question, Berber also admitted he made "mistakes" while doing so, such as supplying a cache of ammunition to another team of pro-coup troops he did not know.

Berber said Gen. Sönmezateş asked him to form a team of elite soldiers for "an anti-terror operation" and they later met another team in the western city of İzmir where he and others were based. Then, Sönmezateş briefed the two teams that the Turkish army had "seized power" and "declared martial law" but they were still told that the mission was about capturing a senior terrorist figure. Berber was commanding the back-up team for the Special Forces troops and was behind the team when they approached Erdoğan's hotel.

"I heard gunshots and my team advanced. I came across three civilians and when we searched them, we saw one of them was a plainclothes police officer. We handcuffed them and when Maj. Şükrü Seymen ordered us to retreat, we left," he said.

Questioned upon why he did not surrender when he understood the teams were clashing with police, Berber said he was scared and thought about "surrendering somewhere safer." He denied that their mission was an assassination attempt and said he and the others only "followed orders." Berber also denied links to the Gülenist Terror Group (FETÖ).

Sönmezateş, the first defendant to testify at the trial on Monday, claimed he received "orders" from Semih Terzi, a pro-coup general killed while trying to take over a military base in the capital Ankara. Sönmezateş told the court that he acted with the "motives" of other coup leaders, naming Kenan Evren, the architect of the 1980 coup, as inspiration. He also said he simply acted "to defend the country" though he did not elaborate.

Şükrü Seymen, who acted as Sönmezateş's right-hand man in the assassination mission, also admitted his guilt. In a brazen defense, rare among other pro-coup officers, he told the court that he would gladly accept a death sentence if it is handed down to him by the court.

"I won't be a crybaby. I was in a coup and followed orders," Seymen told the court.

Sgt. Zekeriya Kuzu, who was the first among the team of assassins to confess his ties to FETÖ, backtracked on his initial testimony and denied his link to the group. He claimed he faked the list of FETÖ suspects that he gave the police after he was arrested. Kuzu was the man looking desperately at the soldiers who captured him in an iconic photo where would-be assassins were caught in a culvert.

Kuzu said in his first testimony that he was a member of FETÖ and other members in his team were also loyal to the "Hizmet" (Service), a name FETÖ members use to describe their movement. On Tuesday's hearing, however, Kuzu said he concocted his ties to FETÖ where he was allegedly called "pasha" for his influence over his superiors thanks to his links to the cult.

He claimed he was "threatened" while he was in detention and forced to admit he was a member of FETÖ. Like Sönmezateş, he portrayed himself as "a patriot" although Sönmezateş, in a fit of rage, shouted at the defendant not to speak on behalf of him when the latter "thanked" the court for "handling the case well."

On his links to FETÖ, Kuzu claimed that he only knew a man working at a FETÖ school his son was attending. However, the man that Kuzu is referring to is believed to be a point man for FETÖ who gives instructions to members in lower ranks.

He said he gave the names of 57 military officers as FETÖ members "out of fear" after he was "threatened" while in detention.

The trial against the suspected assassins is one of the most significant trials against the pro-coup troops and draws much public attention, with occasional protests against the defendants outside the courtroom.

Hearings will continue until Friday and after a break over the weekend they will resume next Tuesday. The court expects to wrap up what it calls the "first stage" on March 15 and start the next leg in April.

The indictment against the soldiers says Fetullah Gülen, the elusive FETÖ leader, personally approved the plan to capture or assassinate Erdoğan during the putsch attempt, like he did for other coup plans. He is also believed to have ordered the captures of strategic locations, from the presidential palace to the army's headquarters.

Gülen is the prime suspect in the coup case and he faces life imprisonment. However, like in several other cases where he faces terror charges, Gülen has abstained from attending. He currently resides in Pennsylvania, and Turkey is seeking his extradition from the U.S.

Dressed to kill: Call for jumpsuits for dapper suspects

They are more accustomed to military fatigues than well-ironed suits but when they appeared at their first hearing wearing exactly those, with cool haircuts to match, pro-coup troops sparked outrage in the country.

After all, these men are accused of attempting to kill the elected president and they are currently among most hated figures in the country. Social media was awash with comments condemning the dapper looks of the officers, from a sergeant to a general who oversaw the mission to kill the president on behalf of the coup's masterminds.

As their photos in chic suits and eloquent haircuts splashed the front pages of newspapers nationwide, one Turkish daily took issue with the "good-looking" defendants and called on the authorities to issue "uniforms," preferably orange like prisoner jumpsuits in other countries, for the defendants in such high-profile cases.

Soon, social media users joined the call and urged Justice Minister Bekir Bozdağ to mandate the defendants to wear overalls. Bozdağ and other high-ranking officials did not comment on the issue.

Soldiers who tried to kill the president were captured hiding in a forest near Marmaris, where the president's hotel was located, just days after the coup bid. Looking worse for wear, they were handed T-shirts and shorts as they were taken into custody. Though they had lost a good deal of weight during their run from justice, they have evidently regained some weight since then.

Most of the pro-coup troops who were captured during the putsch bid were photographed in bruises and in tattered clothes at police stations. Authorities have said their appearances were because of scuffles during their arrests.

In their trials, which began last year, the defendants dressed sharply. Unlike the United States and other countries, Turkey does not have jumpsuits or uniforms exclusive to prisoners or defendants and under a controversial interpretation of law, judges sometimes reduce sentences in cases where the defendant dresses in a suit and observes "good manners towards judges" during the hearings.