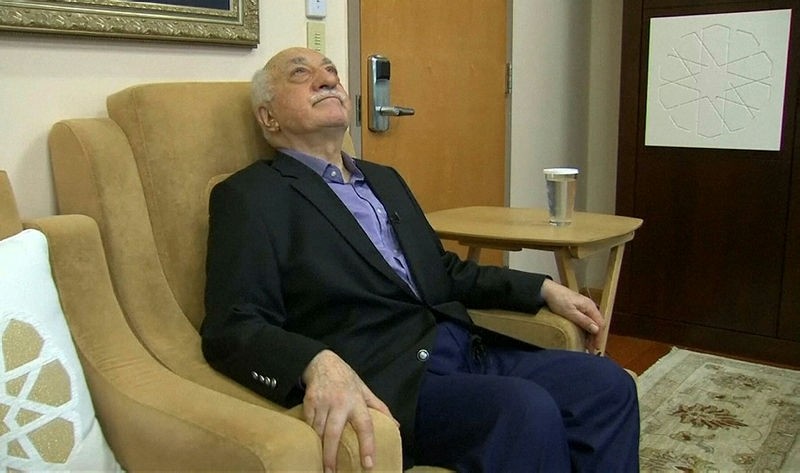 FETu00d6, run by Pennsylvania resident Fetullah Gu00fclen (L), is known for intimate links to the Clinton's campaign as they feared a Trump win would jeopardize their presence in the United States.
by Daily Sabah Apr 05, 2017 12:00 am

A charity linked to FETÖ, the terrorist group behind last year's coup attempt, is accused of diverting donations collected from the unsuspecting public to fund the presidential campaign of Hillary Clinton, in a bid to save FETÖ's U.S.-based leader Fetullah Gülen from prosecution

Fresh raids against the staff of the now-defunct Kimse Yok Mu (Is Anybody There?) charity run by members of the Gülenist Terror Group (FETÖ) unearthed new allegations against the terrorist group, which is accused of masterminding the July 15 coup attempt last year.

The Kimse Yok Mu charity is accused of diverting contributions it received from the public to another donation campaign: For the presidential candidacy of former U.S. Secretary of State Hillary Clinton.

Habertürk news reported that the charity transferred donations of $5,000 and $10,000 in multiple instances for the Democrat's presidential contender, Hillary Clinton, who suffered a crushing defeat to Donald Trump in the latest U.S. elections.

Turkish media outlets reported that donations were part of a scheme by FETÖ to escape prosecution in the United States where it controls a network of schools, companies and where its leader Fetullah Gülen, a retired preacher who settled in the United States in 1999, resides.

The charity has long been subject of criminal investigations in Turkey for its links to FETÖ and after the coup attempt that left 248 people dead. It was closed down, like other FETÖ-linked institutions, by a state of emergency decree.

As part of an investigation by the Chief Prosecutor's Office in Istanbul, 32 suspects linked to the charity were detained on Monday in nationwide police operations across Turkey.

Starting from 2014, one year after FETÖ emerged as a national threat bent on toppling the government, Kimse Yok Mu branched out its activities in the Netherlands and some other European countries.

Under the name of Kimse Yok Mu International, the so-called charity continued collecting donations amounting to millions of Turkish liras and used it in funding the terrorist group, prosecutors say.

Last year, 121 suspects were detained after an investigation of the charity and charged with membership of a terrorist group and money laundering.

The terror cult accumulated significant wealth thanks to funding by supporters and some 5,000 companies in Turkey are believed to be directly linked to the group.

In operations during the wake of the July 15 putsch attempt, authorities seized the assets of 60 businesspeople funding the terror cult. Other companies also face legal probes and fines while their owners and executives are being detained on charges of FETÖ membership.

Once wielding significant clout in almost all institutions, from judiciary to law enforcement through infiltrators loyal to them, the cult is now subject to a massive crackdown by the government in efforts to weed out the cult's followers from government and nongovernmental institutions.

The terror cult is accused of gaining financial power by extorting money from businesspeople through blackmail under the guise of "himmet," the technical name used for the fundraising meetings to collect donations for educational institutions operated by the movement.

It also runs a global network of schools and associations on almost all continents and relies on funding from supporters for its activities.

Turkey seeks the extradition of Fetullah Gülen from Washington for multiple charges, ranging from the coup attempts to masterminding sham trials, forgery, money laundering, blackmail and illegal wiretapping using infiltrators of the cult within police, judiciary, bureaucracy and army.

Meanwhile, Donald Trump's harsh rhetoric against migrants and his anti-terror stance has worried Gülenists who benefit from state grants to dozens of FETÖ-run charter schools in the United States.

The terror cult had openly supported Clinton against Trump in the 2016 presidential race and experts say they were genuinely bothered when Trump took office earlier this year.

Ankara had recently announced that Gülen was planning to flee the United States to another country fearing that the Trump administration would extradite him.

Kaine was also a speaker at the Gülen-linked American Turkish Friendship Association (ATFA) in 2013 and in 2015, he attended the annual convention of the Turkic American Alliance (TAA), Gülen's business arm whose main purpose is allegedly to influence congressmen.

Moreover, Kaine had sent a congratulatory letter to the Washington-based Rumi Forum on Nov. 20, whose honorary chairman is Fetullah Gülen.
Last Update: Apr 05, 2017 10:23 am
RELATED TOPICS