Pilot who killed 15 confesses he was handpicked by FETÖ 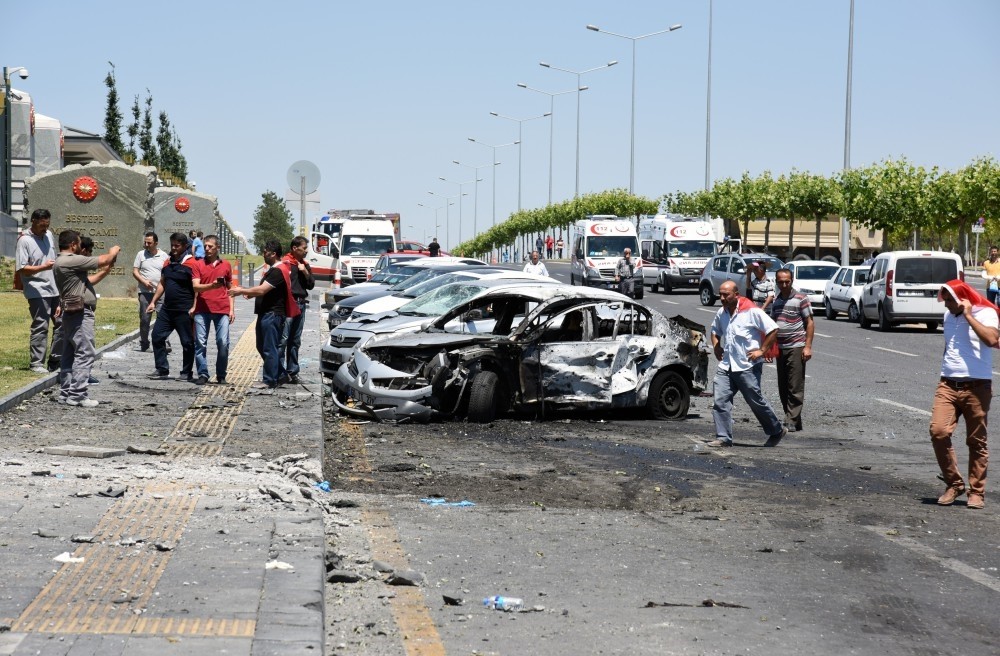 People inspect cars destroyed when Mu00fcslim Macit and other pilots dropped bombs on a street near the presidential palace, on civilians rushing to protect the building from coup plotters.
by Daily Sabah with AA Apr 07, 2017 12:00 am

A jet fighter pilot, who killed 15 people when he dropped multiple bombs in Ankara during the July 15 coup attempt, confessed that he and other pilots were specifically picked by coup plotters loyal to FETÖ for the mission because of their past links to the terrorist group, which had infiltrators in the army

More evidence has surfaced on the Gülenist Terror Group's (FETÖ) role in a deadly coup attempt that took place in Turkey on July 15, 2016.

Müslim Macit, a first lieutenant who was serving as a jet fighter pilot when he dropped multiple bombs near the Presidential Palace in the capital Ankara, killing 15 people, confessed his ties to the terrorist group.

Macit explained how he and others were handpicked by coup plotters who had ties to FETÖ.

Macit, is among suspects in an indictment against pro-coup troops at Akıncı, the military base in the capital Ankara that was used by coup plotters as their command center.

It was from that base the fighter jets took off and fired at large crowds that had gathered to stand against the coup and at strategic locations across the city.

The jet fighter pilot's testimony in the indictment shows that he decided to collaborate with investigators in exchange for a reduction in his sentence.

He named Maj. Fatih Çavur as the pro-coup officer who had instructed him to join the putsch bid that left 248 people dead across the country.

Macit and two other pilots were summoned by Çavur two days before the coup attempt for a meeting where they were informed about "a secret operation."

"He told us only a few people in the (Akıncı) base were aware of the operation. He said we had to join 'the operation for the sake of the country'," Macit explained.

"Çavur told us the state of the country was not good and we had to carry out this operation. Me and the other two pilots were chosen because Çavur told us that he was aware that we were visitors to 'light houses'," he said, referring to informal dormitories run by FETÖ where both students and members of the terror cult resided.

Maj. Çavur was arrested following the coup attempt, which was quelled thanks to a strong resistance by the public, anti-coup police and soldiers.

Macit said the major told them "a different operation" would be held at the base on July 15 and "other military units" would join them.

"You were trained for this and it is time to pay us back," Çavur had told the three pilots, according to Macit.

An indictment on what happened at Akıncı, a military base in the capital Ankara that was used as a command center by pro-coup troops during the July 15 coup attempt, was released last week.

The indictment says Fetullah Gülen, the leader of the FETÖ, would settle in a building in the base if the coup, blamed on his terrorist group, succeeded.

It also shed light on key figures of the coup and the names Adil Öksüz and Kemal Batmaz as two point men of Gülen who executed the coup with the aid of Akın Öztürk, a former general accused of coordinating coup efforts.

Gülen is the prime suspect in the indictment in which 481 defendants are included as suspects, but it is Öksüz, a theology lecturer who turned out to be Gülen's lieutenant for the execution of the foiled coup bid, who has drawn the attention of prosecutors.

Öksüz is the only man who disappeared after the coup attempt, while Gülen lives in Pennsylvania in the United States; Kemal Batmaz, another "civilian" Gülenist who accompanied Öksüz, was jailed after the coup.

Akın Öztürk was also jailed and was among the hundreds of military officers convicted of the coup charges. Öksüz remains at large after his controversial release that followed his capture at the Akıncı base.

Gülen denies links to the coup, but evidence that surfaced after the putsch was quelled shows he actually gave his approval for the plot to seize power.

Apart from Müslim Macit, prosecutors named each jet fighter pilot responsible for the killing of civilians during the coup bid.

Officers Ertan Koral and Mehmet Çetin Kaplan are accused of killing seven people during the bombing of an aerial unit headquarters of the Turkish National Police.

Hüseyin Türk and Uğur Uzunoğlu are accused of flying the fighter jets that dropped bombs at the Special Operations headquarters of the police, killing 44 people.

In total, 68 people were killed by fighter jet airstrikes that took off from Akıncı, while nine civilians opposing the coup that tried to block the entrance of the military base were also shot dead by pro-coup troops.

Gülen is already implicated in a string of coup-related trials as the prime suspect, but the retired preacher, whose Hizmet movement evolved into a terror cult, planned to return to Turkey from his self-imposed exile, the indictment shows.

Like Iran's Ayatollah Khomeini, Gülen, who posed as a man promoting religious teachings, would return home if the coup succeeded, and for his return, the coup plotters even prepared a building inside the Akıncı base.

Gülen currently resides in a Pennsylvania retreat owned by a foundation linked to his terror cult, and Turkey is seeking his extradition from the United States. Like others involved in the coup attempt, Gülen faces multiple life sentences.

Critics of FETÖ say Gülen has always tried to wield power in Turkey, and since his rise to prominence in the 1970s as an influential preacher, he plotted to have followers infiltrate law enforcement, the judiciary, the military and the bureaucracy.

Sermons given by Gülen in the 1990s, hint at his ambitions to seize power. He had instructed his followers to infiltrate the "veins of the state," and wait for the right time for complete takeover.

FETÖ is accused of running a campaign of massive infiltration into the army for decades, and its members managed to disguise themselves for years according to the prosecutors.

The coup attempt was actually "premature" another indictment says as FETÖ members had planned it for a later date but rushed when the state decided to dismiss those suspected of having links to FETÖ in the army during a meeting of the Military Council in August 2016.
RELATED TOPICS