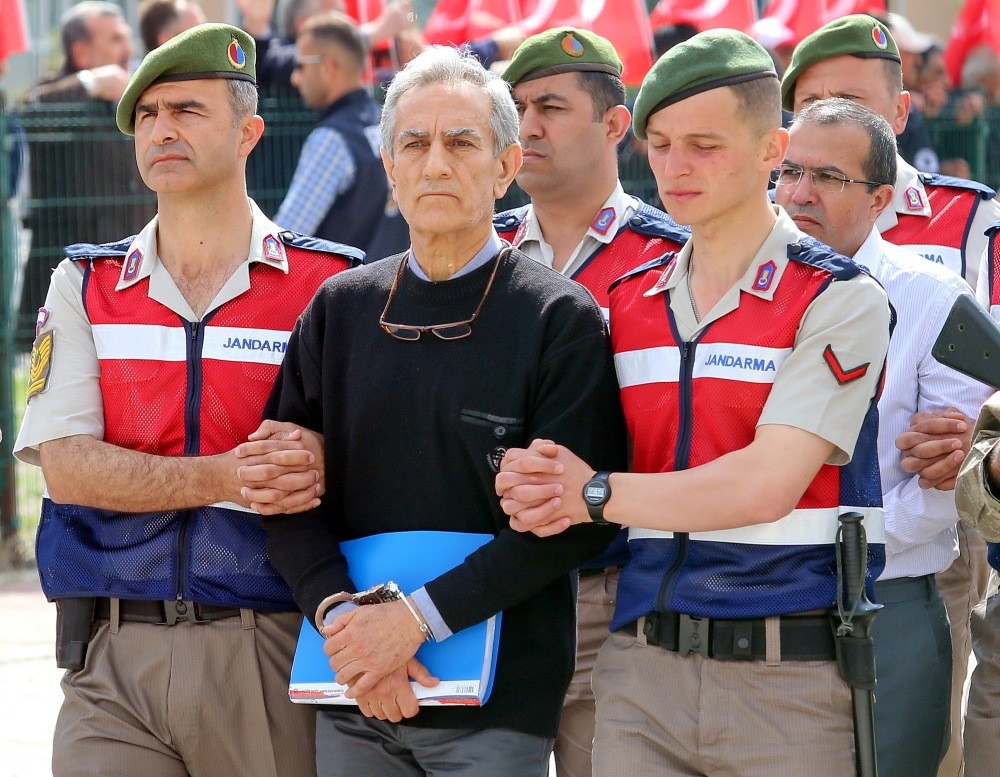 Aku0131n u00d6ztu00fcrk, former Air Forces commander accused of commanding the putschists, was escorted to the courtroom by gendarmerie troops.
by Daily Sabah with AA May 22, 2017 12:00 am

The trial of the main suspects in the July 15 coup attempt, perpetrated by FETÖ, opened Monday in Ankara. Generals who conducted the coup were brought to the courthouse amid cries of outrage and grief from the families of coup victims

Instigators of a coup attempt on July 15, 2016, which left 250 people dead, appeared before a court on Monday in the capital of Ankara for the first hearings of their trials. The defendants are mostly military officers who executed and commanded the coup bid, which was masterminded by the Gülenist Terror Group (FETÖ). The trial will focus on the takeover of the Chief of General Staff's office in Ankara during the coup attempt. All but 12 of the suspects are members of the military, including a general, three lieutenant generals, four major generals, 16 brigadier generals and three rear admirals.

Dressed casually, unlike defendants in other coup-related lawsuits who donned elegant suits, Gen. Akın Öztürk, the former commander of the Air Forces, led the other defendants as they were accompanied to the courtroom among a formation of security guards carrying rifles. 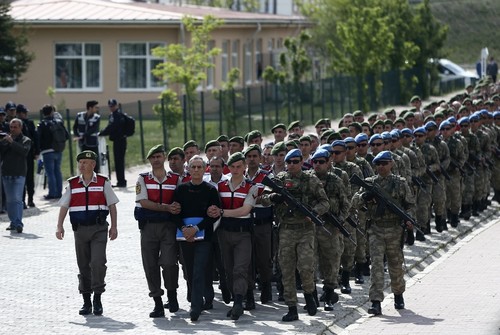 Gendarmerie escort defendant Akın Özturk who was involved in the attempted coup, ahead of his trial in Ankara Monday.

The first day of the trial, which is expected to be composed of hearings up until June, started with the routine procedure of identity examination.

Ex-Gen. Öztürk, who is accused of commanding the coup attempt, told judges he "did not remember" his home address.

As the hearing commenced, tensions and sentiments were running high inside the courtroom as families of coup victims and lawyers for the defendants engaged in a verbal argument.

Saliha Arıgan, mother of Mucip Arıgan, a civilian who was killed by putschists who opened fire on an anti-coup crowd outside army headquarters, fainted during the heated exchange.

"They should have been bound by shackles," the weeping mother said as she was taken outside the courtroom.

There were heavy security measures outside and inside the court located inside a sprawling prison complex where defendants are held, with around 500 security personnel deployed in the area.

Among the 221 defendants is the U.S. based Fetullah Gülen, who will be tried in absentia. Gülen, who is the leader of FETÖ, faces multiple life sentences in this trial and a number of others which are being held in other cities.

Those present for the opening day of the trial were members of the so-called "Peace at Home Council," which was a committee established by coup plotters to replace the government if the putsch had succeeded.

Akın Öztürk was first to present his defense. Öztürk denies he took part in the coup and told judges he was not aware of a coup until he saw it on the news. "Let it be known by all that I never contributed to this treacherous attempt," Öztürk said. In his first testimony to police after his capture, Öztürk claimed he was at the Akıncı base commanded by putschists simply by coincidence. "I am not a man who will point my gun to my fellow officers, to our citizens. In my career, I faced death many times. I wish I died than rather be here in court," he said.

Along with Akın Öztürk, Mehmet Partigöç, a brigadier general who held a senior post in the office of the Chief of General Staff during the coup, is an important defendant.

The indictment, accepted by the 17th Heavy Penal Court in Ankara on March 8, outlined the "attempt to overthrow the democratic constitutional order by FETÖ members with 35 planes, 37 helicopters, 246 armored vehicles and around 4,000 light weapons."

It detailed how the putschists targeted Parliament, the presidential palace and other institutions such as police headquarters and a satellite company.

President Erdoğan is listed as a complainant in the case while Chief of General Staff Gen. Akar, who was captured and held hostage on the night of the coup attempt in a military base commanded by putschists, was listed among the "soldiers who were victims."