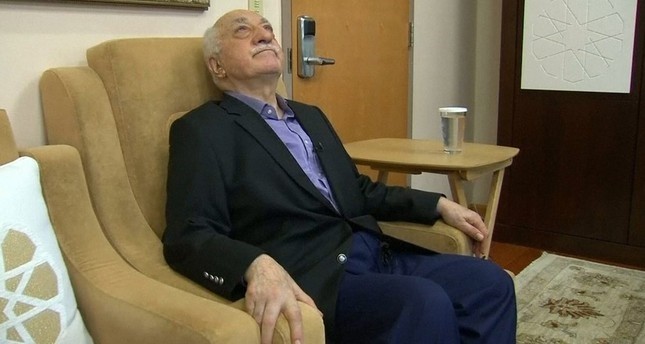 Fetullah Gu00fclen is accused of orchestrating the coup attempt with his subordinates who handled FETu00d6u2019s infiltrators of the military.
by Daily Sabah Jul 11, 2017 12:00 am

The latest trial on the Gülenist Terror Group (FETÖ) and its infiltrators in the army started in the capital Ankara Monday. The so-called secret "imams" of the terrorist group — people who acted as handlers and superiors of the group's infiltrators in the army — appeared before the 16th High Criminal Court under tight security measures inside a sprawling prison complex in the Sincan district. Seventy-six suspects are accused of running a network of FETÖ infiltrators in the army's Air Forces. Eighty-one military personnel that had contacts are also being tried in the same trial.

The suspects face life imprisonment and lesser charges for terrorism for last year's coup bid that killed 250 people. The lawyers for the defendants asked the judges to close the court to the press but the court rejected, citing that the trial did not involve anything endangering public security.

Murat Kara, a physics teacher who used the alias "Selim Muhsin" as a senior figure among FETÖ's point men, is accused of commanding pro-FETÖ troops in Akıncı, a major military base in Ankara that acted as command center for the putschists during the July 15 coup attempt last year. The indictment also details how FETÖ members infiltrated the army by enrolling in military schools upon the instruction of senior members of the terrorist group. According to the prosecutors, each military personnel loyal to the group was "groomed" in the "Houses of Light," an informal name for FETÖ's dormitories for students.

The prosecutors also accuse the defendants of "expelling" non-FETÖ members in the army by employing shady tactics. Any military personnel deemed an obstacle for the group's infiltration faced lawsuits orchestrated by FETÖ's infiltrators in the military judiciary and civil judiciary. When this failed, the terrorist group's infiltrators in the army, who retained high ranks, resorted to "unfair" disciplinary action for its opponents. In some cases, FETÖ critics were blackmailed and forced to either resign from the army or bow down to the demands of the terrorist group, the prosecutors say in the indictment. "FETÖ started recruiting members while they were still in middle schools and directed them to study at military schools. They picked intelligent, hardworking and poor children as recruits. Those children were offered a chance to study at the 'Houses of Light' where they were brainwashed by the group's ideology," the indictment points out. The indictment says FETÖ monitored the lives of new recruits through "brothers" point men for younger recruits.

The terrorist group's "imams" have been under the spotlight after the coup attempt and security forces managed to uncover most of the network of imams thanks to confessions by former FETÖ members and by deciphering an encrypted messaging app used by the group's members. Recently, the "imams" commanding police officers were captured in nationwide operations.

The trial has attracted great media attention as it was an Air Force "imam" who allegedly masterminded the coup attempt. That imam, Adil Öksüz, originally a theology lecturer, was captured at Akıncı base during the coup bid. He remains at large after a court controversially ordered his release shortly after the putsch was foiled. He is one of the most wanted men for the attempt, along with Fetullah Gülen, the group's leader who resides in Pennsylvania, U.S.

FETÖ is known for its widespread infiltration of law enforcement agencies, the judiciary, the military and bureaucracy. The group's complex hierarchy has long helped its members to avoid detection.

Recent investigations have revealed that the cult had assigned unlikely members to lead a large group of infiltrators in the military and police force, namely, people in ordinary positions that would not attract attention such as primary school teachers and even shopkeepers. Thanks to FETÖ's widespread influence in the positions of law enforcement, the terror group has managed to carry out raids against its critics, imprison them on false charges and fabricate evidence, even wiretapping thousands of people, criminal inquiries have revealed.

The terrorist group openly started a campaign to seize power in Turkey in 2013 when police chiefs and prosecutors linked to the group carried out two attempts to topple the government by implicating ministers in investigations based on forged evidence. When Ankara moved to contain the Gülenist threat, the terrorist group activated its infiltrators in the Turkish Armed Forces (TSK) and tried to topple the government once again last summer but strong public resistance helped Turkey to quell the attempt.

Turkey seeks Gülen's extradition from the United States, where he has lived in self-imposed exile since 1999. The terrorist leader faces life imprisonment in multiple cases related to the coup attempt and other wrongdoings.