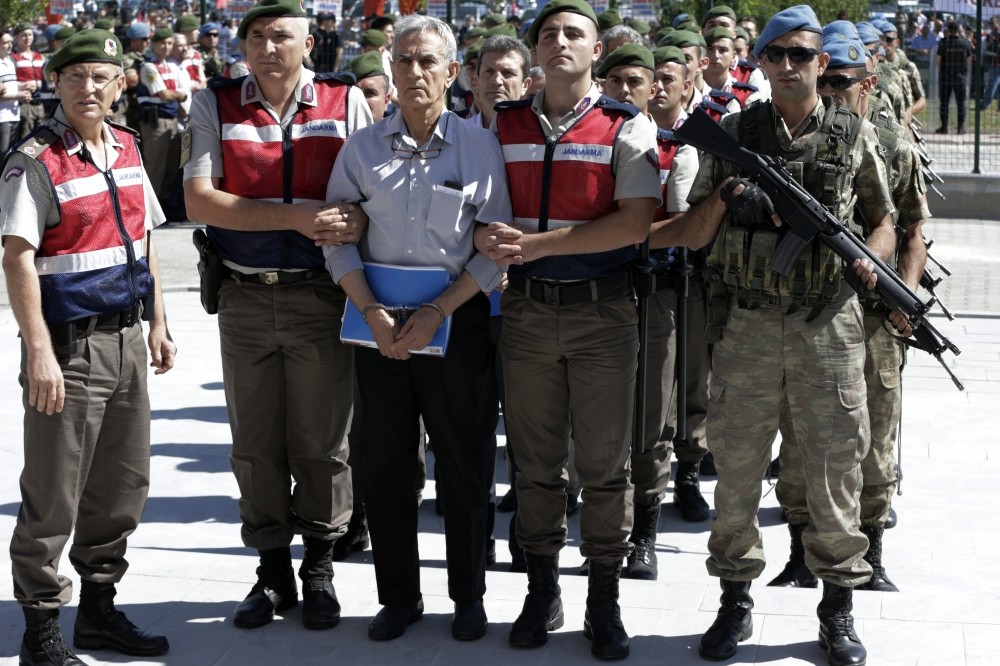 Akın Öztürk, the former general accused of leading the July 15, 2016, coup attempt blamed on FETÖ on denied his role in the bid and claimed he wore ‘an ill-fitting uniform' at the base he was caught at to convince the coup plotters he described as FETÖ members backed by foreign powers to give up

Akın Öztürk, the former Air Forces commander who is accused of commanding the pro-coup troops during the bloody attempt to seize power on July 15, 2016, testified in the main trial into the attempt in the capital Ankara yesterday. Öztürk, who was caught in Akıncı, the military base where the coup bid was organized, said he was there to convince putschists to end the attempt and that he had "an ill-fitting uniform" at the base and he came in plain clothes for that reason. He said the coup attempt was the work of the Gülenist Terror Group (FETÖ) and was endorsed by "foreign powers" that he avoided openly naming.

The former general, who retired before the coup attempt but was serving as a member of a military council, was among the suspicious figures caught in the Akıncı base where fighter jets took off to strike strategic locations in the capital. Indeed, he is among 486 defendants, including senior FETÖ names who were caught red-handed while commanding the troops in the base. Öztürk's son-in-law Hakan Karakuş, a fighter jet pilot, has also been jailed for joining the coup attempt with airstrikes targeting civilians. He presented his defense last Friday and was questioned by judges and the plaintiffs' lawyers in yesterday's hearing in a courtroom in a high-security prison complex in the capital's Sincan district.

Öztürk said he "found out" that a coup was underway when he met Chief of General Staff Hulusi Akar when the latter was abducted from his office and brought to Akıncı by coup plotters. Öztürk had said in his initial testimony to investigators when he was detained that he visited the base to "see his grandchildren" who stay in the lodgings inside Akıncı.

The defendant claimed he tried to persuade pro-coup generals to stop the attempt upon the instruction of Hulusi Akar. He could not explain why he was allowed to walk freely inside the base while Akar and other anti-coup generals were held in detention. He claimed putschists did not see him as a threat.

Öztürk is accused of leading the Peace At Home Council, a 38-member committee of putschists. He earlier claimed he never attended four days of meetings with other putschist officers to plan the coup.

Since coup trials began in Turkey last year, hundreds of officers, from lieutenants to generals, have been put on trial for the putsch bid. Almost every defendant has denied their links to FETÖ despite evidence showing close ties between putschists and the terrorist group. Prosecutors say Fetullah Gülen, the U.S.-based leader of the group, ordered the plan to seize power through the group's infiltrators in the army, from non-commissioned officers to high-ranking generals. Adil Öksüz, a theology lecturer who served as Gülen's point man, arranged the coup plot according to prosecutors who say Öksüz and generals held meetings in an Ankara villa to discuss the details of the plot. Öksüz remains at large but Kemal Batmaz, Harun Biniş, Hakan Çiçek and Nurettin Oruç, other "civilian" FETÖ members who aided in the coup attempt, are among defendants in the Akıncı trial after they were captured in the base on July 15, 2016. Öksüz is among the few suspects who disappeared after the coup attempt after he was controversially released hours after his detention at Akıncı.

In related news, a court accepted a new indictment yesterday against 92 suspects linked to the coup attempt.

Eighty-five of the suspects - 73 gendarmes and 12 civilians - face life sentences while seven other civilians could be jailed for 22-and-a-half years if convicted.

Among the accused gendarmes was Gürcan Sercan, the commander of Istanbul's Provincial Gendarmerie Command at the time of the attempted coup.

The 19 civilians are said to have been FETÖ "imams" who led suspected FETÖ members in the gendarmerie.

The 841-page indictment prepared by Istanbul Counterterrorism and Organized Crime Prosecutor Can Tuncay was sent to the city's 29th High Criminal Court. It called for three aggravated life terms for 85 suspects charged with attempting to overthrow the constitutional order. Those facing the lesser sentences are charged with membership of an armed terrorist organization.

The first hearing is due to be held on Dec. 25 at a court in Istanbul's Silivri district.

The same court also accepted an indictment against 61 suspects accused of killing three people and injuring 49 others on Istanbul's Fatih Sultan Mehmet Bridge on the night of the coup bid.

Both of Istanbul's bridges across the Bosporus were closed by pro-coup soldiers, who opened fire on people who came out to protest against the attempted takeover.

Prosecutors called for aggravated life terms for the 61 defendants on charges relating to the killings. The first hearing will be held on Oct. 16 in Silivri.