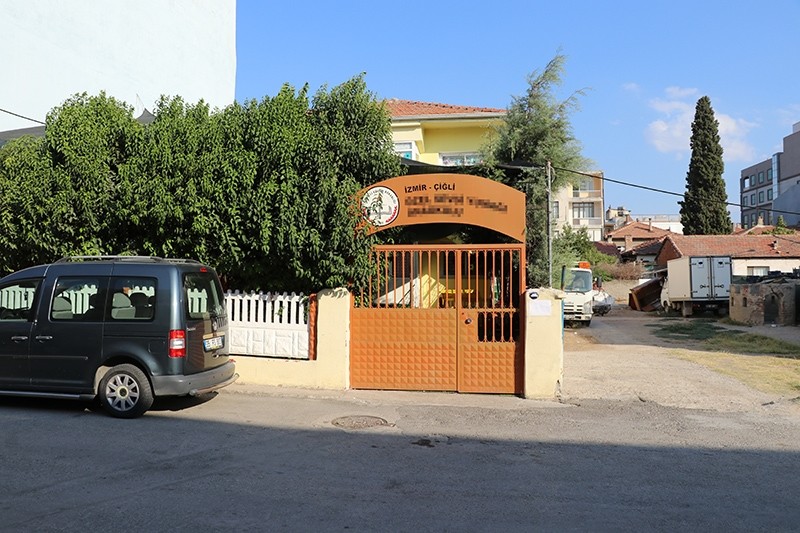 This photo shows a front view of the kindergarten Alperen Sakin, who died of suffocation after being trapped in a school shuttle, was going to in u00c7iu011fli district, Izmir, Turkey. (IHA Photo)
by Daily Sabah Aug 17, 2017 12:00 am

A three-year-old boy has died of suffocation after falling asleep and being forgotten in a school shuttle in Turkey's western Izmir province, local media reported Thursday.

According to the boy's father Serkan Sakin, three-year-old Alperen left home to go to school via shuttle at 7:30 a.m. when he fell asleep on the way and was left trapped inside the vehicle. Kindergarten employees realized that he was missing only at 4:30 p.m., after which they found the boy unconscious.

Sakin said that the kindergarten initially lied about forgetting his son in the shuttle, claiming that Alperen was put into bed for a nap, but did not wake up for dinner at 5:00 p.m. The kindergarten employees only told the truth after being pressured by the police.

After being brought to a hospital, doctors said Alperen, who spent hours inside a closed airless vehicle during a very hot summer day, died of suffocation. The temperature in Izmir reached 36 degrees Celsius (97 degrees Fahrenheit) Thursday.

Izmir's Chamber of Bus Drivers and Public Service Vehicle Operators opened an investigation regarding the vehicle in which Alperen suffocated after media outlets began reporting the incident.

"In the preliminary investigation we conducted, we found that the vehicle did not receive any certification from any institution. Unfortunately, it does not have any of the qualities a service vehicle must have," the chamber's head Hasan Basri Bostancı said.

The vehicle's driver and mentor responsible for Alperen were detained by police and are suspected of negligence leading to toddler's death.