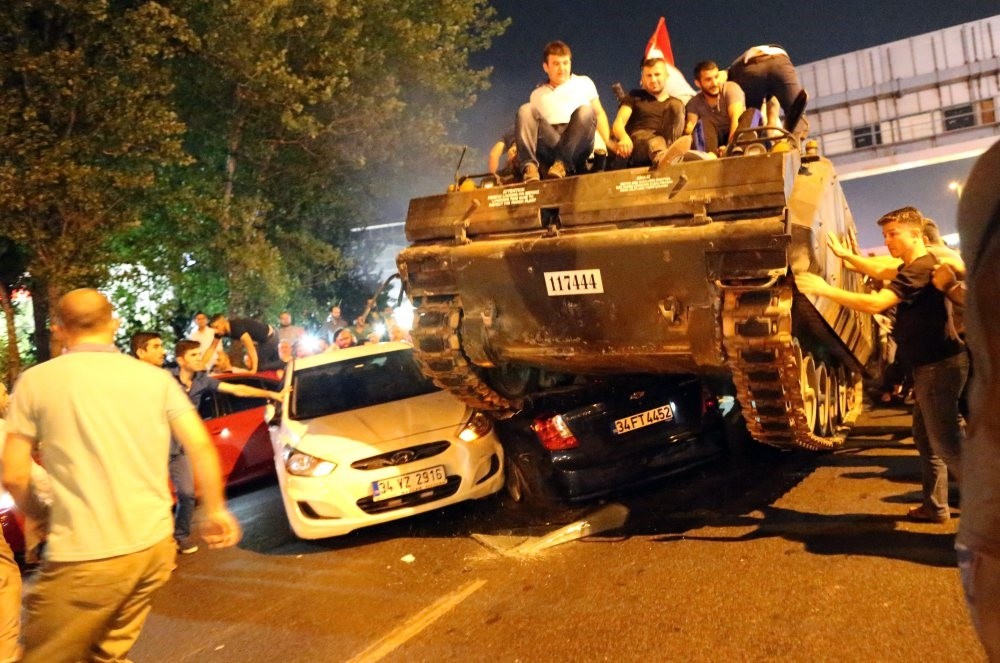 Civilians on a tank captured from putschists in Istanbul on July 15, 2016. Pro-coup troops crushed cars blocking the road in their attempts to take over the city.
by Daily Sabah Sep 23, 2017 12:00 am

A new indictment in the July 15, 2016 coup attempt blamed on FETÖ's army infiltrators, asks for life sentences for 118 pro-coup soldiers who tried to take over Istanbul and abduct a former prime minister

An indictment against 118 pro-coup soldiers concluded Friday and prosecutors ask for multiple life sentences for their involvement in the July 15, 2016 coup attempt that left 249 people dead. The defendants were stationed at the 66th Mechanized Infantry Brigade in Istanbul and played a major role in the attempt to take over Turkey's most populated city Istanbul, according to prosecutors. The defendants are accused of killing four people, including the highest ranking military officer killed in the coup attempt, Colonel Sait Ertürk.

According to the indictment, the defendants tried to take over the A Haber TV station, a sister company of Daily Sabah, and kidnap Turkey's former prime minister Ahmet Davutoğlu.

The coup attempt is linked to members of the Gülenist Terror Group (FETÖ) who had infiltrated the Turkish Armed Forces (TSK). Led by U.S.-based Fetullah Gülen, FETÖ instructed its infiltrators by communicating via "imams" (civilian point men) who instructed putschists to seize power and kill or capture the country's leaders on July 15, 2016, the investigation revealed.

The public became aware that a nationwide coup was underway when now-iconic images of soldiers on the major bridge connecting Istanbul's Asian and European sides flashed on TV screens. Soldiers from the 66th Mechanized Infantry Brigade located in the Esenler district of Istanbul are accused of coordinating the putschists'"European-side operations." Four defendants remain at large while 55 have been jailed and the rest were released earlier pending trial. In addition to facing life sentences, the defendants face up to 15 years in prison for lesser charges.

The indictment includes evidence regarding the meetings of pro-coup troops at the military base in Esenler district ahead of the coup, held with the purpose of planning actions to take over the city of Istanbul. Prosecutors say a large cache of munitions for tanks and rifles were brought onto the base before the coup attempt. Pro-coup troops also killed police officers trying to thwart their attempt and injured dozens, including Col. Davut Ala, who accompanied Sait Ertürk as the duo tried to convince coup plotters to surrender and clashed with them when putschists refused to lay down arms.

According to the indictment, soldiers and tanks left the military base and scattered themselves across the city. A military unit was sent to the A Haber TV station, where the country's leaders phoned in to warn the public about the ongoing coup on July 15, 2016. The putschists failed to capture the TV station and headquarters of its parent company, Turkuvaz Media Group, as an anti-coup crowd consisting of unarmed civilians, confronted them. The strong public resistance ultimately forced the putschists to surrender. Mobilized by President Recep Tayyip Erdoğan, crowds of civilians blocked the routes of putschists and later, anti-coup police and military officers captured the pro-coup troops.

The actions of putschist troops operating from the military base in Esenler included the dispatching of a helicopter full of soldiers to Istanbul police headquarters during the coup bid. One person was killed and three others were wounded when those aboard the helicopter fired on the crowd trying to prevent their from landing at the headquarters.

The indictment also says that the coup plotters planned to kidnap politicians, top bureaucrats and businesspeople in Istanbul. Captain Özkan Özgenç who is among the defendants, confessed that they dispatched soldiers to the residence of former Prime Minister Ahmet Davutoğlu in Bahçelievler. Davutoğlu and others escaped the abduction attempts.

Coup trials in Turkey started last year and hundreds of officers, from lieutenants to generals, are being tried for the coup attempt. So far, only a few defendants have acknowledged their links to FETÖ despite evidence showing their meetings with the group's members. Gülenists had been infiltrating the army, law enforcement, judiciary and bureaucracy for decades, prosecutors say, before moving to seize power in two coup attempts in 2013 through their infiltrators in the judiciary and police and, finally, by infiltrators in the army.

In a trial in the northwestern city of Kocaeli on Friday, a court heard the testimony of a former aide to an admiral who led the coup attempt at a key naval base. İsmet Coşkun, who accompanied Admiral Hayrettin İmren throughout the coup attempt, claims he is innocent, saying he was forced to follow the orders of İmren, who he described as "unbalanced," on July 15. "He told me that martial law was declared in Turkey and we should arrest other admirals. He told me that we were ordered to shoot anyone who opposed martial law," Coşkun told the court where he is being tried along with İmren and 89 other defendants. He claimed that İmren locked up officers who opposed martial law and described him as "very angry." He added that the admiral also waved his pistol toward a crowd of civilians gathered outside the base to persuade them to end the coup attempt but İmren reacted. Then, other pro-coup troops opened fire into the air to disperse the crowd. "He was crazy that night. He put his gun to the head of an officer who refused to give him the keys to the armory. I convinced him to have that officer detained. I was scared that he would shoot him," Coşkun told the court, adding that he told others to "tolerate" İmren and follow his orders when the admiral shouted at them.