Coup trials delve into bridge massacre, base at heart of coup 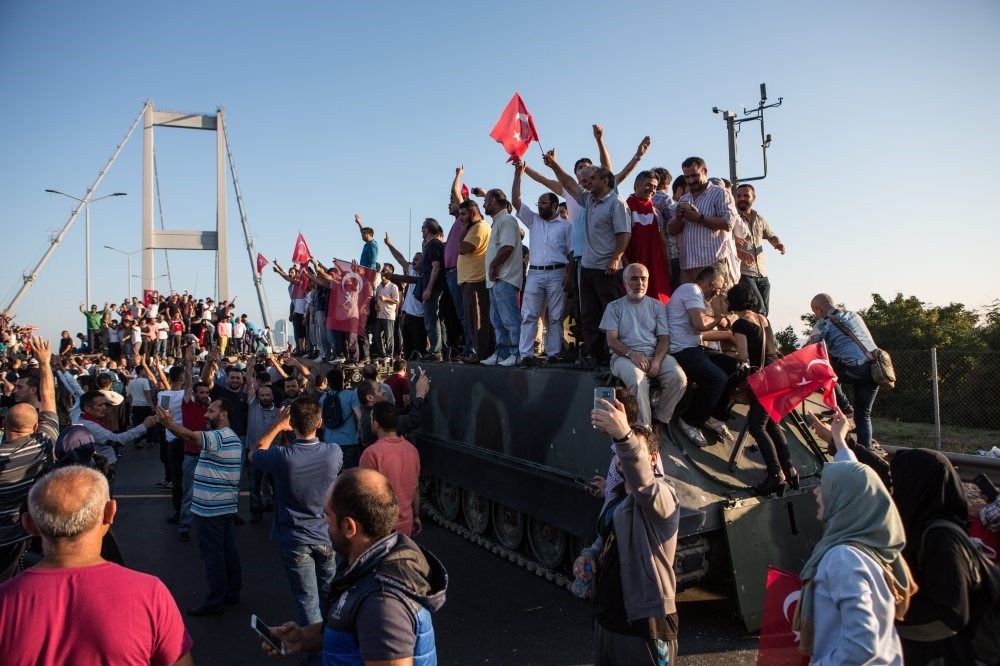 A new week of hearings on the fatal July 15 coup attempt started in Istanbul and Ankara Monday, with dozens set to testify against putschist troops accused of carrying out the attempt on orders from the Gülenist Terror Group (FETÖ). An Istanbul court is trying those involved in the massacre of dozens of innocent civilians on the iconic Bosporus Bridge – now renamed the July 15 Martyrs' Bridge. In Ankara, hundreds of putschist soldiers who commanded the nationwide coup from Akıncı Air Base faced trial. In Silivri, Istanbul, 143 former officers appeared before a court across the street from the main prison complex housing hundreds of FETÖ and coup suspects.

Under tight security, suspects were taken into the courtroom while families of coup victims and non-governmental organizations gathered to protest the coup and watch the hearing.

Defendants were accused of the brutal massacre of 34 people on the Bosporus Bridge during the coup attempt.

The victims, mostly unarmed civilians, and a few police officers, were trying to convince the pro-coup troops to lay down their weapons when the troops opened fire. Victims included Erol Olçok, who was a close friend of President Recep Tayyip Erdoğan, and his 16-year-old son Abdullah Tayyip. 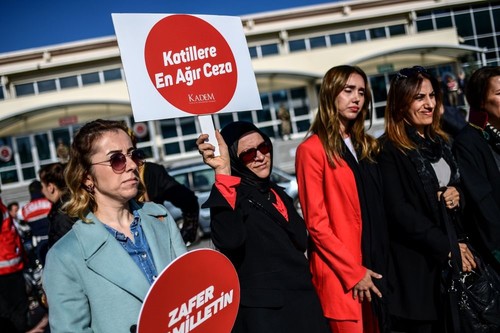 Women from local NGO KADEM hold placards reading: "Heaviest Punishment for the Killers," and "Victory Belongs to the Nation," outside the courthouse in Istanbul where coup plotters are being tried.

Suspects are also accused of a string of crimes, including an attempt to overthrow the constitutional order, membership of a terrorist group and murder. Each defendant faces multiple aggravated life sentences.

The accused suspects fired multiple weapons including rifles and pistols. The putschists also used a tank, which fired four times on a crowd gathered on the bridge, according to prosecutors.

The crowd had gathered on the bridge upon learning that a coup attempt was underway and tried to convince the soldiers to lay down their arms.

According to the indictment, the defendants were dispatched from a military school and a tank division stationed in the city in line with the plan of the coup plotters, who had gathered at the military school days before the coup attempt to plan the takeover of the city.

Images of armed soldiers on the bridge became some of the first mass-publicized images of the coup attempt. As the public questioned the motives of soldiers in videos circulating on television and the internet, the country's leaders addressed the nation and told them that FETÖ was trying to seize power. Soon, crowds poured into streets to confront the putschists and the soldiers on the bridge surrendered eight hours later.

The indictment also claims that the takeover of the bridge took place about one hour after a putschist colonel told his soldiers that "the military assumed control" and ordered them to occupy critical locations. Some two hours after the soldiers took full control of the bridge and its vicinity, a large crowd arrived to confront them. Istanbul Police Chief Mustafa Çalışkan later joined the crowd and one of his bodyguards was among those killed by the soldiers on the bridge. In addition to firing on civilians, the soldiers also clashed with police who intervened. Seven putschists were killed in the shootout.

Family and Social Policies Minister Fatma Betül Sayan Kaya, ruling Justice and Development (AK) Party deputy chairman and spokesman Mahir Ünal and lawmakers from the party were among those who attended the proceedings. Speaking to reporters outside the courthouse, Ünal dismissed any suggestion that the real culprits behind the coup attempt were not being tried. "These people were caught red-handed on July 15, and now they face justice," he said. "We are here to see them account for their crimes before the court. They are subject to trials based on international legal norms and as politicians, we will monitor the trials. The traitors who attacked our nation and sovereignty will be punished accordingly." Nihal Olçok, wife of Erol Olçok was among those watching the hearing. "It was very difficult to be in the same place with [defendants]. I thought I was ready for this moment for months, but I wasn't," an emotional Olçok told reporters.

"Some defendants were named Abdullah. Whenever their names were recited in the hearing, I came to my senses. My son's name healed me there," she said. Olçok said there was "an air of grief" in the courtroom. "Relatives of defendants were grief-stricken too. They are mothers like me after all. Nobody wants their son to die or kill someone. Still, we are very different. They can wave to their sons. I can't," she added. Still, Olçok says she is proud of what her husband and son did during the coup attempt. "They left a legacy of honor and pride for us," she said.

Since the coup was foiled by strong public resistance unprecedented in Turkish history, tens of thousands have been detained or arrested for suspected involvement in the coup attempt.

The first trials started last December, and several high-ranking military officers have already been sentenced to life in prison.

Recently, six officers who led troops attempting to invade the headquarters of Türk Telekom on July 15, 2016, were sentenced to life in prison.

On Oct.4, a group of soldiers who tried to assassinate President Recep Tayyip Erdoğan during the coup attempt was also sentenced to life in a trial in southwestern Turkey.

In Ankara, a new hearing on the main trial on the coup resumed yesterday. The defendants were brought before the judges to testify inside Sincan prison complex, where they are being held.

All defendants were either at Akıncı air base or linked to incidents at the base on July 15, 2016.

Akıncı was the command center of the putschists, with several fighter jets taking off to hit targets in the capital as well as the Presidential Palace complex and Parliament.

The hearings are set to continue until the first week of November, and 486 suspects will testify. The trial started in August, and key figures including a non-military FETÖ operative accused of coordinating the coup attempt and a former Air Force general have already testified.

In yesterday's hearing, Maj. Ersin Eryiğit, commander of an aircraft maintenance unit at the base, presented his defense, claiming he acted to prevent the coup.

"My troops and I were the first to resist the coup while Turkey did not know that a coup was happening," he told the court.

The former major said he became aware of a coup attempt when troops from Land Forces entered the base and he saw soldiers occupying the bridge in Istanbul on TV.

Eryiğit said base commander Hakan Evrim, one of the jailed defendants in the case, had ordered them to load ammunitions to aircraft for a counterterrorism operation that night. He added that he stopped the loading when he found out about the coup attempt around 10:30 p.m. on July 15, 2016.

"I ordered the troops not to load ammunition even if they were forced at gunpoint," he said.

Eryiğit claimed they also did not help the landing of six aircrafts sent by coup plotters from a base in southeastern Turkey and left their unit to disobey the orders of putschist generals.

The defendant also denied allegations that he was linked to FETÖ. In the indictment, Eryiğit is linked to two civilians who acted as his superiors in the terrorist group.

So far, in dozens of coup trials across Turkey, only a few defendants have acknowledged links to FETÖ.

Most defendants have avoided saying FETÖ was behind the coup attempt.

The plaintiffs' lawyers say this is a defense strategy to vindicate them, hoping that FETÖ will liberate them from prison.

FETÖ leader Fetullah Gülen, who currently lives in Pennsylvania, U.S. is the prime suspect in the coup cases and faces life imprisonment.

However, Gülen has not returned to Turkey to attend the trials and Ankara has been actively seeking his extradition from the U.S.

Posing as a religious charity movement, his Hizmet (Service) movement installed followers in the judiciary, police, bureaucracy and military for decades.

In 2013, the group tried to seize power under the guise of graft probes targeting the government by its followers in the judiciary and law enforcement.

Following a crackdown, it moved to seize power again last year in a plot allegedly conceived by Adil Öksüz, a fugitive theology lecturer who acted as Gülen's right-hand man in the coup attempt.