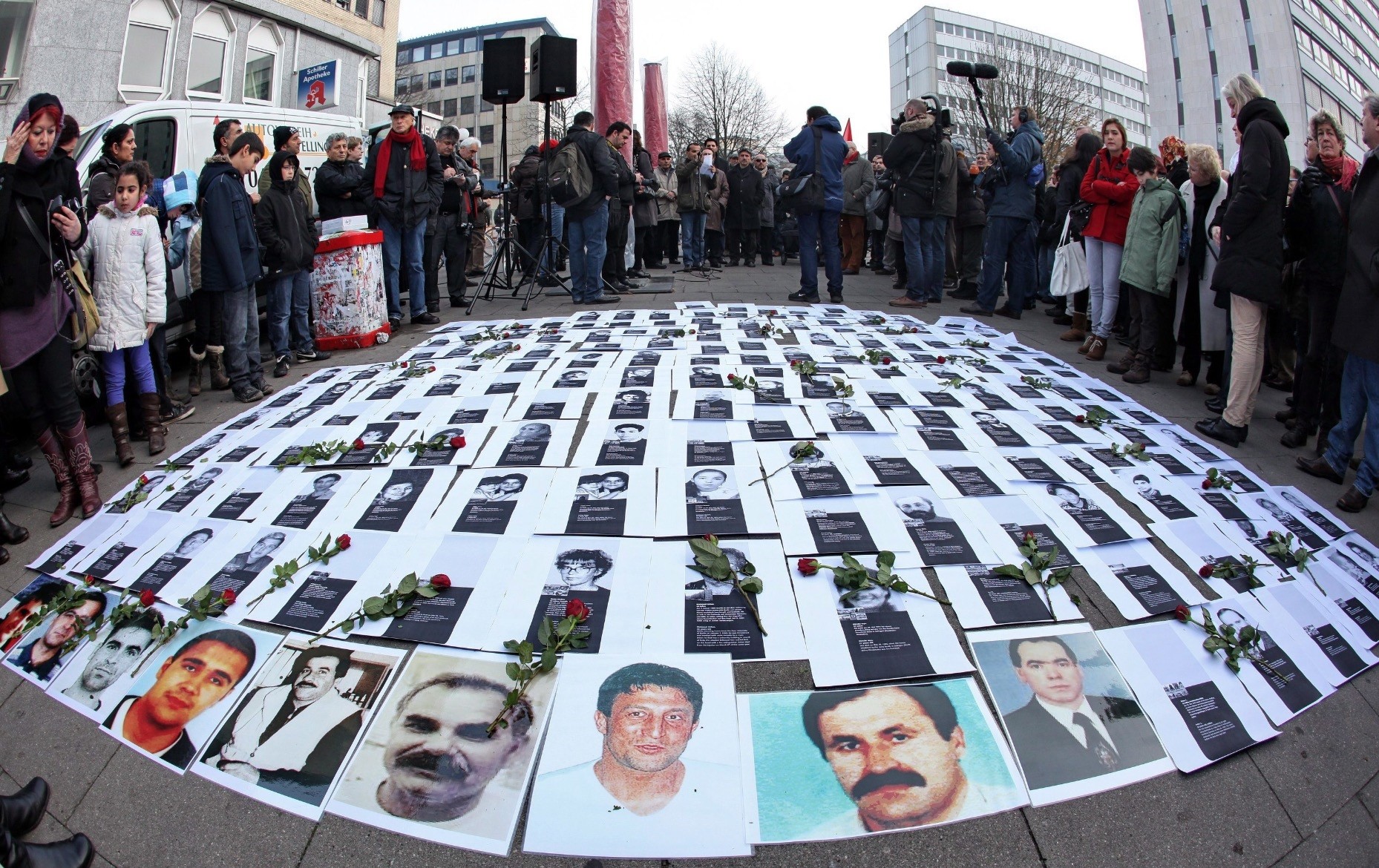 Photos of neo-Nazi violence victims lie in Germany on a street, with NSU victims on the front row, during a protest in Hamburg in 2011.
by Compiled from Wire Services Jun 06, 2018 12:00 am

The defense team of Beate Zschaepe, the only surviving member of a German neo-Nazi gang that murdered eight Turks in Germany, asked for her immediate release in yesterday's hearing as they made final pleas in the drawn-out trial

The long drawn-out trial of alleged neo-Nazi terrorist Beate Zschaepe, accused of involvement in a number of racist murders and attacks carried out by the National Socialist Underground (NSU), entered its final stages yesterday with a demand for her release. Zschaepe's three original government-appointed defense lawyers - Wolfgang Heer, Wolfgang Stahl and Anja Sturm - demanded her immediate release as they delivered their closing arguments to the Upper Regional Court in the southern city of Munich. "The only crime she could be accused of was simple arson," Heer said. Zschaepe, 43, the main defendant in the trial, is accused of being an accomplice in the killings of eight Turkish immigrants, a Greek citizen and a German policewoman between 2000 and 2007 by the NSU, as well as a 2004 bombing in Cologne and other criminal acts.

The final defense arguments, expected to continue for a few more days, are the last stage in the trial that was launched in May 2013. Zschaepe has admitted living in the right-wing underground for almost 14 years with the two NSU terrorists, Uwe Boehnhardt and Uwe Mundlos, both of whom are now dead. Boehnhardt and Mundlos are believed to have carried out all 10 murders for racist reasons and because of a hatred of the German state.

The Federal Prosecutor's Office, whose arguments finished early February, demands that she receive a life sentence, while two rival defense lawyers she appointed herself requested a maximum sentence of 10 years for aggravated arson and aiding several robberies. German media outlets reported that a verdict is expected "mid-summer" barring any obstructions on the part of the defense team aimed at prolonging the trial.

Closely watched by the Turkish community, the trial may conclude with no insight into the alleged role or cover-up of authorities and activities of the gang, something voiced by the trial's critics.

The trial started two years after Beate Zschaepe set fire to a house she shared with Mündlos and Böhnhardt as they killed themselves when police closed in on them following a botched robbery. Along with Zschaepe, four defendants are on the dock for aiding and abetting the gang. They wrapped up their defenses in earlier weeks, denying allegations.

Zschaepe herself denied the murder charges earlier and said through her lawyer that she only felt guilty for not stopping Mündlos and Böhnhardt. Zschaepe is also on trial over two bombings in Cologne that targeted neighborhoods with predominantly migrant populations and 15 bank robberies.

Blunders on the part of authorities investigating the NSU or "coincidences" leading to the destruction of critical evidence have been piling up in the case since the gang's existence was made public in 2011. Critics of the case claim police and intelligence services that hired people from the neo-Nazi scene as informants tried to erase their tracks leading to the NSU case. Despite its links to many gangs in Germany's neo-Nazi scene, the NSU apparently went unnoticed for years, from the late 1990s to 2011. Authorities initially blamed domestic disputes in the Turkish community for the murders and other crimes between 2000 and 2007. Turkey has criticized the lengthy trial and the Turkish embassy in Berlin tweeted recently "justice delayed is justice denied." "Our common expectation is that the trial will end with a just decision that will uncover the background of these murders as well as the ties of these thugs," the embassy tweeted.

Figures by human rights groups show at least 184 people were killed in Germany by the neo-Nazi violence in the past three decades. Germany's security agencies, from police to intelligence, are under fire for turning a blind eye to far-right scene in the past, paving the way for NSU's crime spree.