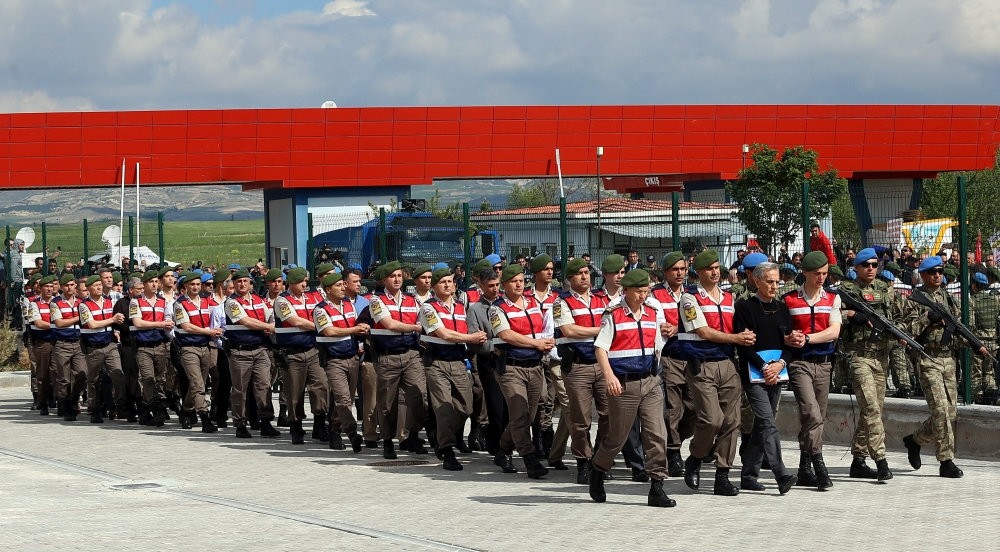 Gendarme officers accompany Aku0131n u00d6ztu00fcrk and other defendants to a courthouse in the capital Ankara. u00d6ztu00fcrk is accused of being a ringleader of the putschists.
by Daily Sabah Sep 07, 2018 12:00 am

Justice Minister Abdülhamid Gül announced yesterday that they expected most trials concerning the July 15, 2016 coup attempt to wrap up by the end of this year, describing the process "a success for the Turkish judiciary" thanks to its "swiftness."

The Gülenist Terror Group (FETÖ) is accused of carrying out the coup attempt that killed 250 people, by using its infiltrators in the military.

Speaking to reporters in the capital Ankara, Gül said there has been a large number of cases both on the coup attempt and FETÖ and the public was especially keen on the conclusion of coup-related cases. He said there were 32,370 people being held and incarcerated in FETÖ cases and 289 trials directly related to the coup attempt. "Approximately 203 of them concluded and the rest are underway. There are 4,091 defendants," Gül said. The minister noted that they improved a digital case network allowing courts to easily access similar cases to help a faster judiciary process on the coup cases. Turkey also increased the number of courtrooms to accommodate the large number of defendants.

"Our judges and prosecutors are undertaking cases. There may be a few cases like Akıncı where there are a large number of defendants that can drag on [until next year], but we hope all trials will conclude by the end of the year. This is a great accomplishment for the Turkish judiciary," he said. The Akıncı case he was referring to was an eponymous air base in the capital Ankara that was used as command center by the putschists. A total of 460 defendants, including former Air Force Cmdr. Akın Öztürk, who is accused of being the ringleader of the putschists, are on trial in the Akıncı case.

A total of 2,619 people have been found guilty, and 1,760 have been sentenced to life imprisonment in the coup trials held across the country so far.

Some 803 of the accused, including a general and commissioned and noncommissioned officers, were sentenced to life imprisonment without the possibility of parole. Some 957 others were sentenced to life imprisonment with 859 sentenced to prison terms ranging from one year and two months to 20 years. Many privates doing their compulsory military service have been found not guilty by the courts.Thousands of people were arrested or detained in the aftermath of the coup attempt. Authorities say infiltrators of FETÖ in the military carried out the coup attempt perpetrated by a group of high-ranking military officers calling themselves the Peace At Home Council. Ankara says the council, instructed by FETÖ leader Fetullah Gülen, planned the coup attempt at a meeting with Adil Öksüz, the fugitive mastermind of the attempt. Öksüz is a point man for Gülen, who is believed to still control a large number of military infiltrators.

Defendants in coup cases, mostly those caught red-handed, stuck to denial in their hearings, blaming others for their actions on July 15. Some even claimed it was not them in security camera footage openly showing them attacking anti-coup military officers, much to the chagrin of families of victims watching the trials. Legal experts say that the defendants are seeking to prolong trials as FETÖ keeps their jailed followers' hopes high for the possibility of release through messages by Gülen who lives in Pennsylvania in the United States.

FETÖ planted its men and women in every institution - from the army to law enforcement - for decades before it openly declared war against the state with two coup attempts in 2013. Disguised with code names, secretive correspondences and a distinct secular lifestyle worlds away from what FETÖ promoted as religious life, its members easily infiltrated into the places they ultimately aimed to take over.