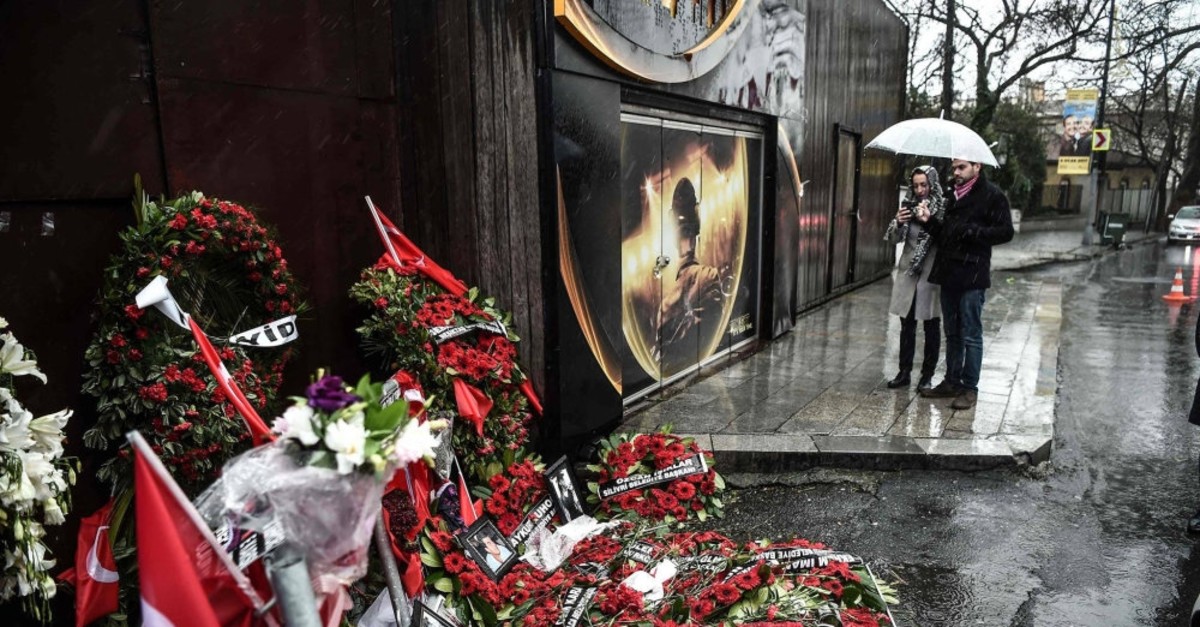 Flowers placed in front of Reina night club following the 2017 attack. It was the last large-scale terror attack by Daesh in Turkey.
by Daily Sabah May 17, 2019 12:06 am

Abdulgadir Masharipov was back in the dock Thursday as his trial for killing 39 people on behalf of the terrorist group Daesh two years ago resumed in Istanbul.

Uzbekistan-born Masharipov is among 58 defendants being tried for an attack at Reina, a popular Istanbul nightclub on the shore of the Bosporus. He was accused of storming the venue during New Year celebrations in 2017 and gunning down revelers with his AK-47 rifle. The militant was captured in a Daesh hideout in the city a few weeks after the attack and is among 20 jailed defendants in the case, while the rest are either fugitives or those released pending trial.

The hearing is being held in a high-security courthouse located across the street from the Silivri prison complex that houses terror convicts and suspects from the PKK and Daesh members to military officers involved in the 2016 coup attempt by the Gülenist Terror Group (FETÖ). Masharipov personally came to the courtroom, while some defendants were set to testify from prison via videolink.

In yesterday's hearing, the court ruled for release of Masharipov's wife Zarina Nurullayeva and Tene Traore, Masharipov's female life partner. Both were banned from traveling abroad.

Masharipov was silent in the previous hearings and presented his oral defense for the first time in a hearing in February, denying the charges against him. He claimed he was not the attacker despite mounting evidence against him. He has also claimed he was sleeping on Jan. 2, 2017, when a friend woke him up and showed him his photos on news websites associating him with the attack. He claimed he was "shocked" upon seeing the news. Other defendants in the case include Daesh suspects who instructed him to carry out the attack, those who helped him hide from authorities while he was on the run and his associates in the terrorist group.

An indictment concerning the attack includes complaints by families of 39 victims as well as 122 others who were injured or mentally affected by the attack. Prosecutors ask for 40 instances of aggravated life imprisonment for Masharipov for killing 39 people and on the charge of "attempt to overthrow the constitutional order," the crime with the highest sentence under the Turkish penal code. Additional charges against him are membership in a terrorist group, attempted murder and violation of the Firearms Law, which carry prison terms ranging from seven to 2,370 years.

Ilyas Mamasharipov, who is among the jailed defendants, also faces 40 aggravated life sentences for his role as a "planner of the attack," prosecutors say. Other defendants face lesser charges for aiding and abetting Masharipov and other Daesh suspects.