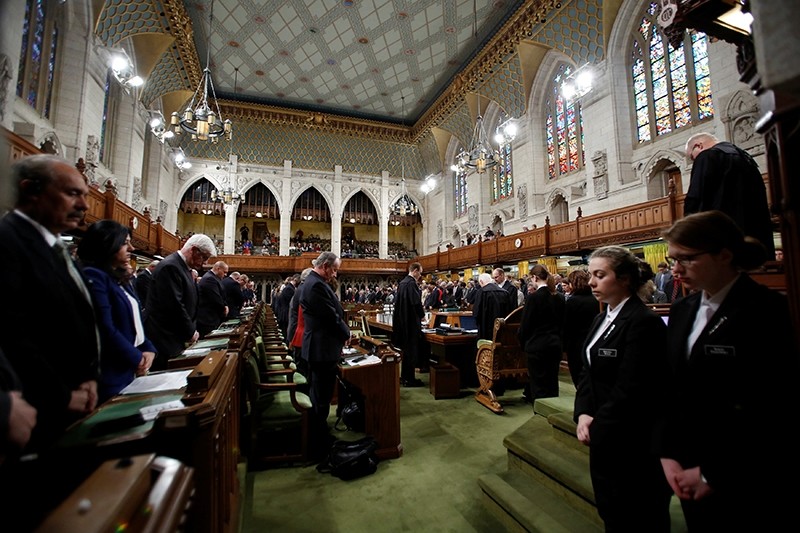 Members of Parliament take part in a moment of silence after party leaders delivered statements on a deadly shooting at a Quebec City mosque (Reuters Photo)
by Anadolu Agency Feb 09, 2017 12:00 am

Muslim leaders on Wednesday sent a letter to the Canadian Parliament that requested the government institute to take measures to combat Islamophobia.

They also asked that Jan. 29, the day a lone gunman killed six worshipers in a Quebec City mosque, be declared as an annual national day of remembrance.

The request for the recognition of Jan. 29 was in the form of an open letter to Canadian citizens and the government, according to the Canadian Broadcasting Corporation (CBC).

The letter was read by the executive director of the National Council of Canadian Muslims at a news conference on Parliament Hill in the Canadian capital of Ottawa.

The Executive Director of the National Council of Canadian Muslims (NCCM) Ihsaan Gardee first thanked Canadians for their outpouring of sympathy and solidarity following the Jan. 29 killings, which also left 19 others wounded.

He then asked Canadians to take action to curb Islamophobia and listed suggestions for the federal, provincial and municipal levels of government.

"How can we work harder to stamp out hate against anyone?" Gardee said, as reported by the CBC.

The Muslim leaders laid out steps, including more money to train police at the community level about how to deal with hate crimes and public annual reviews of hate crimes.

At the provincial level, they suggested the creation of an anti-racism committee to oversee issues of racism and support education campaigns, as well as institute a course on racism to be taught in high school.

At the federal level, the letter called for all members of Parliament to support Motion 103, a bill to study ways of reducing Islamophobia, Global News television reported.

Haroun Bouzzi, co-president of the Association of Muslims and Arabs for a Secular Quebec, said: "We're not saying Canada or Quebec are racist. But there are racist systems and sexist systems."

Mohamed Yangui, president of the Centre Culturel Islamique de Quebec said the Muslim community is a victim of ignorance.

"We hope our government follows the recommendations in the open letter, not only for the Muslim community but for all communities," he said.

Motion 103 is set to be debated in Parliament next week, Global reported.